What does the Higgs boson turn itself into? Large Hadron Collider confirms theory 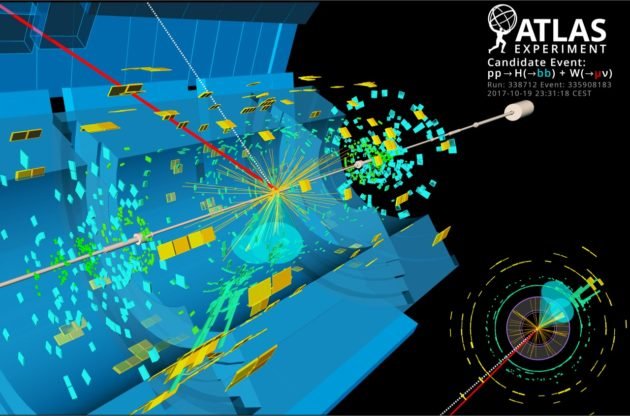 What does the Higgs boson turn itself into? Large Hadron Collider confirms theory

It’s been six years since physicists at Europe’s Large Hadron Collider announced the discovery of the Higgs boson, but they’re just now confirming what most of the mysterious subatomic particles do when they decay.

That’s not exactly a surprise: The mainstream theory of particle physics, known as the Standard Model, suggests that’s the most common course followed by the Higgs, which exists in the particle collider for only an instant before breaking down. About 60 percent of the Higgs bosons created in high-energy are thought to turn into a pair of bottom quarks, which is No. 2 on the mass scale for six “flavors” of quarks.

It took several years for researchers to nail down the evidence to a standard significance of 5-sigma — the same standard that applied to the Higgs boson’s discovery in 2012.

One reason it took so long is that there are many other ways for particle interactions to produce bottom-bottom quark pairs. Researchers using the LHC’s two main detectors — known as CMS (Compact Muon Solenoid) and ATLAS (A Large Ion Collider Experiment) — had to sift through billions of data points from two collider runs to boost their confidence sufficiently.

Physicists at the 17-mile-round Large Hadron Collider have now confirmed that the Higgs boson can be coupled with the bottom quark as well as the heaviest known elementary particle, the top quark, plus another subatomic particle known as the tau lepton. And that’s just the start.

“The Higgs boson is an integral component of our universe and theorized to give all fundamental particles their mass,” Patty McBride, a researcher at the U.S. Department of Energy’s Fermi National Accelerator Laboratory who serves as a deputy spokesperson for the LHC’s Compact Muon Solenoid collaboration, said in a news release. “But we haven’t yet confirmed exactly how this field interacts — or even if it interacts — with all the particles we know about, or if it interacts with dark matter particles, which remain to be detected.”

Close analysis of the Higgs’ transition to other particles could shed light on such interactions. For example, researchers will be looking for evidence of the predicted breakdown of Higgs bosons into pairs of less massive particles known as muons. They’ll also be looking for any deviations from theoretical predictions that could point the way to physics beyond the Standard Model.

“If we measure all the predicted ways the Higgs can decay and they don’t sum up to 100 percent, it could mean there is something else coupling to the Higgs, like dark matter,” Jason Nielsen, a physicist at the University of California at Santa Cruz and associate director of the Santa Cruz Institute for Particle Physics, explained in a news release.

Eckhard Elsen, CERN’s director for research and computing, said the latest results demonstrate that analysis methods have gotten precise enough to explore the full landscape of particle physics, “including hopefully new physics that so far hides so subtly.”

“The experiments continue to home in on the Higgs particle, which is often considered a portal to new physics,” Elsen said in a news release. “These beautiful and early achievements also underscore our plans for upgrading the LHC to substantially increase the statistics.”