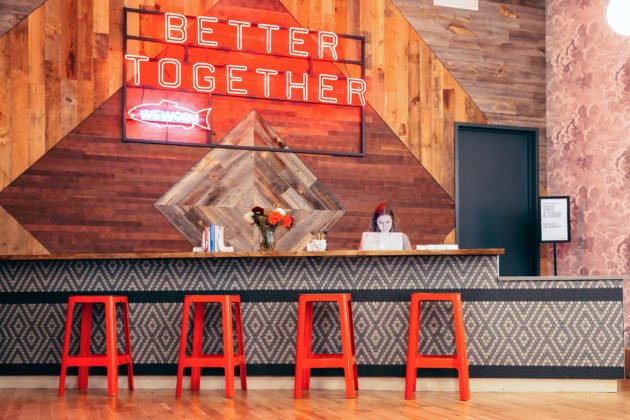 WeWork is in the midst of a massive expansion that will more than double its presence in the Seattle area and make the co-working giant one of the biggest tenants in the region.

The company rarely breaks out its presence in terms of square feet, but Jon Slavet, WeWork’s managing director for the west, pulled back the curtain on the company’s Seattle footprint in an interview with GeekWire. WeWork today has about 900,000 square feet of space spread across seven Seattle-area office buildings, and by early next year that figure will balloon to 1.5 million feet spread across 14 buildings, with even more activity further down the line.

A footprint of 1.5 million square feet would be roughly the size of the Columbia Center, Seattle’s tallest and largest office building. The New York-based company is acknowledging some of these new locations for the first time, while others are advertised on the its website.

Here is a snapshot of the WeWork offices set to open later this year into early 2019:

WeWork’s preferred metric to quantify its presence is the number of desks. In the Seattle area, that figure was 4,320 at the beginning of 2018, and the company expects to have 13,301 desks by early next year.

This expansion, the company said, makes WeWork one of the top office users in the region, along with homegrown names like Amazon, Microsoft, Boeing and Starbucks and ahead of some of the most active out-of-town giants like Google and Facebook.

“Seattle is a bright shining star for us,” Slavet said.

To put it in perspective, 14 locations makes Seattle WeWork’s biggest Northwest market by far, well ahead of Vancouver B.C. — five locations by the end of the year — and Portland with three.

WeWork’s Seattle presence is comparable to San Francisco and Los Angeles, with 17 and 16 locations respectively. All of that pales in comparison to the company’s hometown of New York, where WeWork has 54 locations.

Slavet said the region is one of the most dynamic markets in the world. It’s a combination of some of the fastest-growing companies in the tech industry and an ever-expanding roster of out-of-town companies needing space immediately, making the area fertile ground for WeWork’s model of providing flexible space quickly for companies of all sizes.

Worldwide, WeWork aims to have 400 locations in 83 cities in 27 countries by the end of the year. WeWork has raised gobs of cash to fund this expansion, bringing in a whopping $1 billion round earlier this month.

WeWork is at the forefront of a very active co-working industry that reflects the changing nature of how people and companies work. It wasn’t long ago that Seattle hit a milestone of 1 million square feet of co-working space in the city, and now WeWork has surpassed that metric on its own.

Though WeWork is the apple of the investment community’s collective eye, it isn’t the first, nor the only company in the co-working space. On a global level it battles companies like Regus, which has been around for close to 30 years and has more than 3,000 locations. The local market includes companies like The Riveter, Industrious, Atlas Workbase, Impact Hub and many more.

Founded in 2010, WeWork’s dizzying growth has come primarily within a years-long tech boom that has seen companies across the globe expand so fast the market demanded a quicker solution for setting up office space. By becoming one of the biggest office tenants in many cities and offering short-term leases, it could be stuck with the bill should the tech boom come crashing down.

For most of its lifetime, WeWork has been associated with providing small, flexible office spaces for startups getting off the ground and companies not yet ready to commit to a permanent office. But WeWork’s fastest growing business is servicing big companies with more than 1,000 employees.

The company’s short, flexible leases make sense for big companies parachuting into a new market. Enterprise companies can scale new offices fast, transferring folks from other locations around the world, so it can be difficult to pin down exactly how much space they need, making flexible lease terms desirable.

WeWork also serves as a release valve for companies outgrowing their permanent space. Speaker maker Sonos for the first time took space in a WeWork earlier this year as the rapid growth of its Seattle office bubbled over.

Today about 40 of Sonos’ 120 Seattle employees are based in WeWork’s Holyoke location, with the rest in the company’s swanky Seattle office in the super green Bullitt Center. Pete Pedersen, the company’s senior vice president of communications, said Sonos was “growing so darn fast” and needed space immediately.

WeWork isn’t done expanding in Seattle, and it teased several more locations in non-downtown neighborhoods like Capitol Hill, Fremont and Ballard. The company wouldn’t give many specifics about openings further down the line, though its website shows a couple of other future locations: an office at the 1201 Third Ave. downtown office building and a location at Martin Selig Real Estate’s 15th + Market project now under construction in Ballard that will also be home to a new Target location and is just down the road from the first AmazonFresh Pickup location.

Selig is the same developer who is hosting the first WeLive location in Seattle. The concept focuses on community living, with WeWork furnishing units that people can rent by the day, week, month or year.

In 2020, the Seattle WeLive will open in Selig’s 36-story Third & Lenora tower, combined with scads of WeWork office space. Slavet didn’t give much new detail about the project, mentioning it will have a shared rooftop space for all members to go along with perks like a unique fitness experience and food and beverage options.

“It’s going to be a very cool experience and a flagship for us for live, work, play, all in one building, which is a big part of our founder’s vision,” Slavet said.