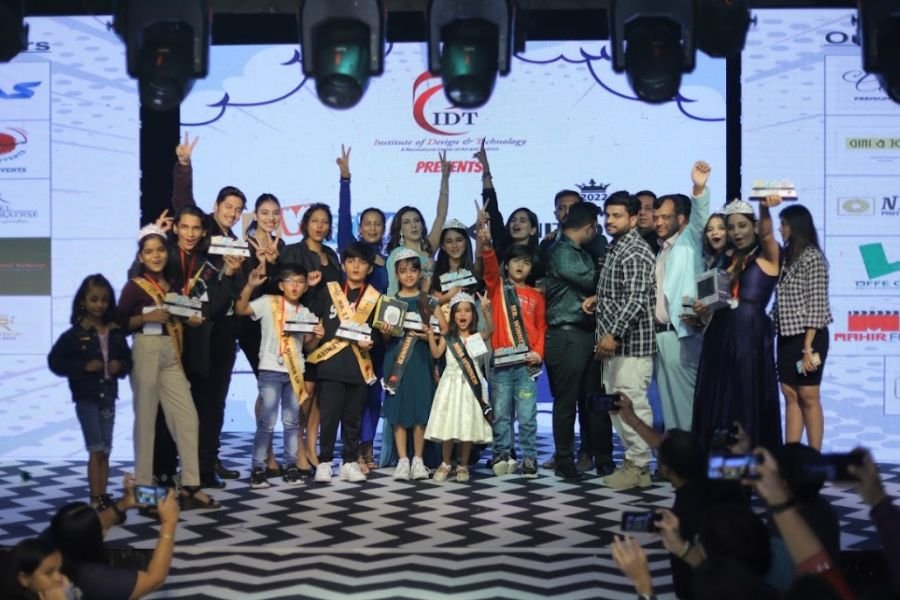 Surat (Gujarat) [India], January 10: On January 7, about 150 child models from across Gujarat took part in the grand finale of Gujarat Kids Fashion Week (GKFW) 2023 and United India Kids Season 3, which was hosted by the Institute of Design and Technology (IDT), a city-based renowned fashion design institution, and Abeera Events under the theme “Welcome G-20” at Agra Exotica on Dumas Road in Surat.

In keeping with tradition, ‘Welcome-2023’ commemorated the New Year celebrations of Jesus Christ. Approximately 5,000 students from various prominent schools in Gujarat and other states auditioned for the grand event in Surat. The jury panel of experts in their fields shortlisted 500 children in the first round, and finally, 150 child models were chosen for the final competition in Surat.

Siya Patel and Nilansh Desai were declared winners in the A-Category, Tara Gareja and Dhruv Solanki in the B-Category, and Vinan Damani and Vanshi Joshi in the C-Category.

United India Kids Show is a Surat-based company that produces child models for the Indian film and modelling industries. Karan and Pawani Patel organised the event, as did Anupam and Ankita Goyal, owners of GKFW.

GKFW 2023 featured a collection based on the theme of commercial creativity. IDT students beautifully and innovatively reimagined the world-famous “Disney” theme costumes. The Disney theme is well-known, and we see it in the form of princesses, castles, and beautiful scenery. The Disney-inspired line featured a variety of fabrics, surface embellishments, and adorable props. Can you imagine the connection between Disney and paper folding Origami? Or how about the American punch needle embroidery method? Students at IDT have cleverly created technologies that will revolutionize both fashion and the Disney market.

When we think of Disney Princesses, we think of gowns and tiaras, but the Dinsey theme by IDT designers featured a collection designed for Gen Z that included modern looks like shorts, skirts, and jackets.

The event was attended by IDT students from Gujarat’s Vapi and Junagadh centres, Chattisgarh’s Korba, and Kerala’s Kottayam.

IDT students and faculty members Pooja Gheewala, Ayushi Upreti, Imtiyaz Tailor, Malati Maina, and Riddhi Kanchwala worked tirelessly for more than two and a half months to make the show a huge success. Manas Sharma and his Mumbai team were in charge of the event’s choreography.

This year’s event was unique for IDT because it was designed to welcome the G20 to Surat and India through a social awareness theme. This theme was mentored by designer Gunjan Jain based on the concept that this year’s G-20 summit will be held in India, with representatives from more than 20 countries expected to attend under Prime Minister Narendra Modi’s leadership. The event’s guests will receive gifts made from ‘Sadeli Art,’ India’s traditional art form, preserved by Surat-based Artist Mr. Rakesh Petigara.

The principal and director of LP Savani School in Palanpur, Mr Ketan and Mr Kshitij, have been with the children since the beginning and have provided a venue for auditions and practice sessions. Ganesh Technologies has also contributed to the journey of gifting child models. All children were given headphones to encourage participation.