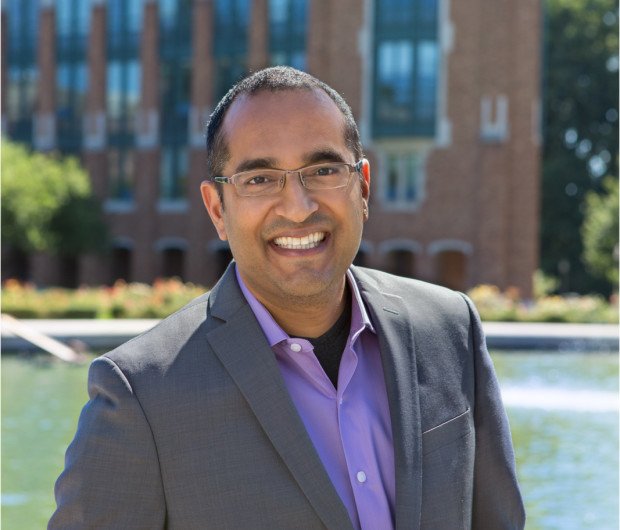 Jandhyala, 47, led the UW’s innovation center, CoMotion, for five years. Earlier this year, he announced that he would be stepping down in June. Cauce described him as “an innovator in every sense of the word, and someone for whom ‘inclusive innovation’ wasn’t just a catchphrase, but a guiding principle.”

She wrote, “This was core to his belief in combining innovation with empathy, because as he put it, ‘Once we understand someone else, compassion is what makes us want to help them.’ This advocacy for what Vikram called a ‘Seattle style of innovation’ can be seen in his leadership of CoMotion and in communities not just in the Puget Sound, but around the world.”

According to a 2015 profile in the UW’s alumni magazine Columns, Jandhyala was the son of two physics professors. He graduated from the Indian Institute of Technology in 1993 and attended graduate school at the University of Illinois.

Jandhyala was well-known in the Seattle tech community over the past two decades as a respected professor, researcher, founder, speaker, and champion of entrepreneurship. He first joined the UW faculty in 2000 and founded his own startup in 2007 called Nimbic that was later acquired by Mentor Graphics.

Jandhyala became chair of the UW’s electrical engineering department in 2011 and was named the university’s vice provost of innovation in June 2014. His title evolved into vice president of innovation strategy as Jandhyala led CoMotion, which helps startups through education and access to experts and funding sources.

Under the leadership of Jandhyala, the UW has ranked among the top 10 on Reuters’ list of the world’s most innovative universities for the past several years and cracked the top 10 of the Milken Institute national tech transfer rankings. CoMotion also helped open a makerspace on campus; created an Amazon Catalyst program; and launched the Mobility Innovation Center with Challenge Seattle.

He was the co-executive director of the Global Innovation Exchange (GIX), a new U.S.-China joint technology innovation institute run in Bellevue, Wash., by the UW and China’s Tsinghua University, which recently graduated its first class. He planned to dedicate more time to the program after leaving CoMotion.

Jandhyala is survived by two sons, ages 5 and 7, according to a GoFundMe campaign page seeking financial support to cover basic living costs for his children. His wife, Suja Vaidyanathan, writes on that page that she and Jandhyala remained married, but had lived separate lives for a few years.

“Vikram was a complex person and our relationship was equally complex,” Vaidyanathan wrote. “The pressures of two high-stress careers, raising young children and some incompatibilities took a toll on our marriage. We could have worked through one or two of these pressure but our relationship couldn’t take all three.”

Vaidyanathan also said that the two were “highly supportive of each other’s life goals” and that “his life goal was to make entrepreneurship a part of higher education across all disciplines, not just technology.”

The news of Jandhyala’s death has stunned many people in the Seattle tech community. Madrona Venture Group, which provided seed funding in 2006 for his startup Nimbic, released this statement from its managing directors.

“Vikram was a close part of the Madrona family for years. He worked with us on the funding of a company thirteen years ago and since then we have worked with him in our business lives as well as had him as a part of our social fabric. He took CoMotion and made it a strong force of innovation for the entire ecosystem, making a real difference in the lives of students and professors. He gave so much to all of us and we are devastated by the news of his death.”

Microsoft President Brad Smith, who worked with Jandhyala on various projects including GIX, which received $40 million from Microsoft, offered this statement:

“I’m one of several people at Microsoft that benefited from working with Vikram and deeply appreciate his many vital contributions. He was instrumental in the founding and growth of GIX and the ability to bring together two great universities and build a bridge across the Pacific between two important countries. He always put students and education first and brought a calm and thoughtful approach that made it possible to solve almost any problem. We will miss him.”

Shwetak Patel, an endowed professor of computer science and electrical engineering at the UW, told GeekWire Wednesday that Jandhyala was one of the first faculty members to recruit him to the university.

“He’s one of the reasons why I came to UW,” said Patel, who worked with Jandhyala at GIX and CoMotion. “He bent over backwards for students. He was so passionate about the faculty and students and genuinely cared. How many VPs are still teaching at that level, or engaging at an individual level with the students?”

As Patel’s own star rose and he assumed leadership positions of his own, he was inspired by Jandhyala and his ability to maintain a connection to research. And it gave Patel hope that that was possible on top of all other responsibilities.

“He was a friend, a colleague and a mentor. He was just inspirational,” Patel said. “He worked on difficult problems and persevered through it and really did it with an incredible amount of class. He touched the lives of so many different people.”

“What I loved about Vikram was that he was willing to think in very new ways,” she said. “He partnered with Ana Mari to really bring the innovation of the university out to the community in a way that it never had before. He was just a lovely man — so smart, so committed, so energetic, and really led by example. He was just a fabulous guy.”

Linden Rhoads, who preceded Jandhyala as the leader of CoMotion, said the news was “devastating.” Rhoads said she couldn’t think of anyone better to replace her at CoMotion in 2014, citing his entrepreneurial and academic chops. They knew each other long before the transition and kept in touch in recent years; Jandhyala attended her wedding last year.

“He really helped the university to develop the reputation for the incredible things that are happening there,” Rhoads said. “He brought the innovation message out, in addition to the programs and services he created.”

Ken Myer, a Seattle startup advisor and leadership lecturer at the UW’s Foster School of Business, called it a “very sad day for all of us who knew and worked with Vikram.”

“He had a wonderful nature — kind, funny, and generous — with a deeply curious intelligence,” Myer said in an email. “I’ve rarely met anyone who could comfortably move from a technical conversation about internet search algorithms to a broad conversation about the importance of making innovation inclusive to all of society (never missing an opportunity to throw in a bit of humor in between!). He will be deeply missed and has left a lasting contribution to the University of Washington and our community.”

In a Feb. 28 post titled “Transitions” on Medium, Jandhyala shared his thoughts on life changes, writing that he was “personally going through a challenging one right now.”

He said that transitions “whether chosen or forced, are particularly difficult when you are moving on from something you have put all your heart, soul, belief, effort, and time into. It is doubly hard when it is not just you but a dedicated, loving, high-functioning team who believes in a common vision that has put in all that effort. People matter immensely.”

He said that his personal take didn’t offer any business or leadership wisdom, but that he believed “self reflection at times of transition can be additionally focused and energized through these crucibles.”

“Sometimes, to paraphrase (and misquote!) a great role model and technology leader and friend I would have loved to work for and with, it’s time to “hit reset,” Jandhyala wrote, in an apparent reference to “Hit Refresh,” Microsoft CEO Satya Nadella’s 2017 book. “And if that soft reset doesn’t work, to turn the power off and back on and hopefully to see something fresh and different.”

In a 2015 Geek of the Week profile, answering a traditional question at the end of our questionnaire, Jandhyala offered these “final words of advice” for his fellow geeks: “Try to be inclusive, not exclusive. Technology is great. Think about how it can solve real problems for all people. Think about how technology itself can include all people.”

GeekWire’s Taylor Soper and Kurt Schlosser contributed to this report.