Understanding the Universe of Banarasi Sari 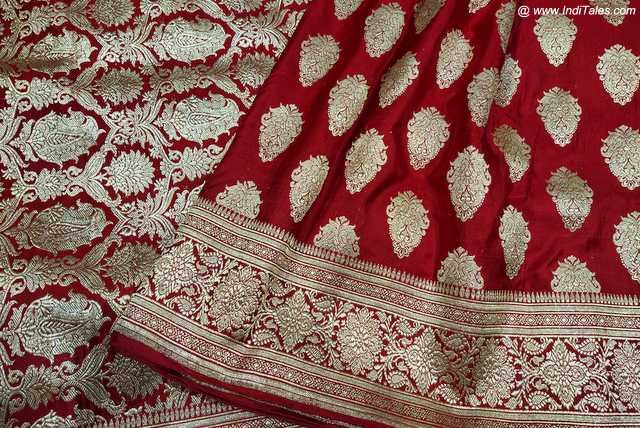 Understanding the Universe of Banarasi Sari

Banarasi Sari is every Indian woman’s dream drape. In North India, it is the de facto choice for weddings and all such auspicious occasions. Woven from the unbroken thread created by the silkworm, this unstitched fabric carries the culture of the land in its folds. Silk Saris are well woven into the cultural fabric of India in a way that both are interdependent on each other.

Most of us associate Banarasi Sari with pure silk in bright colors, full of designs in Zari. The long-standing tradition of Banarasi Silk though comes in various yarns, weaves, designs, and patterns. Let us try to understand the universe of Banarasi Sari.

Banarasi silk saris can be classified on the basis of material used, on weaving techniques, and on designs woven on them. Between them there are infinite permutations and combinations possible, so we will try to understand the basics of each of them.

Banarasi Saris are primarily woven using soft Mulberry silk that is produced in parts of India like the Bangalore region, Tamil Nadu, Kashmir, and also from China. Tussar is the next yarn of choice for Banarasi weavers. Other varieties can be classified more in the experimental category. To meet the different ranges of requirements, cotton and synthetic fiber are also used by weavers. In this post, we shall focus on the pure silk varieties only.

Katan silk is the most famous silk Sari from Banaras, known for its softness and shine. It is woven using pure mulberry silk in both warp and weft. Technically, it is a two-ply twisted yarn of Mulberry silk with 28-32 twists per inch (TPI).

If the single-ply twisted yarn is used, it is called Fletcher Silk. You can also think of twice of Fletcher as Katan silk.

Kora Silk is the same as Katan silk, but the silk yarn used is without de-gumming. This means the gum is not completely removed from the yarn, making it stiff. That is why Kora silk is just a stiffer version of Katan silk. It can also be seen as unbleached Katan silk in both warp and weft.

Besides these Tussar, Muga and Eri are also used for weaving Banarasi Sari in Silk.

Tanchoi is a dream weave from Banaras. Most of us know it for the intricately woven pattern all over the Sari that charmingly carries the shine of silk thread. It is a weaving technique that uses a single or double warp and five or six colors in the weft. Floral patterns are most common in Tanchoi Saris but sometimes we also see birds like peacocks and parrots woven in silk. Overall, these Saris give the look of a tapestry.

Well, this time in Varanasi I learned that there are many varieties of Tanchoi Saris. Let us look at some of them:

Satan Tanchoi in Flat Weave – You will not see any threads on the backside of this Sari.

Satan Tanchoi in Float Weave – The extra threads have to be cut to finish the Sari. Sometimes a net is added to the backside to avoid getting entangled in the hanging threads.

Do-Dama Tanchoi – Technically it is called 2 up/2 down float weave hence the name Do Dama. It is also a name used for a fixed loom.

Vascot Tanchoi – This Tanchoi Sari can be used from both sides; the weave is so fine. It uses the float weave technique, but the float is tiny, usually less than half an inch.

Dampanch weave in Tanchoi – This is a weaving technique where about 25% of the thread is used to lock the pattern. This ensures that the thread does not come out eventually. It also makes the pattern flat leaving no embossed effect despite the multiple threads used.

Jamdani weave has each Buti woven individually using small shuttles in a floatless weave. It is like fine embroidery done using weaving. Traditionally, Jamdani saris use the shades of the same color, giving Saris the names of the primary color like Shwetambari for white, Nilambari for Blue, Raktambari for red, and Pitambari for yellow.

Rang kaat Sari is a variant of Jamdani Sari that uses upto 10 different colors for the base of Sari while the designs are made using Zari.

Kadhua is another name of Jamdani weave.

Now, who does not love Banarasi brocades! It is known for its prominent embossed look mostly done using golden zari but sometimes also in silk threads. From a distance it looks like the design is sculpted on the cloth, it is probably the most ornamental weave one can have. It gives a rich royal look to the wearer.

Brocade is basically a Satan (Do-dama or twill weave) that again comes in two varieties – Sateen and Satin. Sateen has double weft and Satin has double warp. Both flat and float weaves are used to weave Brocade Saris. Float weaves are heavier as all the Zari stays in the fabric while a larger part of it is cut off in the flat weaves. The latter I am told are being preferred these days due to being lightweight.

Between these, there are different varieties of Brocade weaves possible – Satan or Dodama, Sateen or Satin, Flat or Float. Possibilities as always are infinite.

Chiffon is a weave that uses a single highly twisted thread with a right and left twist in both weft and warp. It is this weave that gives it the light crumpled look. You get Chiffon woven with pure silk or other threads.

Georgette is another highly twisted yarn with 40+ TPI or twists per inch. It typically uses 2 threads of silk and 2 of viscose.

You might have often read the word Kadhua for Banarasi Saris. Well, it is the technique of pattern making, where each Buti is hand-made by the weaver. So, these Butis have a very fine finish both in the front and back. Kadhua requires a high level of skill to weave these small and intricate patterns by hand. No wonder, these are highly prized saris. It is also called Jamdani weave.

Kadhua comes from kaadhna or embroidering, as the technique is close to embroidering each and every Buti manually on the Sari. This can be done only on handloom weaves.

Pro Tip – Due to the intricacy involved, the Butis in Kadhua Banarasi Sari are never too close.

Fekhua literally means throwing. This is a technique that throws the shuttle from one side to another to weave the patterns. This technique is relatively easy, but it leaves a lot of thread floating at the back. This floating thread then needs to be removed by cutting to give a finishing touch to the Sari. Sometimes, the float is left as such and the users put a net to avoid getting entangled in the sea of hanging threads.

Most closed patterns like Jaals are woven using the Fekhua technique. Power looms use only this technique for weaving.

This is a weaving technique that replicates the Minakari Jewellery on fabric. It uses a contrasting color to highlight a small part of the Buti, like the eye of a fish. Mina incidentally means fish in Sanskrit. When you see a colored drop woven on a golden buti to highlight it – It is Mina Buti

Technically, it is an additional weft on top of Buti in a different color. Usually, red or green color is used to create a droplet on golden buti. Depending on the number of colors, Mina Buti has different names:

Alfi – When a single color of Mina is used

Tilfi – When two colors of Mina is used

There are names for colors more than 2, but those are not very common.

When done on Kataan Silk, it is called Katan Mina Buti Sari.

Every weaving region has its own signature designs. I found the weavers in Peeli Kothi area of Varanasi very experimental with their weaves. I saw an award-winning royal blue Sari where the Kashmiri embroidery was woven into the Sari using the Jamdani technique. The Sari brings together the design of Kashmir in the weaves of Kashi in a single expression.

Kairi or Paisley is the most popular motif of Banaras, almost a marker for Banarasi Saris. The name of this pattern is found in all Indian languages, and it mostly means the shape of raw mango. Mango is a common fruit across India is bound to find its way on the textiles.

Locally called ‘Kairi’, it can be found in all sizes in all possible color combinations on the Banarasi Saris. Paisley incidentally is also a small town in Scotland which was also a weaving hub, where this design used to be woven on shawls.

Let us look at some of the popular motifs used by Banarasi weavers:

Buti – The small floral motifs that are sprinkled across the body of the Sari. In the masterpiece above there are 117 different types of Butis. Lotus, Kalash or pot remain popular motifs besides different flowers. Very closely arranged closed dots are called Fardibuti. Very small Buti is called MasurButi (resembling the Masur Daal) or Makhi Buti that resembles a fly.

Buta – It is the larger version of a Buti. It typically goes on the Palla or the borders.

Jaal – the grander and heavier Banarasi Saris are full of Zari patterns in the form of a net or jaal. These jaals can be created using straight or slanted lines, sometimes even wave like lines. Those with slanted or diagonal lines are called Aada Jaal and with straight lines is Seedha Jaal. One with Kairi motifs is called Kairi Jaal or Buti Jaal. The heavier jaal is called Vishwakarma jaal. Vishwakarma as we know is the deity of skilled people like weavers and sculptors.

Bel – Bel means a vine or creeper. A floral creeper woven in a diagonal pattern is called Aari Bel. The vertical creeper is called Haravva and the horizontal one is Kharibel.

Konia – The Paisley design in the corner is called Konia – literally meaning the corner. Sometimes leaves are used to enhance the design.

Chashpahani – An extra thread used to highlight the beginning of the border on Sari. It can be of different colors or Zari to highlight.

Kadhiyal Sari – Banarasi Saris usually come in a single color, unlike Saris in south India that comes in contrast borders. However, when they do make Saris with a different colored border, they call it Kadhiyal Sari. This Sari in Banaras keeps going in and out of fashion, depending on the fashion trends.

Skirt Sari – A Sari with a narrow border on one side and a broad border on the other.

Sadhe-Saat or Seven and a half Gaa Sari

The master weaver Maqbool Hassan ji told me that the Saris were originally sade-saat Gaja or roughly seven meters long. Slowly its size reduced and now it is typically five and a half gaja or five meters. It immediately reminded me of the Navari Sari of Maharashtra and Tamil Nadu that is still worn by the brides there.

Perpetual innovation is the lifeblood of any industry. While the core of Banarasi weaving revolves around traditional Saris, the weavers here are constantly experimenting with new weaves and products. Some such innovations include:

In this post, we have looked at the pure silk Saris only. Banarasi weavers do weave with other materials such as cotton, cotton with silk, and wool. That would call for another post another day.

If you have any questions about Banarasi Sari, do share them with us in the comments. We would try to address them in future posts.

This post has been written in association with the Silk Mark Organization of India.

The post Understanding the Universe of Banarasi Sari appeared first on Inditales.