We are all aware of the tragedy that Kerala went through recently with the loss of life and property exceeding unimaginable numbers.

People from all over the country came together and contributed in whatever way they could to the flood-hit state.

Celebrities and officials from all over the country also lent out helping hands.

But in midst of it all, there was one person who worked in the relief camps and collection centres as a volunteer without letting anyone know of his true identity.

Kannan Gopinathan, the district collector of Dadra and Nagar Haveli, reportedly took a personal leave from his job to come out help out his state in times of need.

#Thread Here’s an incredible story about a young man who was busy with loading and unloading in #KeralaFloods relief centres. Only days later people came to know that he was none other than, Kannan Gopinathan, the Collector of Dadra & Nagar Haveli! (1/n) pic.twitter.com/PICbgoHn70

The young bureaucrat, who hails from the city of Kottayam stepped in to help out in whatever way he could. According to this report, he did all kinds of manual work and worked all day long.

According to this Twitter thread, he even travelled in KSRTC buses and went through 5 districts in 10 days as just another volunteer. Even his own family wasn’t aware of his presence in the state.

It was only after the district collector of Ernakulum visited the relief funds that he recognised the young gentleman. Even when someone questioned his identity, he introduced himself as an NGO worker.

It restores our faith in humanity when there are people who do their job and serve the nation but also help out as citizens when needed. 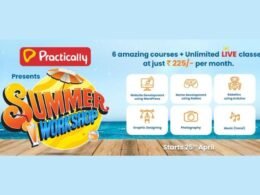 ~Avail Practically Live subscription at just INR 225/- p.m. Inclusive of a free summer workshop that begins on…
bywissen
No comments

The Brazil Open Used Shelter Dogs As Ballboys & Why Isn’t This A Norm At Every Tournament, Already?

For a lot of people, including me, it is becoming increasingly tough to concentrate on the matches at…
bywissen
No comments

With Just 80 Of Them Left, The Sumatran Rhino Could Soon Be Wiped Off From The Face Of The Earth

The world’s smallest rhinoceros, the Sumatran Rhino, once the pride and joy of South-East Asia is on the…
bywissen
No comments

Ever since I was a child, I have been on the heavier side of the body-weight spectrum. For…
bywissen
No comments