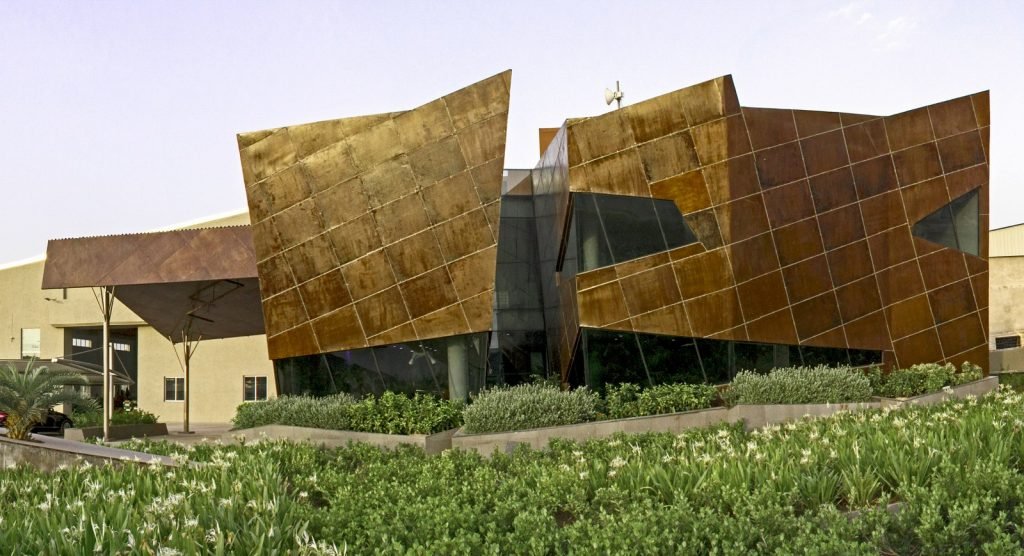 In contrast to its industrial vicinity which is highly polluted, noisy, and dusty, this corporate office building was designed to stand out, as a personified knight shielded by its armor of metal. Construction of the first-floor extension was completed in 2016.

The client, a multinational company founded in Ahmedabad, builds machines used to manufacture TMT bars. The brief was to create a building that speaks for itself and conveys a basic idea about the company’s product. Thus, the building’s form and surfaces also portray the basic properties of metal – ductility, and malleability. The metal exterior represents the material that the company works with.

Every wall and ceiling has an angular surface and forms unique geometrical patterns. The tapering walls are in RCC which is tied to the slabs and columns; then cladded with especially rusted metal sheets. The porch is supported by stainless steel columns to complement the overall metallic appearance.

Machines play a vital role in any manufacturing unit. The office structure is planned with machine aesthetics for the exterior as well as interior. The form of the structure is created with a lot of eccentric angles, giving rise to inclined walls and asymmetrical windows. Right from the front elevation to the cabins of the officials, triangular geometric patterns have been used.

The building is cladded with corten steel sheets, eliminating the need for painting and giving it a rust like exposed look. Durability and resistance to the highly corrosive weather of the location made corten steel a highly preferred material, which was also representative of the industrial surroundings. A cavity between the external cladding and the structure was designed to create an insulating buffer against heat and rain.

At the reception, the back wall is paneled with mirrors at varied angles. These angular mirrors reflect the landscape seen through the windows. All the partition walls and paneling created on the premises follow the three point planar rule. As they say, the devil is in the detail! Lines that start from the corten steel cladding grooves continue to the window divisions to the planter tile joints to the tremix grooves in the driveway creating continuity in design.

The furniture layout is supple but still stands out amongst the angular surfaces. White furniture and lighting fixtures add elegance to this edgy construction.

The landscape of the premise follows the same angular language. Angular planters surround the building, the garden in front has splayed cuboids as tree planters and intersecting walkways cut through the garden.

The post This Building’s Form And Surfaces Portray The Basic Properties Of Metal | SferaBlu Architects appeared first on The Architects Diary.

An Exposed Brick House Which Coexists With Nature | PG Associates