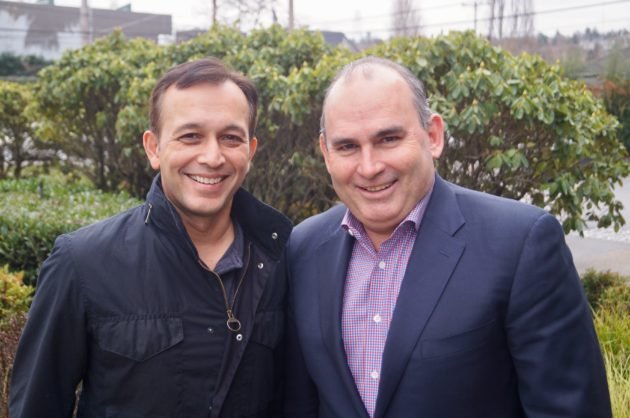 Nearly three years ago, Mike Hilton made a dramatic career change. After leading Concur for more than 20 years, and selling the expense management technology company to SAP for $8.3 billion, Hilton and fellow Concur co-founder Raj Singh took the reins at Accolade, then a 700-person healthcare company based in a suburb of Philadelphia.

With Singh as CEO and Hilton as COO, Accolade established a second headquarters in the Seattle region and began leveraging the experience and connections of its new leaders to boost its technology prowess. In a nutshell, the company’s service guides customers through the ins and outs of the healthcare system.

Since joining Accolade, Hilton has learned a lot about that system.

“Even though it’s an enormous space — $3 trillion a year — and it’s a very complex ecosystem, there’s not much technology at the core of it,” he said in an interview.

Accolade is one of a growing number of companies working to change the healthcare system using technology. Companies including Microsoft, Apple and notably Amazon have are increasingly moving into the healthcare space, and investment in healthcare companies is on the rise.

The space is still fraught with difficulties, from meeting strict privacy regulations to the challenge of entering a traditionally conservative market. Take Caradigm, a joint venture between Microsoft and GE Healthcare, based in the Seattle region, which fizzled out despite widespread early enthusiasm. The company was recently acquired by a Florida-based cancer diagnostic company.

Against that backdrop, Accolade has announced a series of milestones. It unveiled its AI-fueled healthcare personalization platform last year and in March it raised $50 million, topping $200 million in venture investment. On Wednesday, the company said it now serves 1.5 million employees and their families in the United States. Accolade’s employee base has grown to 900 people, with plans to add another “couple hundred” in the next year. About 100 of the company’s current employees are based in the Seattle region.

Accolade has combated that problem with everything from its app and online dashboard to the nurses and healthcare concierges who communicate with its clients. But the technology itself has been a differentiating factor in the healthcare industry, Hilton said.

“It reminds me a lot of the travel industry, frankly, where you have a few big players that control a lot of the information in the space,” he said.

The entire system relies on closed technology that limits access, he explained. If a company creates a more open platform, it “can really differentiate [itself] in this industry, because there is so much old technology, closed technology, there’s really a lot of opportunities.”

It remains to be seen if big technology players like Amazon can find that niche. The company has toyed with a number of ideas before putting them aside, including selling prescription drugs online and selling supplies to healthcare clinics through its Amazon Business branch.

But of all the technology players taking aim at the healthcare space, Amazon could be the most deeply invested. Just this year, the Seattle tech giant has announced an independent joint venture with JPMorgan Chase and Berkshire Hathaway; Acquired drug delivery company PillPack; and is reportedly developing internal healthcare clinics for its employees.

Even as the industry grapples with its new technological underpinnings, it continues to grow at a dizzying rate. Healthcare spending now makes up almost one-fifth of all spending in the U.S. And that is one reason Accolade has made progress.

“There’s so much money pouring into healthcare. When you look at VC and what I would call innovation capital, it’s $7 or $8 billion a year now,” Hilton said. “We have brand new categories of things that didn’t exist 10 or 15 years ago, things like telemedicine.”

But those new pieces of technology can also create more problems, Hilton said. It’s great to have an app to manage diabetes, but many people with diabetes don’t know if or how they’re able to use the technology.

“Employers are buying these things, but they still really struggle with getting people to use them,” Hilton said. However, he added, “If you do a really great job there, you’re going to make people smarter, more educated and navigate to the right choice the first time.”