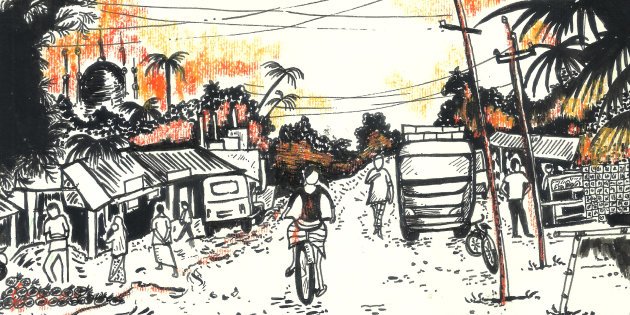 SONITPUR, Assam — The local councilor estimates that only 20% of the residents of the neighbouring Panibhoral and Suaguri Biswanath panchayats made it to the first draft list of the National Register of Citizens (NRC) that was released in January this year. In other districts in the state, up to 80% of the inhabitants are on the list

At a local tea shop, the men here wear the ubiquitous checked lungis, the women here cover their heads. They are Assam’s Muslim residents — the people often vilified as illegal Bangladeshis.

Their presence is, in a sense, why this elaborate exercise has been thought up:

The issue of “outsiders” has animated Assam’s politics and public opinion since the colonial era. In 1951, a National Register of Citizens, or NRC, was prepared on the basis of a state-wide census.

In August 1985, the Indian government and agitators (organised as the Assam Movement) signed the Assam Accord after 5 years of unrest; one of the central demands was the deletion of the names of illegal immigrants from electoral rolls.

The current exercise, billed as an updation of the 1951 NRC, makes a distinction between “genuine” citizens and “illegal immigrants”. This time, Assam’s residents must prove they, or their ancestors, were already living in the state on 24 March 1971 – a day before Bangladesh declared independence from Pakistan.

So what will this updation process bring? Who from these villages will be on the list, who will not?

There is defiant optimism in the teashops in Mathouri. A proper survey, an inclusive NRC, a fair hearing, will prove what the people milling around this bustling market have always said: We are Indians. We have our papers. We are not foreigners.

But most of all there is kheli-meli, confusion. There is kheli-meli about anomalies in voter lists and identification forms; names wrongly spelt 67 years ago in 1951 – or in their digitisation decades later; over surnames because fathers and children often use different last names; women who referred to themselves as ‘Khatun’ when they were unmarried, and became ‘Bibi’ after marriage.

A man who entered the rolls as Mofizul in 1951 became Mofizul Hoque and so was struck off the list; another man had two children with birth dates in the same year — arousing suspicion in the eyes of the verifying officer. (The answer to the riddle was that he had two wives, who delivered in the same year.)

All this kheli-meli ruins perfectly good papers, and casts a needle of suspicion over legacy data. All this confusion sometimes takes a ‘genuine’ citizen and puts her in the “pending verification” category.

A legacy of doubt

Proving one’s ancestry should be straight-forward:

The NRC website asks a person to prove their bond with their parents through “any legally acceptable document which establishes the relationship in clear terms.”

But life has not been easy for most of the poor in the rural and urban areas of Assam.

Documents have scattered in the vicissitudes of displacement through floods and political disturbances, ethnic clashes, communal riots, violence. In some cases, the documents were never provided at all — by an incompetent sarkari babu, an administration not known for its efficiency.

Earlier this year, the names of 48,456 women were removed from the January draft of the NRC because their documents did not stand scrutiny.

The popular conspiracy theory is that officials and politicians need the numbers, the July 30 list needs to show that a substantial number of applicants have been rejected to prove that the NRC has indeed been successful in rooting out these “foreigners” from the rolls.

But not to worry, the same theory follows, most of the rejected will be back in the final NRC roll in December since their documents are indeed valid. These are of course nothing but rumours — but in the absence of clear facts, a rumour can offer reassurance.

Someone has to go – why not the women?

All these problems of life and death, belonging and alienation, are what the commentariat call “procedural errors”, lapses, anomalies.

But how will these be rectified in time for the final list in December? What will the appeals process hold for women whose names were removed because their papers were not verified?

In place of answers, we have kheli-meli.

The Panchayat Verification document has its own troubled history: the courts once accepted it as valid proof of residence, now they don’t.

Women are also more vulnerable to being declared D voters, another issue linked to the NRC.

The Assam Police Border Organisation, created in the 1960s, is supposed to seek out illegal immigrants for deportation. They recommend names and the Foreigners Tribunal sends out notices to suspected foreigners who then have to prove their citizenship in a court of law. The onus of proving citizenship rests on the accused. These people are also marked as ‘D’ or ‘Doubtful voter’ in the electoral rolls or until their citizenship is established. Both these practices are specific to Assam.

This is another one of the ‘procedural anomalies’ of the NRC.

Conversations with people and news reports aver that there has been little coordination between these various departments of the Election Commission and the NRC, with many people who have been cleared of the suspicion of being D voters continue to be listed so in the electoral rolls

Who are these D voters? What are their stories?

Akhlima is one of those many women who woke up one day in 2016 to receive a notice from the Foreigner’s Tribunal. She was able to produce documents and win one case after the other, both making the same allegations. But Hoque shudders to think of what would have happened if there were spelling mistakes or cases of mistaken identity as it is known to happen.

What are simply ‘procedural errors’ to a few can often dictate one’s fate in a different set of circumstances.

The electoral rolls still list Akhlima as a D voter since it has not been updated to reflect cases won, and her name as well as those of her three children will be kept out of the NRC. Fighting two cases in three years has cost them a lot of money. As farmers who continue to lose their land to the Brahmaputra, Hoque’s fishing boat is keeping his finances afloat. But what if the NRC appeal needs more running around?

More than anything, he fears the mental agony.

The whole family almost landed up in the madhouse, the paagol khana, he says. Each time news came in of D voters being picked up to be taken to detention camps, they couldn’t eat or sleep in fear. The thought of being taken away from her three young children was so terrorizing, they feared Akhlima would commit suicide and someone had to be in the house with her all the time.

It is a pleasant afternoon, despite the otherwise oppressive heat of July in Assam.

Eventually, we walk out of the house unto the yard where behind a few trees the land gives away abruptly to the river, the water ceaselessly carving out bits of land for its own.