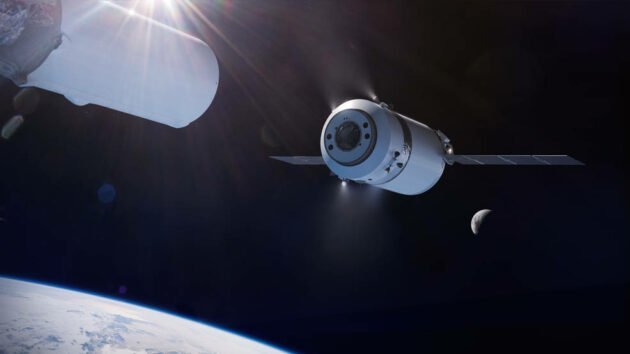 SpaceX’s robotic Dragon XL, a cylindrical, supersized version of its workhorse Dragon spacecraft, will handle shipments to the Gateway space platform as the first commercial provider to receive a Gateway Logistics Services contract from NASA.

NASA’s Artemis program calls for the first elements of the Gateway to go into lunar orbit in the early 2020s, leading up to a crewed moon landing by as early as 2024.

SpaceX’s Dragon XL cargo ships would be launched by the company’s Falcon Heavy rockets to deliver pressurized and unpressurized cargo, including science experiments and crew supplies. Each ship could carry more than 5 metric tons of cargo.

“This contract award is another critical piece of our plan to return to the moon sustainably,” NASA Administrator Jim Bridenstine said today in a news release. “The Gateway is the cornerstone of the long-term Artemis architecture, and this deep-space commercial cargo capability integrates yet another American industry partner into our plans for human exploration at the moon in preparation for a future mission to Mars.”

The Gateway Logistics Services program allows for multiple supply missions, with cargo ships spending six to 12 month hooked up to the Gateway for each mission.

NASA’s fixed-price contract is for indefinite delivery and indefinite quantity, but it guarantees two missions per provider, with a maximum total value of $7 billion across all contracts as additional missions are needed. NASA has as long as 12 years to order missions under the terms of the contract, with a 15-year performance period.

“Returning to the moon and supporting future space exploration requires affordable delivery of significant amounts of cargo,” said Gwynne Shotwell, SpaceX’s president and chief operating officer. “Through our partnership with NASA, SpaceX has been delivering scientific research and critical supplies to the International Space Station since 2012, and we are honored to continue the work beyond Earth’s orbit and carry Artemis cargo to Gateway.”

Cargo supply contracts are likely to be awarded to other providers as the Artemis program progresses.

The coronavirus outbreak has forced NASA to hold up on some of the preparations for Artemis — including work on  its heavy-lift Space Launch System rocket and Orion crew capsule at centers in Louisiana and Mississippi. But SpaceX is continuing its work on the Crew Dragon capsule in advance of its first crewed flight to the space station.

This week, SpaceX lost a spacecraft-like device when it was dropped from a helicopter, just before a planned test of the upgraded parachute system that’s destined for use on the Crew Dragon. The pilot jettisoned the device as a safety measure when it became unstable during an early stage of the flight, NASA reported.

SpaceX encountered a different sort of glitch last week, when one of the engines on its Falcon 9 rocket shut down prematurely during a Starlink satellite launch. NASA is participating in the investigation into that anomaly.

Despite those snags, NASA said it’s targeting mid- to late May for the first crewed Dragon mission.