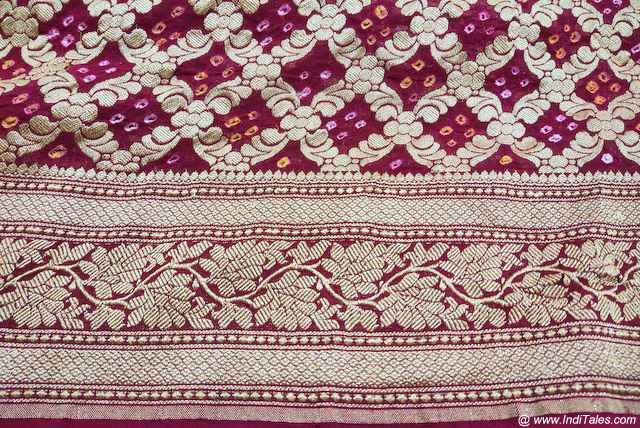 Zari is what makes the Silk Saris precious. The golden or silver embellishment adds weight and grandeur to the naturally shimmering fabric. In the good old days, it was manufactured using pure precious metals – gold for golden hues and silver for the whitish shades. So, the Saris even when they were worn out, still held the value of gold and silver in them. In places like Kanchipuram, you can still find shops buying back old Saris for the gold and silver they have.

With time, as the metals became costlier, pure Zari became unaffordable for most people. Innovations were done to maintain the look and feel of the gold and silver designs by using less precious metals. This included plating the copper wire with silver and then with gold, or wrapping a thin film-like layer of silver on a cotton thread. Imitation Zari of course exists and has its own market.

Let me take you to a real Zari workshop and show you how these fine hair-like threads of silver are created to weave into delicate silk fabric.

Sona-Rupa or Gold and Silver Zari

Traditionally, in the weaving language, Gold Zari is called Sona and Silver one Rupa. In fact, Rupa is the word for silver in many Indian languages. It is from this word that we get the word ‘Rupaiya’ for our currency. Zari comes from the Persian word ‘Zar’ and means gold. In India, it was traditionally called Kalabattu, though now this name is rarely used.

Silver remains the primary ingredient for both the silver as well as the golden Zari. Latter is in fact the silver thread that has been gold plated.

In the good old days, they used to put the silver Zari in warm turmeric water to allow it to absorb the natural yellow color.  After a while, it gave an impression of being golden. This ‘Haldi Zari’ though natural, was not stable. The color would fade off after a while.

Slowly the electroplating techniques, developed during the middle of the last century, made their way to the lanes of traditional silk clusters like Varanasi. Today it is a default technique to make gold Zari. Due to high gold prices, the usage of this color in pure has gone down drastically. As of now, the gold Zari is created using the lacquering technique that uses chemicals to give the effect of gold. It looks like gold but it is not really gold. Chemicals are also used to bring in different shades of gold – from shining bright to a dull matte finish.

The purest form of Zari has only silver and it obviously costs accordingly.

The second type has a copper wire with a thin layer of silver on it. So, what you see and what your skin feels is silver, but what is inside is not really silver.

The third type is a cotton thread with a layer of silver foil (called Baadla) on it.

Finally, there is imitation Zari that is made using chemicals, resins, or plastic.

The cost differential between the pure Zari and the rest of the variants is roughly a multiple of 10-12. The cost of real Zari is obviously directly proportional to the cost of pure metal.

Read More – Silk Saris at the Intersection of Art, Architecture and Heritage

How much Zari is used in a Sari?

A Silk Sari can consume anywhere from a few grams to more than a kilogram of Zari. For the heavy Jaal saris that are full of silver or golden patterns, as much as 1200 gm of zari can be used. No wonder the traditional name for these Zari Saris was ‘Bhari Saris’ or Heavy Saris.

Pure Zari is mostly used for handloom Saris. The power looms tend to use the Phekhua technique that ends up wasting a lot of weft material. So, pure Zari is generally not used on power looms.

With the advent of cheap plastic imitation varieties, the number of Zari makers in clusters like Varanasi has drastically gone down. As of now, there are just a handful of Zari Makers in silk clusters like Kashi and Kanchipuram. Imitation Zari is mostly supplied from Surat.

Due to the huge cost differential, the pure and imitation variants will continue to co-exist. Not everyone can afford the real Zari, at least not all the time. At the same time, there are connoisseurs who will continue to patronize it creating a demand.

If we look at the Zari-making process, it all begins with the solid block of pure silver that the manufacturers procure from the metal market. It is put through various processes to reduce to about 0.3mm in thickness. The process is simple but involves many steps.

In the first step, the solid block of silver, locally called ‘Chandi ki Batia’ is melted and converted into long rods, rectangular in shape. A bit of copper is added at this stage as silver by nature is malleable. This long silver rod is further stretched and passed through fire kilns repeatedly till it reaches about 30mm of thickness. At this stage, it is called ‘Paasa’. As the thickness decreases, it can be rolled into hanks called ‘Guchhali’, just like the hanks of raw yarn or wool.

Paasa goes through as many as 20 levels of stretching, by repeatedly passing it through the small holes in a round metal dye of decreasing thickness. This dye is called ‘Baara’ and is marked with a number indicating its thickness. At every step, the thickness of the silver thread keeps reducing till it reaches the desired level where it compares with the width of silk threads or human hair. Now it is ready to be woven like silk to create the patterns we love to flaunt on our Saris.  ‘Tarkashi’ is the name given to this thread when it resembles a very fine wire.

The final fine wire is then flattened and is called ‘Baadla’. It is wrapped on a base material that can be either cotton thread or copper wire. It is also be used directly for embellishments or embroidery. Silver does go through a few chemical treatments before it can be used as Zari.

I saw the 32mm silver wire being passed through different dyes and the final fine Zari of 0.3mm thickness. The whole process looks simple and is more or less completely mechanized now. It can be performed with basic human supervision.

Vimlesh Maurya Ji, whose workshop I visited in Varanasi, explained that in the good old days all the work had to be done manually. Artisans used to beat the metal by hand and then cut it into fine strips to make Zari. Slowly mechanization happened but the machines still had to be operated by hand. Now, of course, most of them operate on electricity.

Zari making remains a cottage industry run by families who have traditionally been in this business. A multi-storeyed haveli serves as home, office as well as a workshop for the manufacturers. In the weavers’ quarters, you can hear the sound of looms, but Zari makers remain in the background. It is only their product that proudly takes the Centerstage on a Sari.

Their supply chain works like clockwork, as it is primarily a B2B (business to business) enterprise. Varanasi being a silk weaving cluster, that too where the focus on Zari weaving is high, is a natural hub for Zari makers. In the past, they have also supplied to the other silk clusters in India like Kanchipuram and Dharmavaram. It tells us how well the trade routes were established across India, and how well connected the business communities were.

To test the purity of Zari, the best way is to take a small thread and burn it. If the residue is whitish ash, then the Zari is pure, else not. Imitation Zari will leave a black residue. If it is in plastic, then it will burn like plastic with flame running backward.

Another test is to take a thread and rub it on a stone. The color of the luster on the stone will tell you the base metal, reddish hue will indicate copper and whitish silver. Imitation one will leave nothing.

Culturally in India, Gold and silver are also associated with purity. So, putting them on your garments adds a layer of purity to them too, especially when they have to be a part of important Sanskaras or milestones in your life. Looking at these shimmering silks embellished with pure silver, who would not envy our luxury quotient!

When buying the pure Silk Sari, if the Kalabattu and silk are authentic, do not hesitate to pay the price. It is worth investing in.

Zari or Kalabattu making and weaving is a living heritage of India, let us keep it that way!

This post has been written in association with the Silk Mark Organization of India.