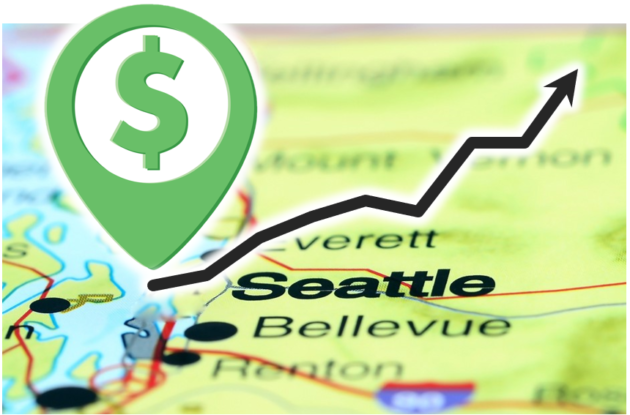 There’s something about Seattle tech startups and entrepreneurs that gets Rajeev Batra excited. His Silicon Valley investment firm, Mayfield, has backed fast-growing companies from the region including Outreach, Skilljar, and HashiCorp in recent years. But he’s a bit wary of talking about it.

“I’m contributing to letting the cat out of the bag,” Batra said, half-jokingly, during an interview with GeekWire. “As an investor, I don’t want too many others to know the secrets.”

Batra isn’t the only out-of-town tech investor who sees big opportunity in the Seattle region.

The number of Seattle-area startup deals involving Silicon Valley investors has more than doubled in the past decade, according to data from Dow Jones VentureSource. Silicon Valley firms participated in 69 investments for Seattle-area startups in 2017, up from 28 deals in 2009, and 39 percent of total venture deals in the Seattle region last year. The number has risen almost every year over that time frame and is expected to reach a new record in 2018.

“Seattle has always been a good market, but now will get increased attention,” said Ted Wang, investing partner at Cowboy Ventures, backer of Seattle startups including Textio, Fullcast and LumaTax.

Mayfield’s Batra said there’s “something in the water.”

“I don’t believe this is a flash in the pan situation,” he added. “This is much more of a long-term trend.”

Many out-of-town investors are attracted to Seattle’s deep talent pool and enterprise tech expertise, powered by homegrown giants such as Amazon and Microsoft, in addition to engineering centers of Facebook, Google, Apple, Uber, and many others. There’s also sufficient deal flow available  — the Seattle tech ecosystem has been criticized for lack of local startup capital for years, particularly given the unprecedented wealth created by a recent massive tech boom.

“I’ve seen a dearth of venture capital firms that are active in the area,” said Karan Mehandru, general partner at Trinity Ventures, a Bay Area firm that has made six Seattle-area investments over the past two years in startups such as Auth0, New Engen, and Bulletproof Coffee.

Since 2008, Seattle area venture capital firms like Madrona Venture Group, Ignition and Maveron have raised $6.1 billion, according to data from PitchBook. That’s not anywhere close to the $169 billion raised by Bay Area firms.

A few new firms have emerged in Seattle in recent years, including Flying Fish Venture Partners and Pioneer Square Labs. But their new funds represent a drop in the bucket compared to Silicon Valley.

The biggest player in Seattle, Madrona, raised $300 million for its seventh fund earlier this year. An early backer of Seattle area companies including Smartsheet, Impinj, Redfin, and Apptio — all of which have gone public in recent years — Madrona invested in five Seattle-area deals in the second quarter of this year. That was the most of any firm, followed by Pioneer Square Labs (4) and Maveron (3). The next seven firms on that list, though, came from the Bay Area, New York City, and Chicago.

Matt McIlwain, managing director at Madrona, said he welcomes the out-of-town investor interest despite the added competition for deals.

“Entrepreneurs having compelling investor options to consider when picking partners to work with to build a great company is a good thing,” he added.

David Rosenthal spent four years at Madrona as a principal investor before moving to San Francisco last year to launch Wave Capital, a new VC firm focusing on early-stage marketplace startups that is keeping a close eye on Seattle.

Rosenthal admitted that he lost “several deals” to Valley firms while at Madrona. But he said increased involvement from the Bay Area will ultimately have a positive effect on Madrona’s other early-stage investments in Seattle.

“Madrona is going to lose more deals now — it’s happening every day,” he explained. “… When it happens, it sucks. But you come back the next day and those firms can lead [future investment rounds] in one of your portfolio companies. That’s how the ecosystem keeps building on itself.”

Valley firms are not only investing more in Seattle, but they are now taking consistent 2-hour flights up north. It’s a welcome sight for local entrepreneurs who were previously forced to make frequent trips to the Bay Area, wasting valuable time and energy.

“In the past, you’d have to go to Sand Hill Road, kiss many rings, bring your dog and pony, and do the show,” Medina said. “I was pretty surprised that for our Series D round, we had [investors] come to us in our room.”

Jeff Jordan, general partner at Andreessen Horowitz, said Seattle is the most robust market outside of Silicon Valley.

For entrepreneurs, getting to pick from a variety of funding sources can improve their term sheets. Jordan, whose firm invested in companies such as Usermind, Julep, Distelli, and Accolade, said that deals in Seattle are “very competitive with lots of investors.”

Startup valuations in Seattle have historically been lower compared to the Bay Area and data from PitchBook shows that is still the case. In 2017, median pre-valuation for Bay Area startups was $32 million and just $15 million for Seattle companies.

But Medina said the “Seattle discount,” or Valley investors giving Seattle startups a lower valuation simply because of their location, no longer exists. And Megan Quinn, general partner at Spark Capital, which led a $65 million round for both Outreach and pet-sitting company Rover this year, said the same.

“From a public market multiple basis, they were both definitely on par with what we’re seeing in Silicon Valley,” she said of Outreach and Rover.

While Silicon Valley cash is helping fund Series A rounds and beyond, it may not do much for Seattle entrepreneurs who just have an idea and need funding to get off the ground.

“When I was raising my seed round in 2015, I could barely even get meetings in Silicon Valley, even with Seattle’s top angels making introductions,” said Sandi Lin, CEO of Skilljar, a learning management startup that had two Valley firms lead its $16.4 million Series A round.

The lack of seed-stage capital can cause founders to leave town and build billion-dollar businesses elsewhere. That’s what happened to Box CEO Aaron Levie, who grew up in Seattle but couldn’t find early financial support for his cloud storage startup and relocated to San Francisco. Box is now a publicly-traded juggernaut worth more than $3 billion.

Nick Huzar could have followed a similar path; he has several friends who did so. But the OfferUp co-founder was committed to building his used good marketplace company in the Seattle region — so much so that he took 15 flights in one year to raise money from Bay Area investors.

OfferUp is now one of Seattle’s only unicorns, or privately-backed startups worth more than $1 billion. Most of its $261 million in funding comes from the Bay Area and New York City.

That may be because a lack of capital. But it could also be the mindset of entrepreneurs.

Some Valley investors laud Seattle founders for being “mission-driven” and having a level of “candor and humility.” But local investors say that might be a problem.

“Seattle entrepreneurs show really well on the execution front and doing what they say they’re going to do,” said Bill Bryant, a partner at DFJ based in Seattle. “But where they suffer is in that ambition and vision and aspirational sense of building great companies.”

Organizations including Pioneer Square Labs, Flying Fish, and Madrona Venture Labs follow a thesis that Seattle is full of would-be entrepreneurs that are locked up at big tech companies, unwilling to leave their six-figure salaries and make the startup leap. They want to cultivating more founders in Seattle and provide early capital.

Greg Gottesman is the former longtime managing director at Madrona who left in 2015 to create PSL, another “startup studio.” PSL also launched its own $80 million venture fund earlier this year to invest in early-stage tech companies.

Gottesman said he’s happy to have Silicon Valley investors in town, given that PSL actively tries to partner with them on deals. He isn’t worried about the added competition given that “different firms have interest in different kinds of companies.”

“Sometimes an ideal syndicate is to have a local firm and a firm from outside that can bring a different set of relationships that can be really valuable,” he added.

But Bryant said it’s important for local investors to continue funding early-stage deals in their backyard. He pointed out that “success breeds success.”

“When local people make money, hopefully there’s a recycling effect and some money goes back — if not in tech, back into culture, philanthropy, or non-profits,” Bryant said.

Rand Fishkin, the Moz co-founder who avoided taking VC money for his new Seattle startup SparkToro, said he hopes that the city’s funding gap is not solved by Silicon Valley VC firms alone.

“I hope Seattle stays under-invested-in, at least by institutional sources of money,” he said in a message. “Between movements like Zebras > Unicorns, crowdfunding, revenue loans, alternative accelerators, and creative types of fundraising (like SparkToro’s), I think the Pacific Northwest can be a leader in forging our own, more profitable, less high-risk path. We can build a lot of tortoises that eventually beat out hares here.”

GeekWire Podcast: Coronavirus hits tech economy; life under lockdown; and a poem for our new era

OneWeb files for bankruptcy amid COVID-19 chaos, leaving fate of its broadband satellites up in the air