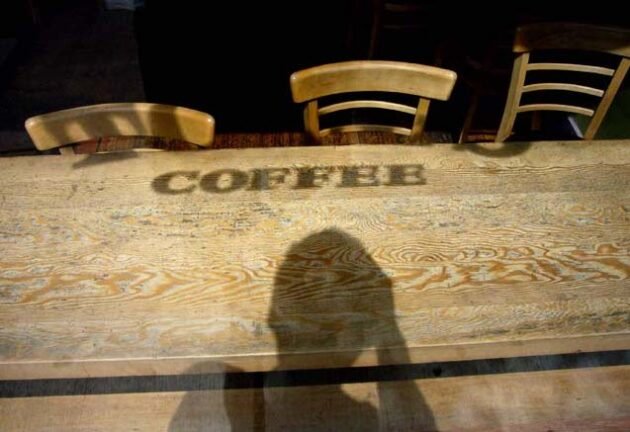 For a lot of workers of varying stripes, coffee is an essential part of what it means to go to work, especially in Seattle. Whether it’s the morning cup for the commute or the ritual of congregating near the pot at the office or the visit to a favorite shop, coffee fuels daily life.

The escalating coronavirus crisis has disrupted a wide range of routines over the past couple weeks, and companies that deal with coffee are right in the mix.

That includes Starbucks, the coffee giant that built its business around the idea of a “third place” separate from home and work and has been innovating for years on ways to use tech to stay at the top. The company announced it is shifting entirely to a drive-thru model at its stores in the U.S. and Canada.

Much smaller startups in Starbucks’ backyard are using coffee tech and dealing with the crisis in their own ways.

Nick Martin, CEO of Seattle-based Joe Coffee, said his startup has been “absolutely swamped” for a week. The company runs a mobile order and rewards app for local and independent coffee retailers to help them compete with big chains.

“We have become a lifeline for hundreds of coffee shops,” Martin said, noting that mobile orders have about tripled since Friday of last week and have grown more than 25 percent day over day since Washington Gov. Jay Inslee announced that restaurants and bars were closing on March 16.

Joe Coffee has also more than doubled the number of shops registered on its network and is working around the clock to onboard shops as fast as possible, waiving commissions through May and deferring all set-up fees until the dust settles — many businesses are depending on it, Martin said.

“We are trying to do anything we can to help shops provide a social-distance appropriate way of keeping their doors open,” Martin said. “It’s tough circumstances indeed, but thankfully we have technology that is truly making a positive impact when these small businesses need it most.”

As Joe Coffee caters to those who still had the ability to pick up a coffee at a nearby shop, other startups were dealing with a rise in business around those who were doing their coffee consumption at home.

Bottomless, which combines original hardware, an online marketplace, machine learning and more to determine when customers need a shipment of fresh coffee beans, has seen orders increase as much as 37 percent.

“This increase is almost all generated from our current customers just drinking coffee faster,” said Bottomless co-founder Michael Mayer, noting that there has also been an uptick in monthly organic growth and referrals.

Bottomless makes a rechargeable scale on which users set a bag of fresh beans that they’re using to make their daily coffee. The scale is connected to WiFi (and to Bottomless) and as the bag becomes lighter, it triggers the order for more beans.

“One interesting development is that we’ve had more customers than normal reach out asking for Bottomless for other stuff in their house,” Mayer said.

RELATED: Tech ideas are brewing that these 5 coffee-crazed Seattle startups — right in Starbuck’s back yard

The company has grown its headcount to six.

Bean Box CEO Matthew Berk said Friday that they, too, have seen an uptick in orders as people work from home. The company works with more than 35 Berk top-rated small-batch roasters to make their product accessible to more people.

“The increased demand is coming not solely from individuals, but from many companies who want to support and stay connected with their teams, clients, and partners while offices are closed and events cancelled,” Berk said.

Berk said coffee roasters are being hit very hard during the health crisis, especially with cafes that are ever more difficult to operate during social distancing. Bean Box aims to continue to support its partners and credits investments in automated packaging for allowing it to keep going with a core team while prioritizing health and safety.

“Our focus as a company right now is simple: to support our community of coffee lovers not just by helping them stay productive at home, but by buoying morale as we all navigate what’s ahead,” Berk said. “Great coffee will do that!”