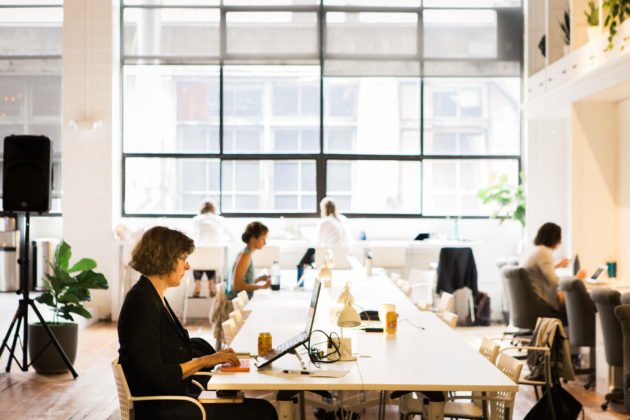 With reduced revenue and uncertainty caused by the COVID-19 outbreak, Seattle tech startups are temporarily letting go of workers to help keep their businesses afloat during an unprecedented economic period.

Co-working startup The Riveter and clothing rental service Armoire are using a Washington state policy that lets companies put employees on a temporary layoff, or “standby,” which allows workers to collect unemployment benefits with the expectation to return to work within eight weeks. The state this month included part-time workers under the policy as a part of new emergency rules.

Social distancing mandates are forcing businesses to shut down and heavily reduce staff across Washington, the initial epicenter of the U.S. COVID-19 outbreak. The state’s labor department is facing a rush of unemployment insurance claims which more than doubled over the past week, The Seattle Times reported Friday.

The Riveter put 24 employees, or 34 percent of its staff, on standby this week.

“These are people who built the company with us,” said The Riveter CEO Amy Nelson. “This is heartbreaking.”

This week The Riveter reduced hours and staff across its nine U.S. locations, limiting access to members and canceling all live events.

Nelson is withholding her salary and other employees are taking at least a 10 percent pay cut. The company is still covering health insurance for workers on standby.

The Riveter makes about half its revenue on co-working office space fees and hopes to drive more activity to its new online community.

“We have a strong business,” Nelson said. “We fully expect to bring back everyone once this passes.”

Founded in 2017, The Riveter raised a $15 million Series A investment round in December 2018. The company had a small round of layoffs in January.

Co-working giant WeWork continues to remain open during the outbreak and told employees this week that it has plenty of access to capital.

Armoire is also facing headwinds due to the outbreak. The 3-year-old startup runs a monthly clothing subscription service for women. On Thursday it changed the roles of 23 employees, or a third of its staff. It cut some positions completely; moved others to “standby”; and is using the state’s SharedWork Program to retain some employees at reduced hours. Armoire also temporarily closed its retail location in Kirkland, Wash.

The CEO reduced her salary to $1 and her leadership team took voluntary pay cuts.

The company also this week implemented a robust protocol at its clothing warehouse, with hourly cleaning regimes and distancing rules between workers. It is offering unlimited paid sick leave to those who are feeling unwell.

Armoire’s business had been growing quickly. But now the company is seeing members put subscriptions on hold. New customer acquisitions are quickly slowing. Many Armoire customers work in the hospitality and travel industries; both have been decimated by the social distancing mandates and closures.

“We are trying to get a control of our expenses and make sure the cash we have is going to last as long as possible,” Singh said.

The company is trying to quickly adapt. It is offering resources to its core customer, the working mom, sending information about meal-kits or in-home education. The startup is encouraging members to buy gift cards and swag.

Armoire is also noticing customers in private Facebook groups sharing how they are getting dressed at home. Some are using Armoire clothes for play dates with their children at home, or adjusting personal Armoire style profiles to “comfy & casual.”

“There is a good amount of energy around the fact that getting dressed is still an important part of a Bosslady’s day,” Singh said. “We are cautiously optimistic about the trend.”

As a leader, Singh is trying to stay optimistic with her team but also being transparent about this new reality. She knows that “great companies are built in difficult times.”

“We have a super smart creative team and I think we’ll be able to find a way to generate revenue in this new world,” she said. “I just don’t know how those buckets will play out.”

Armoire has raised $5.1 million from several high-profile investors. The company follows a similar playbook to Rent the Runway, the 10-year-old New York City-based company valued at more than $1 billion. Rent The Runway closed its stores this week. Yahoo reported Friday about difficulties the company is facing amid the outbreak, noting potential concerns about sharing rented clothing during the COVID-19 outbreak.

So many people must be canceling their Rent the Runway subscriptions .