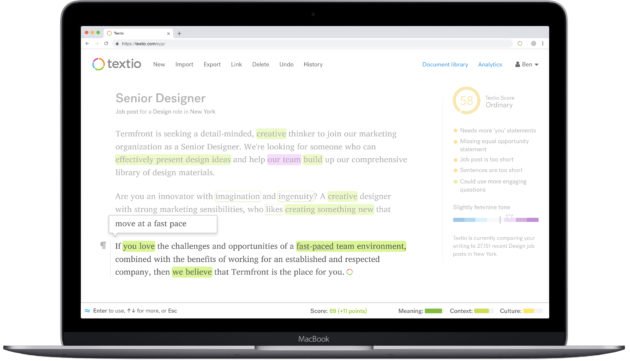 Textio is raising more cash for its platform that helps customers improve how they write.

A new SEC filing reveals a $7 million cash infusion for the 6-year-old Seattle startup. The company declined to confirm the funding amount or investors when reached by GeekWire, but CEO Kieran Snyder provided this statement:

“As writing becomes a more critical mode of communication in these times of remote work, it’s clear to both companies and investors that Textio’s connected language platform can help,” she said. “Right now, we are all doing more work in writing that ever before, and the environment is stretching not only HR professionals, but their partners in comms and brand as well.”

That signals Textio’s ambitions to expand beyond helping companies write better job listings and candidate emails, which has been its core offering thus far. Textio’s technology suggests words that are more likely to attract job applicants and improve the diversity of those candidates. Customers include Johnson & Johnson; Slack; NASA; and more.

Snyder recently spoke to Wired about the company’s software and its expansion plans. Asked if Textio will launch a consumer product, Snyder said “perhaps.” More from the Wired interview:

“Right now, there are so many areas in businesses that have really high impact to businesses. We started with hiring because every business really is impacted primarily by who chooses to work there. That’s the thing that makes or breaks the business. But if you think about all the places you’re writing at work, whether you are making software as we do at our company or you’re making T-shirts, the thing you’re actually probably making the most of every day is words.

And the opportunity in a business that’s really interesting is, companies do have voice and culture that emerge in the language that they use. So for Uber to use “whatever it takes” so often is not something that’s just a fact about their hiring language. It’s a fact about their language in general. So I wouldn’t rule out something that is consumer oriented. But the cultural patterns, when you look at large organizations, are very interesting from a language perspective. So we’re really highly focused there right now. “

Snyder and co-founder Jensen Harris launched Textio in 2014 after working on productivity tools at Microsoft. The company raised a $20 million Series B investment round in 2017.

Textio was among the startups featured in a GeekWire story this week about how Seattle companies are adjusting to remote work amid the COVID-19 outbreak.