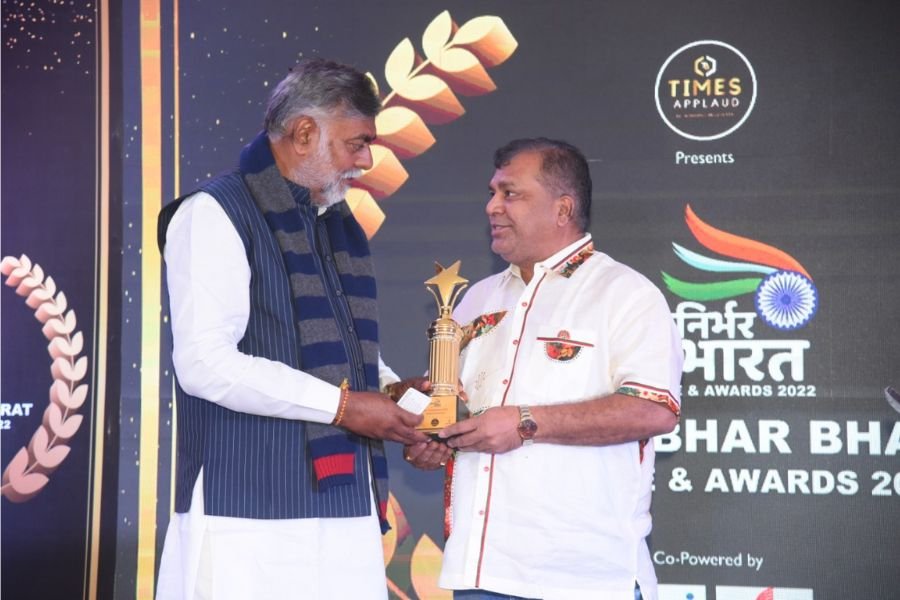 December 06: If you want to serve the One Almighty God and spread happiness in the world, you should live for others rather than just for yourself. Ramkumar Pal, a BJP leader from Mumbai, firmly believes this.

Best described as a man of many facets, talents, and personas, Mr. Pal, is Rashtriya Karyakari Adhyaksh, Pradhan mantra Aatma nirbhar Bharat Abhiyan Sangathan, and Bharatiya Janata Party Rashtriya Karyakarini Sadasya, Kisan Morcha. His selfless social services have been a substantial part of his life on both personal and professional levels.

In a moment of great pride for the BJP, Ramkumar Pal has been honoured with the Atma-Nirbhar Bharat Conclave & Awards 2022. Shri Prahlad Singh Patel, Central Minister of State for Food Processing Industries of India, was the Chief Guest at the special event, which was held at the Park Hotel, New Delhi, on November 26, 2022. The award was organized by India’s notable digital marketing and PR agency, Times Applaud.

Besides being a BJP leader, Mr. Pal is a successful businessman whose heart beats for the poor. At present, he serves as BJP’s Vice Chairman for North/West Constituency, Mumbai. Previously, he held posts of Special Executive Officer (SEO), appointed by the Government of Maharashtra (2005-2010); President of Slum Cell, North/West Constituency – Mumbai, BJP (2011-2014); and Member of Rashtriya Patrakar Sangh. As a National Executive Member of BJP Kisan Morcha and in In-charge of Daman-Diu and Dadra Nagar Haveli, Mr. Pal drew the attention of Prime Minister Narendra Modi to the various problems faced by farmers.

Mr. Pal has earned the trust and appreciation of the BJP’s top leadership on numerous occasions. However, rather than joining the party for electoral benefit, he intends to serve the BJP as a hardworking leader.

Mr. Pal is the Pradhan mantri Aatmnirbhar Bharat Abhiyan Sangathan’s Rashtriya Karyakari Adhyaksh. He is also a member of the B J P Kishan Morcha Rashtria Karyakarni. The group seeks to improve the lives of Indian farmers.

Mr Pal expresses his heartfelt appreciation to the Modi administration for emphasizing sanitation, environmental awareness, and public health. According to him, government measures like the Swaccha Bharat Abhiyan would undoubtedly improve India’s image on a worldwide scale while also making citizens more conscious and responsible about cleanliness.

As a dedicated social worker, he looks for ways to help people in distress. As the Chairman and Trustee of ‘Om Krishna Ganesha’, a charitable trust, Mr. Pal and his team have been working since 2009 in the suburbs of Mumbai, funding medical treatments for needy and weaker sections of society. As the Chairman and Trustee of ‘Amar Madhav Charitable Trust’, Mr. Pal has been working in the field of rural development, donating clothes and school stationeries such as books, bags, and dresses in villages of Palghar district, Maharashtra. Similarly, the charismatic leader is the Trustee of ‘Jeevan’, a charitable trust; Managing Committee Member of ‘Shree Papudiya Math’, Puri, Odisha; Member of ‘Shree Jagannath Cultural Trust’, Odisha; Member of ‘Dharmshila Khadi Gramodyog Sanstha’; Board Trustee of ‘Maa Tulja Bhavani Khadi Seva Sanstha’, which donates more than 10,000 school books to government-aided schools in slum areas of Mumbai every year and organizes medical camps and cataract operations in slum areas of Mumbai from time to time.

Mr. Pal has also made an effort to recognize others’ contributions to social welfare. He hosted India’s Great Leaders Festival as Chairman of the National Human Welfare Council, Maharashtra. He assisted Nehru Yuva Kendra, Mumbai, under the auspices of the Home Ministry, in organizing sports and cultural events for children from Naxal-affected states, allowing them to grow and enhance their society.

Atmanirbhar Bharat, or the Self-reliant India campaign, is the vision of Honorable Prime Minister Shri Narendra Modi for a new India. The Atmanirbhar Bharat Conclave & Awards 2022 Award is an effort of Times Applaud to honour and recognize the Atmanirbhar Bharat campaign that aims to make the country and its citizens self-dependent. The event was held to honour the exceptional individuals or companies who are contributing to the development of the nation and working to make India more prosperous. Hence, Ramkumar Pal rightly deserves the award for doing all that he can to uplift the underprivileged and needy.

Mr. Pal has earlier too been recognized for his contributions in various fields. Earlier this year, India’s leading media house, Mid-Day, honoured Mr. Pal for his selfless service to humanity as a social worker. Mid-Day featured Mr. Pal in a coffee table book called Mid-Day Success Stories 2022. Among the many awards that he has received, Mr. Pal was bestowed with Samaj Seva Ratna by Veer Bharatiya Hindi Sahitya Peeth, Lucknow, for his notable contribution to the field of social work, his national and international stature, and years of service to popularising the Hindi language and Saraswat Sadhana.

Mr. Pal continues to be a humble and dedicated social worker in spite of all his achievements. We wish him the best in all his future endeavours.

If you have any objection to this press release content, kindly contact pr.error.rectification[at]gmail.com to notify us. We will respond and rectify the situation in the next 24 hours