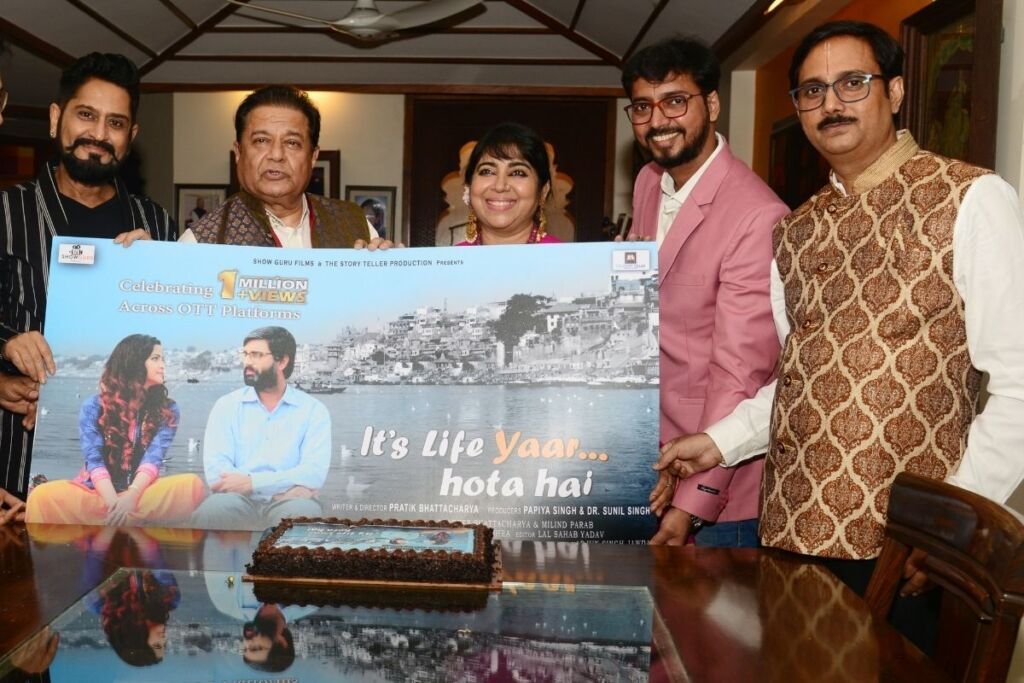 Mumbai, December 31: A Hindi feature film by Pratik Bhattacharya and EP&DOP Shiv Mishra It’s life yaar, Hota hai.. has been released on MX player and other OTT platform is being well-liked. The film has got more than 1 million views. The makers celebrated this milestone with cake cutting by Padma Shri awarded Bhajan Samraat Anup Jalota. Padma Shri singer Soma Ghosh was also present on the occasion who sang a thumri in the film.

Another good news for this film and the entire team is that Pratik Bhattacharya got Best Director and Vishnu Mishra for Best Music Director Award for Song Banarasia at the Global Taj International Film Festival 2021 held in Agra. Suraj Tiwari, Founder and Festival Director, Global Taj International Film Festival, announced Prateek Bhattacharya’s name in the Best Director category during the closing ceremony of the film saying that It’s Life Yaar Hota Hai film proves that if the film has a story and great coordination of screenplay, dialogues, skillful acting and direction, then the film would not require any big star cast and big production house. By watching this feature film, new film directors and talented actors will be encouraged to make good films.

After cutting the cake of One Million Views, Anup Jalota congratulated Pratik Bhattacharya and Shiv Mishra for making the best film and said that I am the biggest fan of Soma Ghosh Ji. I get mesmerised by listening to her songs. Last week she came to listen to me in Banaras. Even the child knows her because Ustad Bismillah Khan Saheb had adopted her as his daughter. She has been awarded the Padma Shri.

Soma Ghosh said that Anup Ji always does a noble job of promoting and encouraging new talents. As the name of the film, it is about cinema life, no matter what trouble comes, never get discouraged and disheartened. Always overcome every trouble and move ahead.

Produced under the banner of The Story-Teller Productions and Show Guru Films, the story, screenplay, dialogues and lyrics of this film are written by Pratik Bhattacharya, who has also directed the film. Pratik Bhattacharya, who has been working as a story, song, screenplay and dialogue writer for the past 17 years in the film industry, marks his debut as a director with this film.

Pratik Bhattacharya said that in life, sometimes we get very frustrated and disappointed. The latest example of this situation we had witnessed during the coronavirus outbreak and the lockdown. Still, some hope arises in such a way that the spirit of living is alive in us. The film revolves around the same one-liner. 80 per cent of its shooting has been done in Varanasi, while 20 per cent has been done in Mumbai. This film actually inspires to live life with vivacity on the strength of positive thinking.

The film’s executive producer and director of photography Shiv Mishra told that most of the actors in this film are new, and we have selected artists by traveling all over the country. Artists from many cities, including Delhi, Jabalpur, Varanasi, and Mumbai, have been cast in this. I think there is no dearth of talent even in small towns; they are just looking for an opportunity.

The songs of the film are also its highlight. There is a thumri in the voice of Padmashri Dr. Soma Ghosh in the film. Music composer Vishnu Mishra has composed this wonderful song, which is written by Prateek Bhattacharya.

Another sufiana song Man Bairagi by Saregama fame singer Raja Hassan and Raktima Mukherjee, sung in their melodious voice which is composed by very talented music director Tamashru Chandra. Both the songs of the film have become popular after being released on about 550 other platforms, including Spotify, Jio Saavn, Gaana.com, Winks Music, Hungama, MX Player, etc.

The producers of the film are Dr. Sunil Singh and Mrs. Papia Singh. Dr. Sunil Kumar Singh is a well-known psychiatrist and is also the founder of Buddha Mental Care Hospital in Varanasi. Due to his interest in films and literature, Dr. Sunil Kumar Singh has entered the industry as a film producer to give good films to the society, in which his wife, Mrs. Papia Singh, is giving him full support, who is also a classical Kathak Dancer and a social worker.

The film’s EP and cinematographer Shiv Mishra says that the film depicts the landscapes of Banaras, and most of the film has been shot in the picturesque Ghats and locations of Varanasi. Along with this, talented artists of Varanasi have also been given the full opportunity to show their talent in this film.