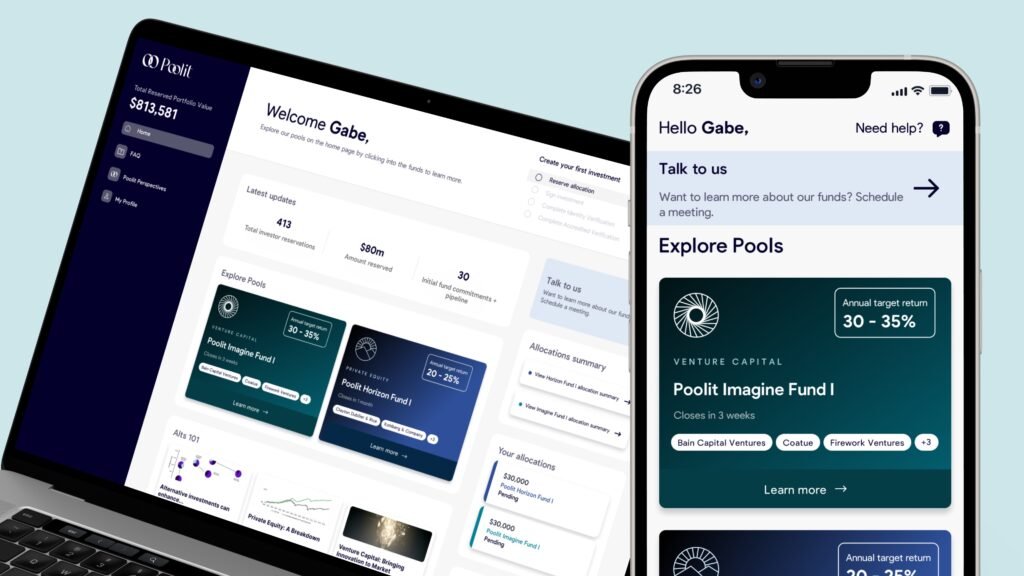 Dakotah Rice spent years working in the investment banking industry at firms such as Goldman Sachs, Carlyle and Coatue.

One thing that stood out to him was how only a small group of select people and firms could invest in venture capital and private equity funds. The barrier of entry is high, as minimums to invest in private equity often start at $1 million. While attending Harvard Business School, Rice became determined to build a platform that provides accredited investors with access to invest in such entities with as little as $1 — essentially giving them a way to be LPs without meeting the strict requirements that have historically existed.

In building out his business plan in late 2021, Rice talked to players in the space and got feedback that such a product would be welcomed by the industry — so much so that several high-profile investors agreed to back him in his efforts. Earlier this year, Rice raised $5.3 million in seed funding for Poolit, a Miami-based fintech startup that aims to open up access to investing in private equity and VC funds.

Encouraged by the validation and spurred by the belief that alternative investments should be part of any healthy investment portfolio, Rice in April dropped out of Harvard to work full time on the project. And today, Poolit is emerging from stealth and out of beta.

Currently, Poolit offers accredited investors the ability to put money in two funds. The Imagine fund is all venture capital firms. The Horizon fund is all private equity firms. Bain Capital Ventures, Coatue, CD&R and Apax are among the firms that investors can put money into through the platform.

“This is the first time someone can be an LP in those firms for no minimum amount,” Rice told TechCrunch in an interview. “There has not been a single fund that we’ve talked to that has had any reservations about being on the Poolit platform.”

That might be because Poolit offers the firms on its platform a free way to get investors as well as a diversified channel for distribution. Many of these firms go to private banks to get funding via “an old-school model” of paying a marketing fee to get backers in their funds, Rice said.

“2023 will be a fantastic year in all likelihood for venture and private equity. It’s kind of like you’re starting from a new base,” he added. “So these larger institutions who have had this exposure that goes up and down now have some other channel that they can also bring assets in and take advantage of the environment that we live in today. I do think there’s something unique about this timing.”

To ensure that the startup is adhering to federal regulations, Poolit partners with a firm called Maketa, which has $2 trillion in assets under advisory, to conduct its due diligence and vetting the quality and efficacy of investments themselves. The company spends 2-3 months alongside its sub-advisor rigorously vetting managers for inclusion in its funds before compiling the various funds into a portfolio.

In Rice’s view, Poolit’s registered funds structure is especially critical in today’s environment. Registered funds have strict disclosure requirements from the U.S. Securities and Exchange Commission, which are designed to protect investors more than non-registered funds.

KPMG audits Poolit, and each fund created on the platform essentially operates as their own company. So if Poolit ever ceases to exist, the funds will continue to exist.

“And if anything happened to Poolit, those people would be able to select a new advisor,” Rice added. “There are just all of these protections that exist out there for the underlying investors.”

Registered funds also have majority independent boards. Poolit’s includes a retired PWC audit partner and a JPMorgan executive that are meant to represent the voices of underlying investors and approve fees from third parties (even Poolit).

“In the wake of something like an FTX, I think this is really, really, really important,” Rice said. “They have the external third-party custodians, third-party fund administrators and it’s all codified on the SEC Edgar database website.”

As of December 9, the Poolit platform became available to the public. It currently has more than 500 users and about $140 million of reservations. 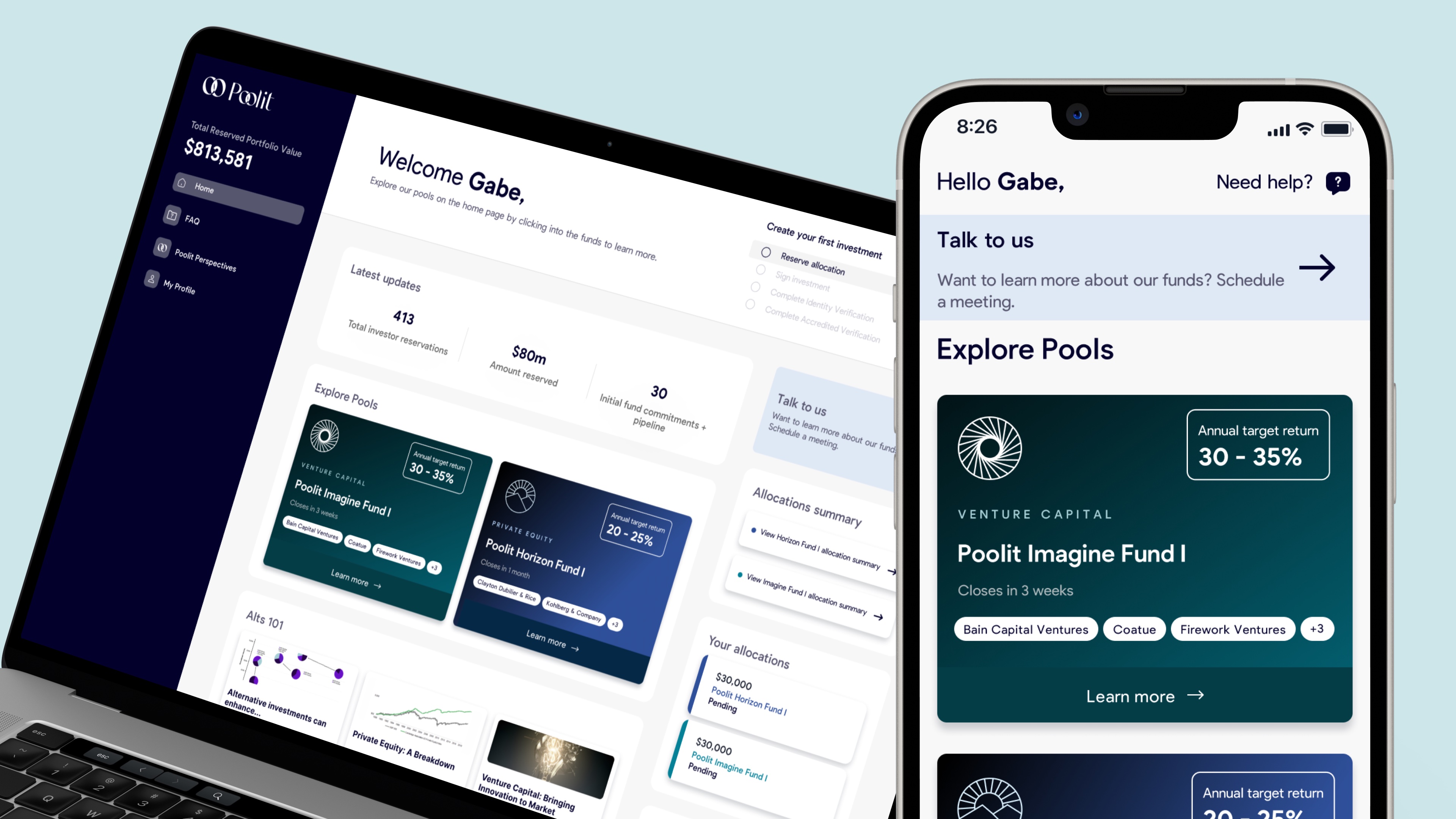 The company makes money by charging a percentage of assets under management from investors — an annualized 1% management fee. Most firms, Rice said, charge investors before they even put their money into any funds, and then management and sometimes performance fees on top of that.

So that investors have some flexibility, Poolit has established a limited quarterly share repurchase program that kicks in following the first year in the investment.

To be clear, while Poolit certainly has the potential to bring institutional-style funding to more people, it is still for now only for those in a certain higher income bracket. As defined by the U.S. Securities and Exchange Commission, the criteria to be an accredited investor is having a net worth over $1 million, excluding one’s primary residence — either individually or with a spouse or partner and having an individual income of over $200,000 or combined income of $300,000 in each of the prior two years, “with reasonable expectations for the same for the current year.”

Historically, one has been required to have had over $5 million in liquid assets to be a qualified purchaser.

For Rice, who grew up in rural Alabama before attending Brown University, it would be a dream to one day open access to investing in VC and private equity funds to an even broader pool of people.

“There is a big part of me that wants to expand this to true retail, but that’s a regulatory question, and less of something I could actually control,” he told TechCrunch.

Rice believes his growing up with a challenging socio-economic background and working as a young, black gay investor as an adult enabled him to tackle the building out of Poolit “from a different lens.”

“I thought it was a worthwhile thing to do because of the disparity that exists,” he told TechCrunch. “When you look at the space that we operate in and you look at the founders of a lot of these other companies, there is a lot of similarity in their backgrounds. And I think that’s why people have been tackling the problem in a lot of the same ways.”

Harlem Capital managing partner Jarrid Tingle told TechCrunch he was drawn to Rice’s “passion and grit” in addition to the company’s attempt to democratize access to investments.

“Poolit’s tech platform is phenomenal. Relationships with top firms are essential,” Tingle wrote via email. “Dakotah and the investor group have a significant advantage there. And, Dakotah and the team’s sense of urgency is unmatched.”