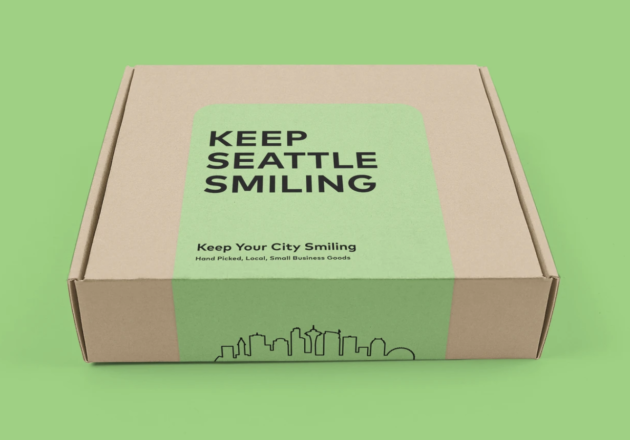 Sam Eitzen’s Seattle-based photo and video booth startup The SnapBar is in the business of making people smile for the camera at hundreds of events and parties. As that industry has been decimated by the coronavirus outbreak, the company is pivoting like many to try to stay alive — and to keep people smiling.

Eitzen and his team have launched Keep Your City Smiling, a new venture aimed at keeping his employees working while trying to help small businesses survive. The idea is gift boxes, packed with five to seven local items crafted by struggling businesses in the Seattle area.

Boxes themed for Portland, San Francisco and Los Angeles are planned in the coming weeks after they get traction in Seattle and prove the concept works. They’re also working with corporate accounts in other cities around the U.S. for bulk orders of custom gift boxes.

Some of the vendors Keep Your City Smiling is working with include Hey Atlas Creative, Gig Harbor Candy Company, Riverdance Soapworks, San Juan Sea Salt, Girl Meets Dirt, Olympic Candle Company, Storyville Coffee, and more. Eitzen said the list is growing fast and they hope to partner with as many companies as possible.

The SnapBar, which Eitzen started with his brother in 2012, grew aggressively starting around 2015 and has 18 full-time employees and about 30 part-time team members who who run photo experiences at events in markets that include Seattle, Portland, San Francisco, Los Angeles, and Austin.

“This March we were expecting around 140 to 160 events. That would translate to about $180,000 to $200,000 in sales,” Eitzen said. “On the sixth of March, we had about 99 events scheduled in total for the month (we tend to book lots of events last minute). So far, 65 have canceled and bookings have simply stopped coming for this month as well as April, May, and now even summer is being affected”

The SnapBar was able to complete about 20 to 30 events in the first week of March before government regulation on events set in.

So far the company has been able to keep its whole team. Eitzen and his co-founder cut their salaries by half and other leadership members volunteered their own salary reductions. They’ve negotiated cheaper rent on office space and are doing whatever belt tightening they can to extend their runway to about six to nine months, if possible.

“We’re not there yet, and we’ll take more drastic measures if we need to, but minimizing expenses and generating any cash flow we can is all helping!” Eitzen said via email. “We don’t know when in-person events are coming back, so we’re needing to pivot and be creative until they do.”

Eitzen said they’re trying other things to keep The SnapBar team employed including rushing the launch of online photo booth software for virtual events in the next two weeks. They’ve also created their first-ever “mega-sale” allowing people to pre-book The SnapBar’s Selfie Stand product for up to 50 percent off and use it anytime this year.

“We’re doing everything we can to shore up expenses and generate revenue in a time that just doesn’t look good for the in-person event industry,” Eitzen said. “We hope, deeply, that the economic fallout affecting small businesses is a ‘speed-bump’ we can all get over together without bottoming out.”