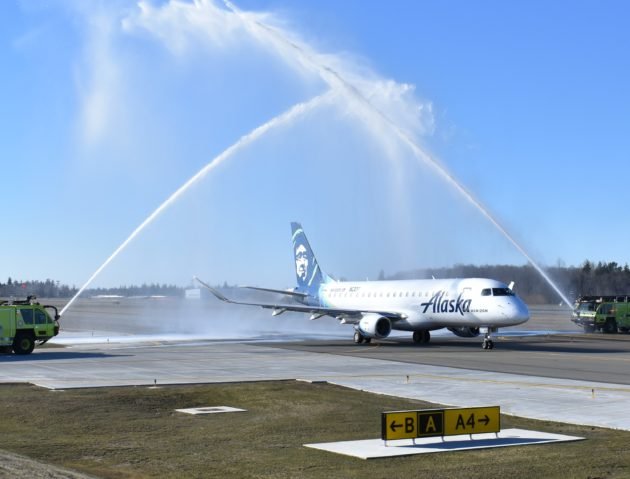 EVERETT, Wash. — Today marks a “first” for the new passenger airline terminal at Everett’s Paine Field, thanks to Alaska Airlines’ kickoff of daily service. But it’s a “second” for Thomas Paine, the grandnephew of the airport’s namesake.

Paine and another grandnephew, Nicholas Moe, were here in 1955 when the airport dedicated a bust of their granduncle, airmail pilot Topliff Olin Paine, who grew up in Everett. The bust has since disappeared, but to mark today’s terminal opening, dignitaries dedicated a bronze statue of the elder Paine, standing right on the curb where passengers walk in to catch their flights.

Thomas Paine and Moe pulled the veil off the statue, rekindling 64-year-old memories in the process. “Things have changed a lot since then,” Paine said.

When it’s fully up and running, the 30,000-square-foot terminal will offer 24 daily nonstop flights to eight destinations in the western U.S., providing a quicker alternative to Seattle-Tacoma International Airport for northern Puget Sound communities.


Alaska kicked things off today with three departures, starting with a 10 a.m. VIP-laden flight to Portland and following up with flights to Las Vegas and Phoenix. The number of departures will eventually rise to 18 a day, with Los Angeles, Orange County, San Diego, San Francisco and San Jose added to the mix.

At the end of the month, United Airlines will kick things up a notch with six daily departures to Denver and San Francisco. Both airlines will be using 76-passenger, single-aisle Embraer 175 jets.

One-way tickets to Portland on Alaska cost as little as $44, and daily on-site parking ranges from $20 for economy-class to $40 for valet service.

Here we go!! Boarding for #FirstDayAtPAE flight to @LASairport begins now. (Agent just offered to check carry-ons to “final destination”… but what if I’m coming right back to @FlyPaineField?? 😎) pic.twitter.com/vtsv2x1AvJ

Alaska had planned to start service from Everett back on Feb. 11, but the government shutdown forced a delay in getting the Federal Aviation Administration paperwork squared away.

“We’ve had our setbacks, we’ve had our delays, but today is the day,” said Gary Beck, CEO and president of Alaska Air’s Horizon Air subsidiary, which will be handling operations in Everett.

Until today, Paine Field was a general-aviation airport, heavily used by Boeing for flight-test and delivery operations related to the company’s airplane assembly plant next door. Historians note that Alaska Airlines used the airport for charter flights and airplane maintenance in the 1940s and 1950s. “We had our headquarters here, before we moved officially to Seattle proper, but we’re back,” Andrew Harrison, executive vice president and chief commercial officer of Alaska Airlines, said at a kickoff news conference.

Getting the terminal built was a five-year project for a public-private partnership led by New York-based Propeller Airports.

“As a pilot, and just somebody who loves this industry, this was a dream come true for me,” Propeller CEO Brett Smith told the VIP crowd. “But more importantly … as my father had always taught me, it’s important to give back. And this is going to give back in so many ways that we don’t even know today.”

Having passenger flights available in Everett is designed to benefit gridlock-weary travelers in the Seattle area, but it should benefit Snohomish County as well, said U.S. Rep. Rick Larsen, D-Wash., who represents the Everett area and now chairs the House Aviation Subcommittee.

“Opening Paine Field for commercial service continues to build our economy in Everett and in Snohomish County, supports local jobs and drives tourism for the region,” Larsen said. 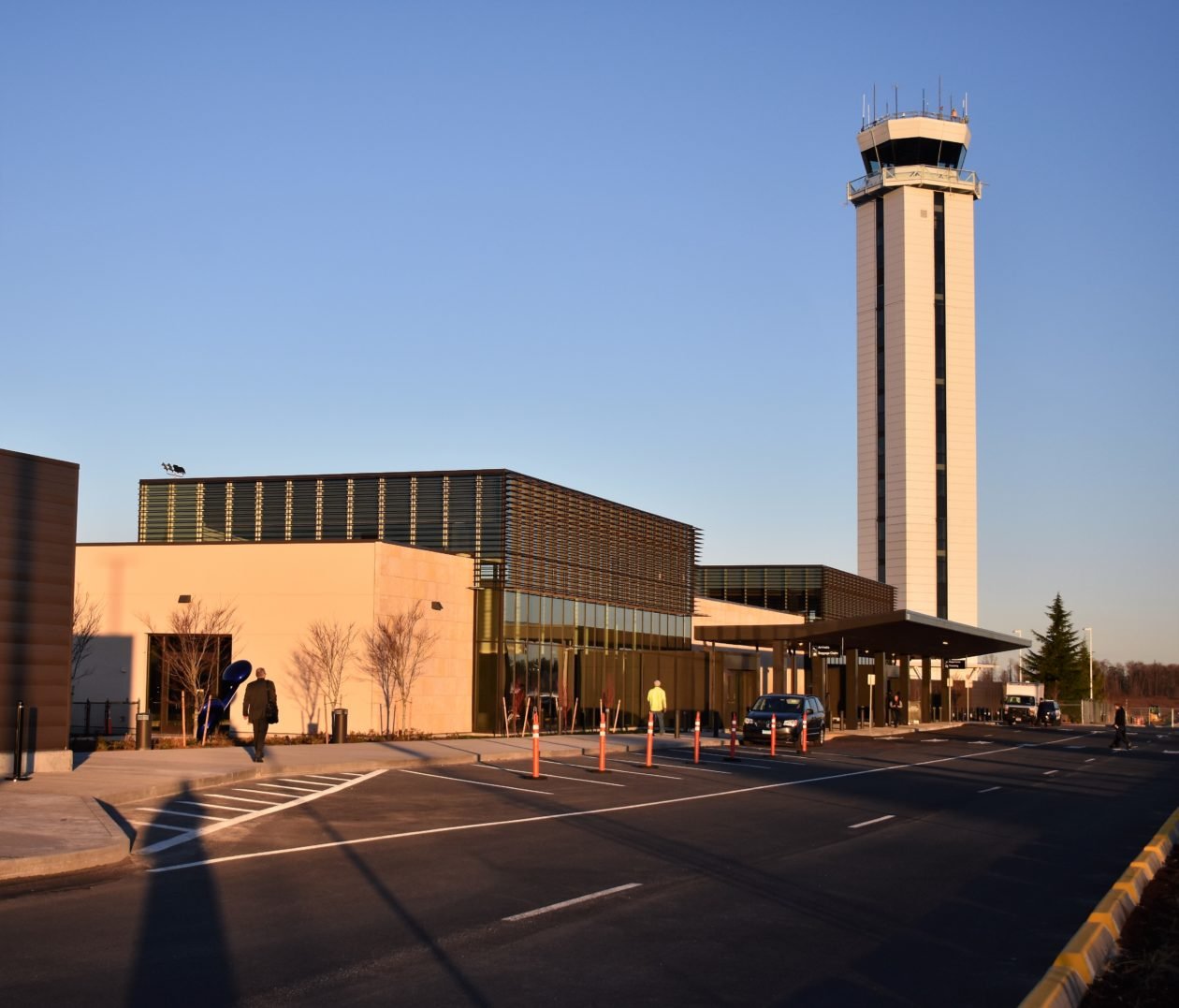 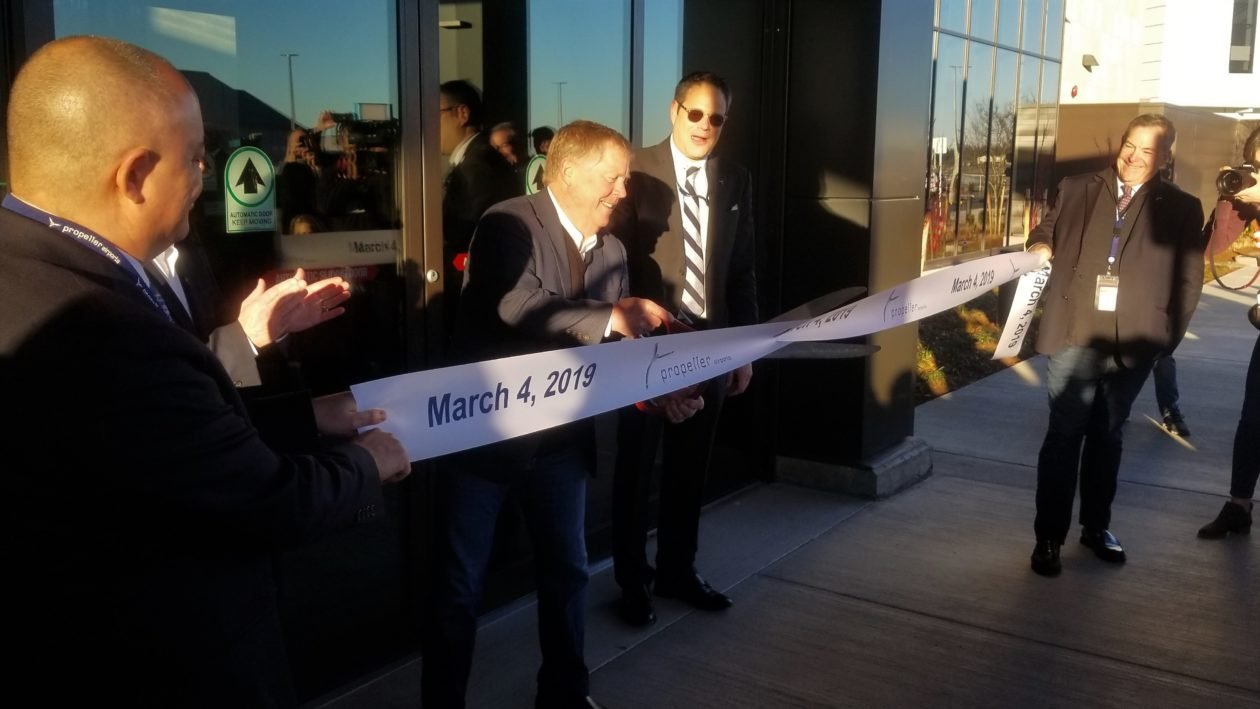 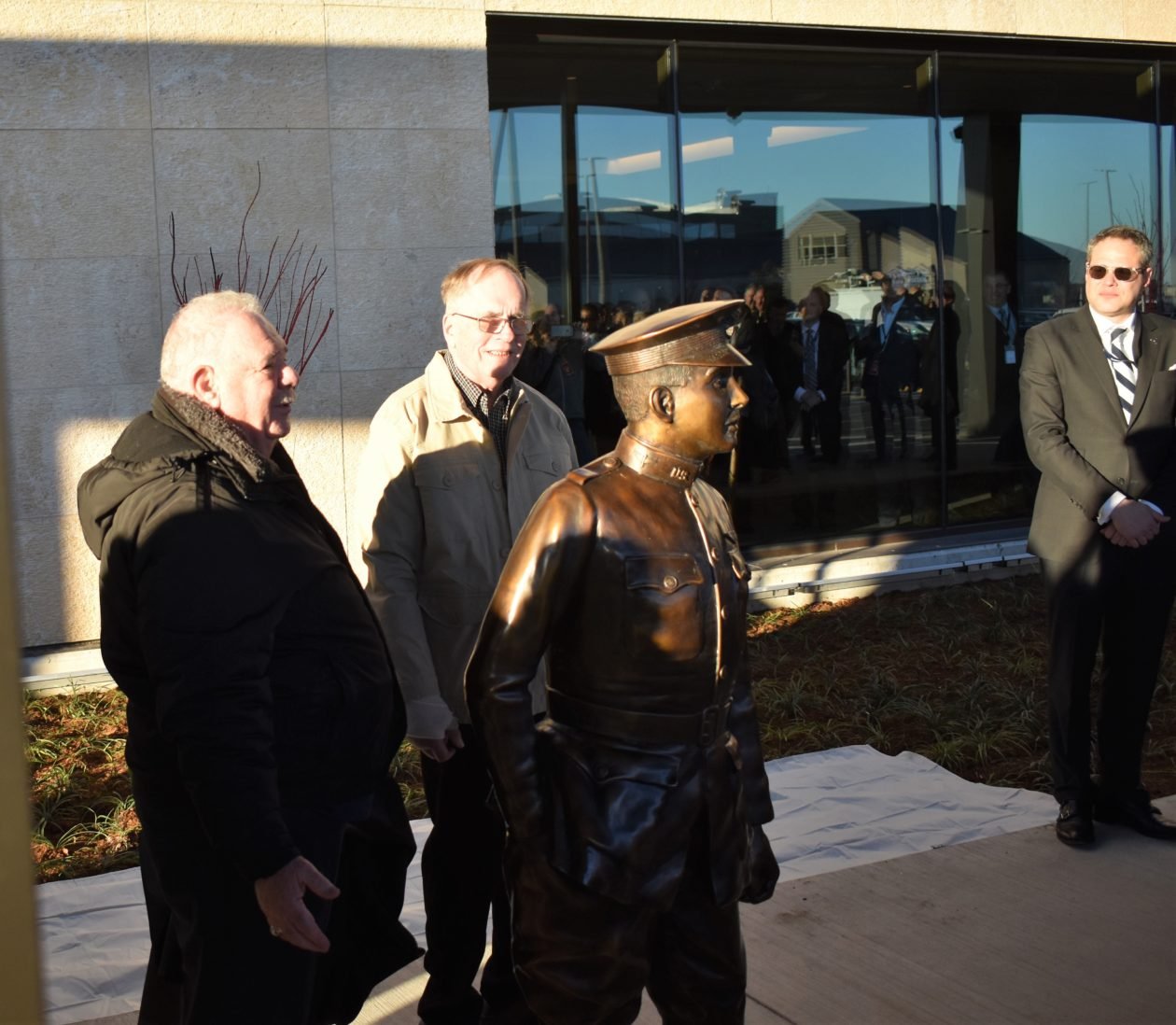 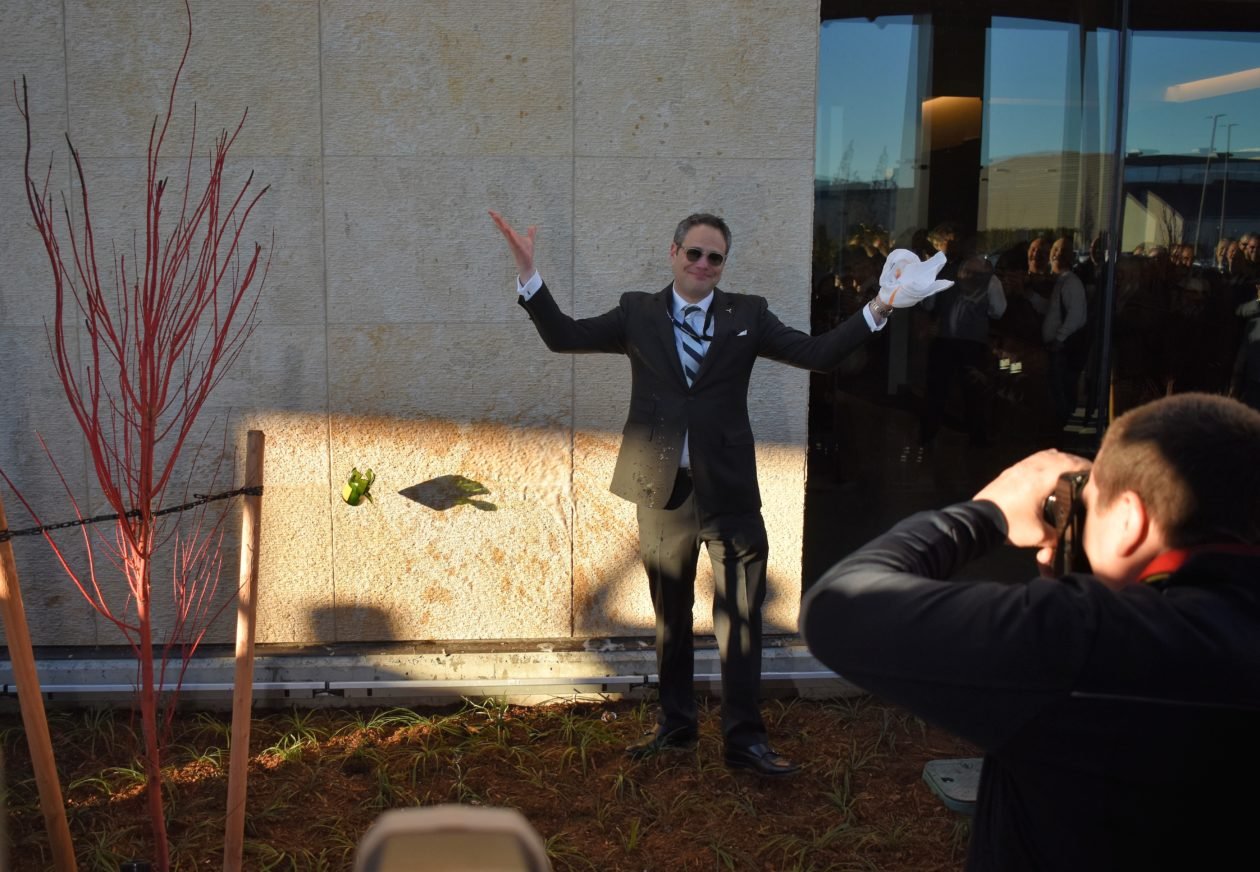 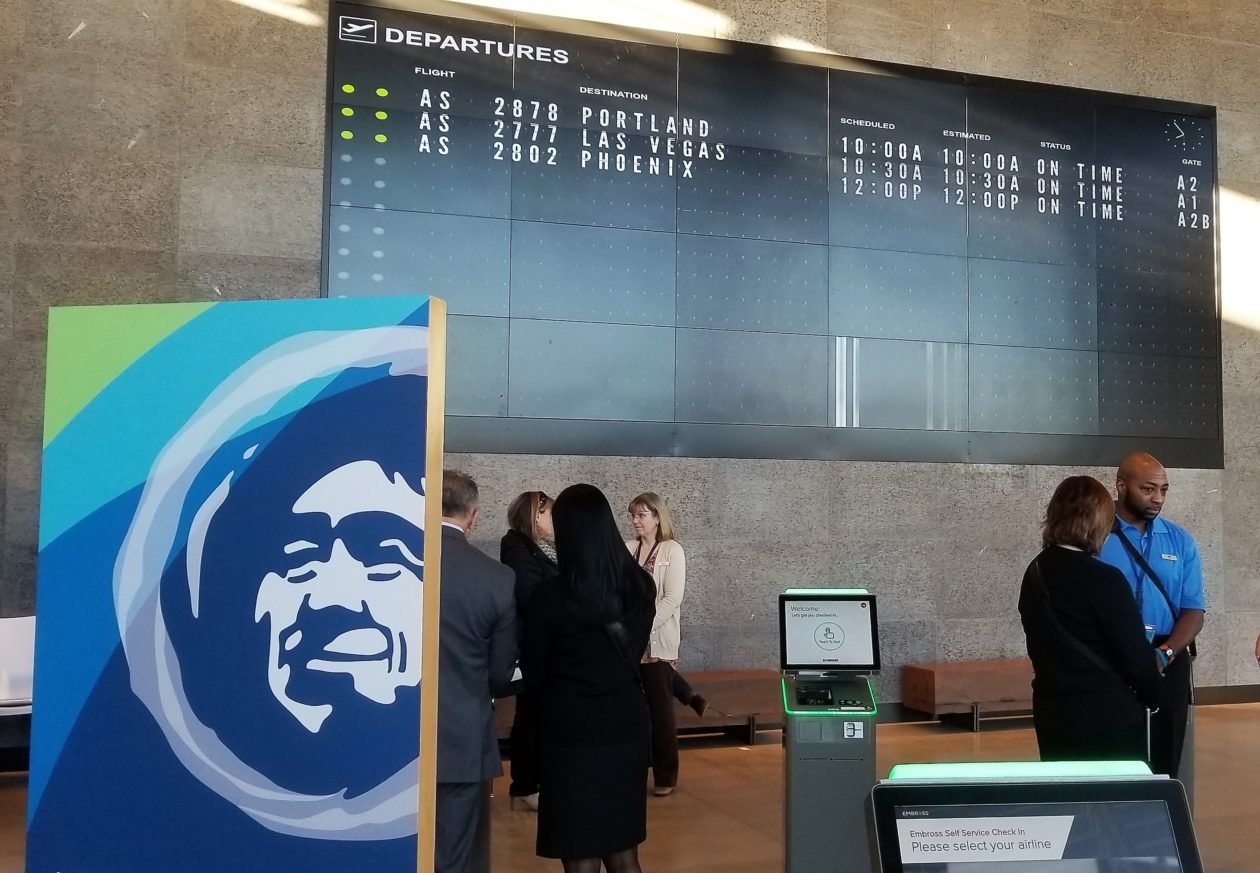 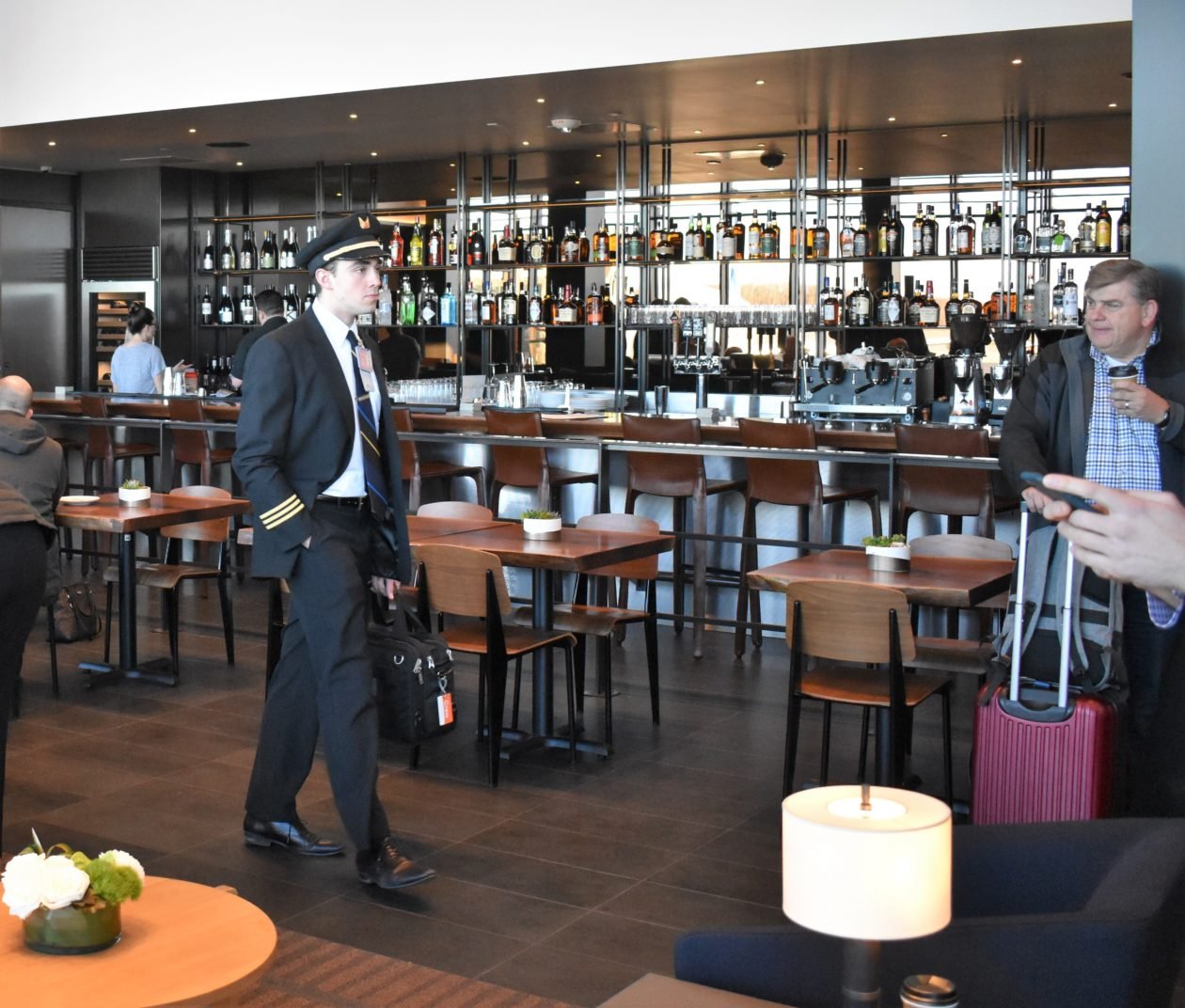 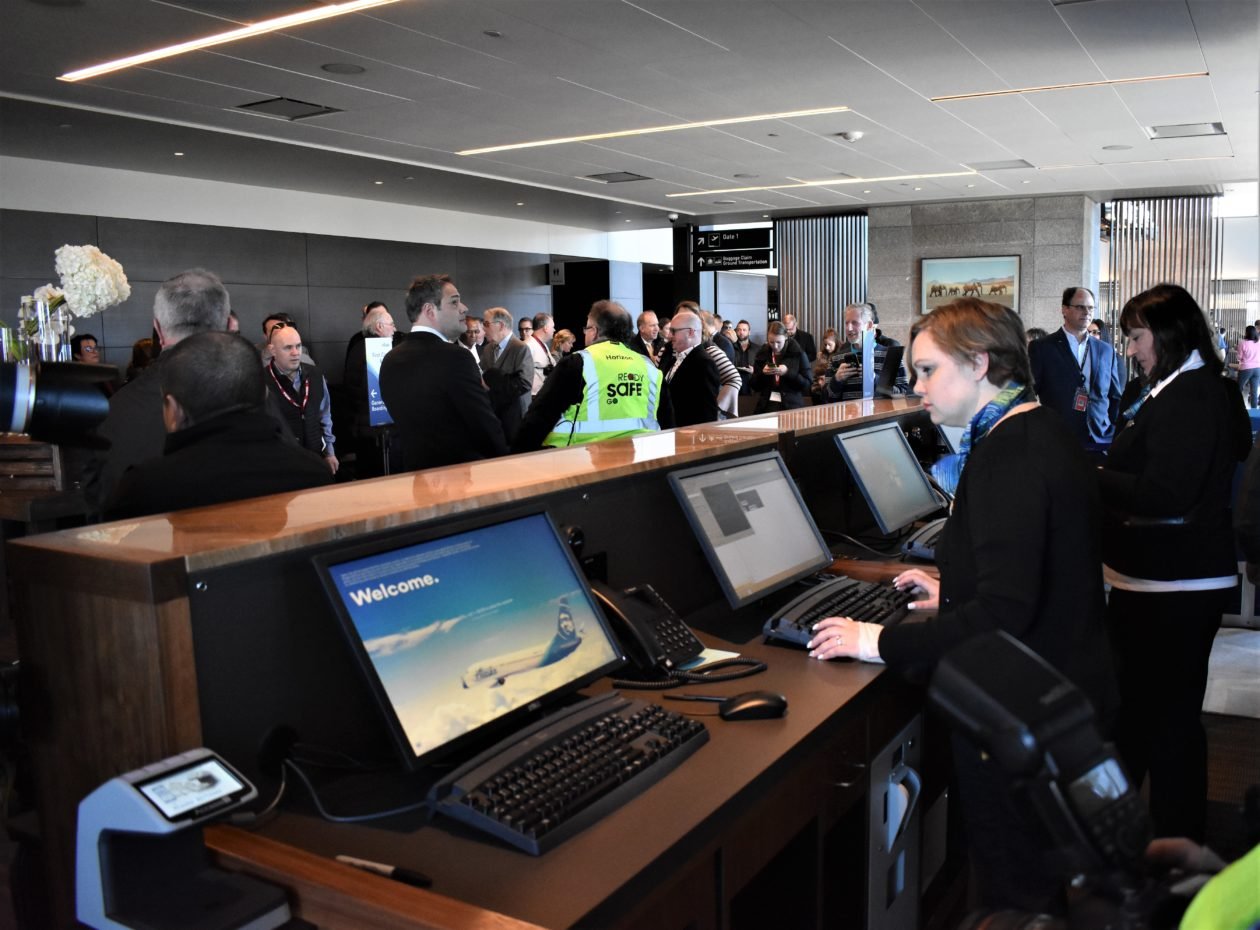 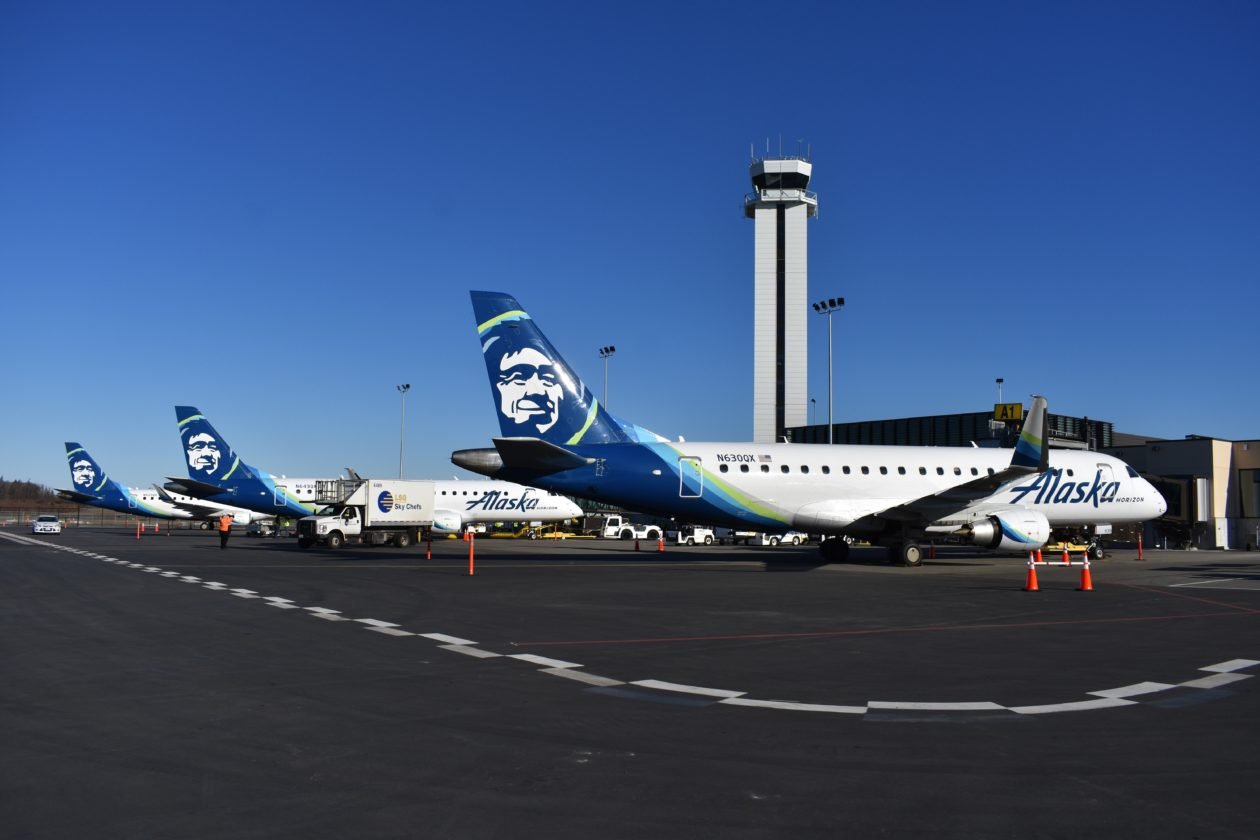 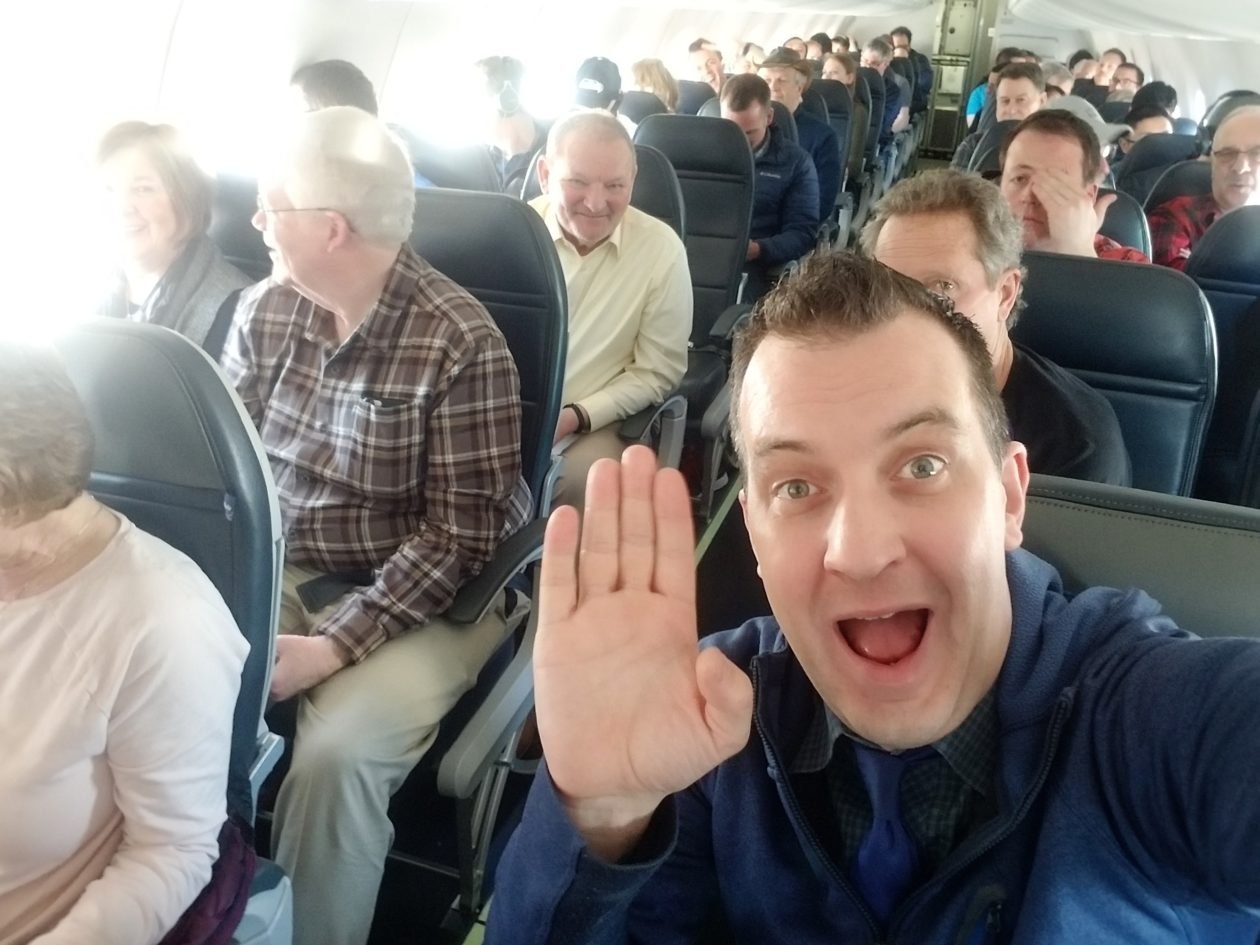 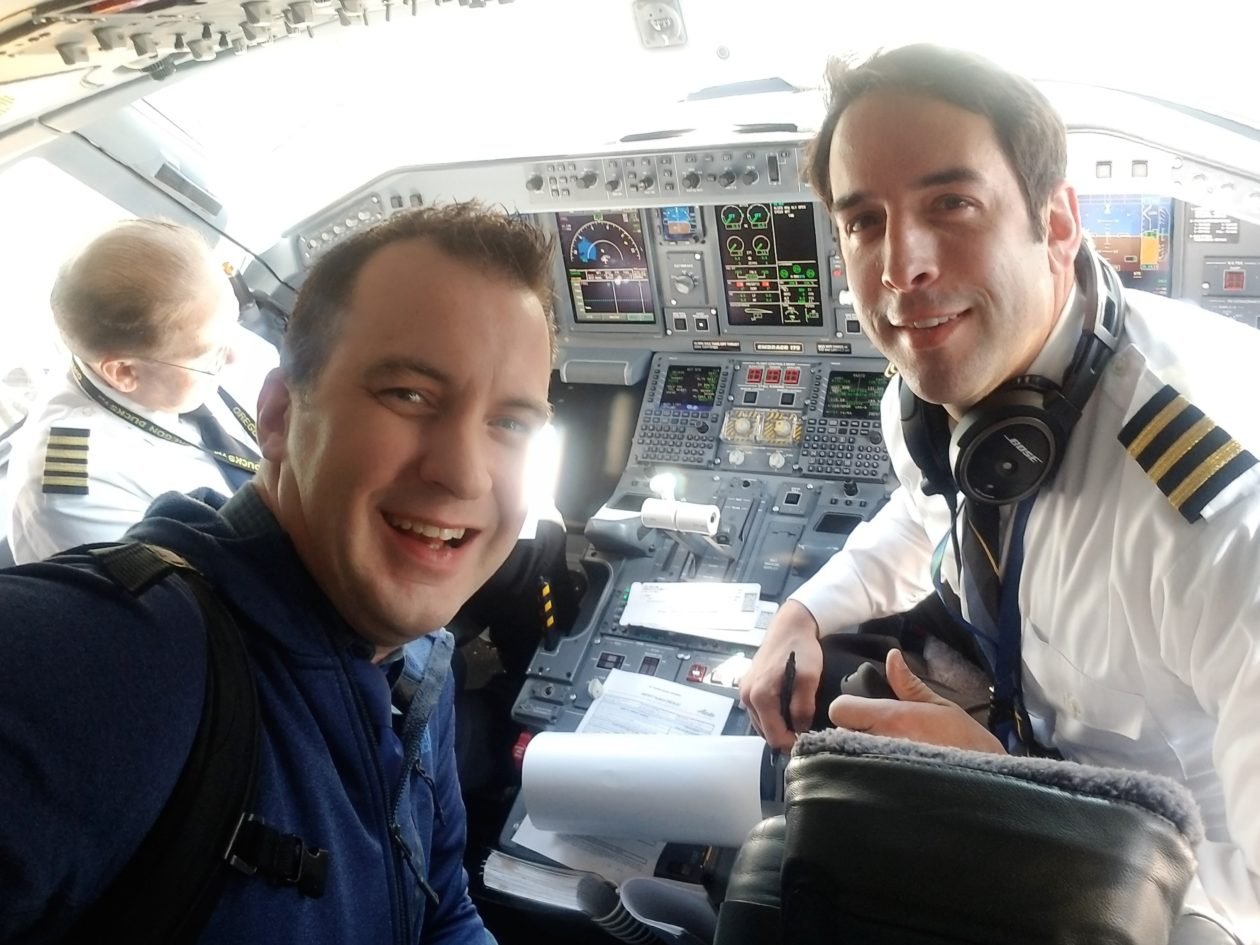 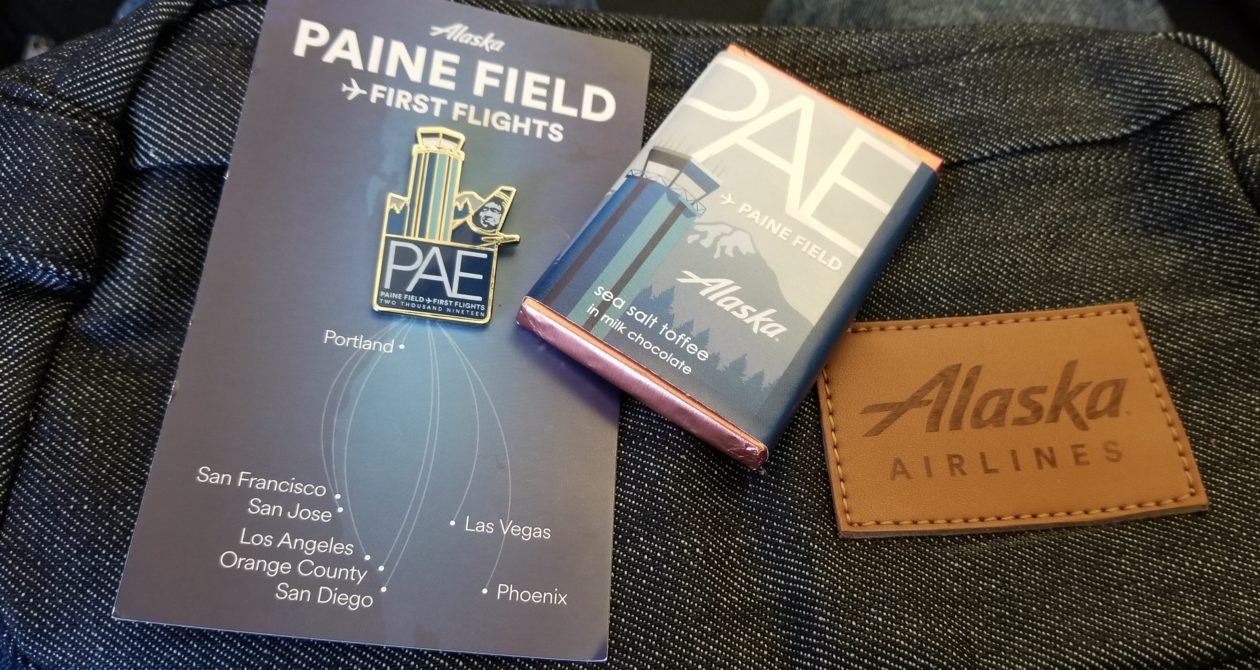 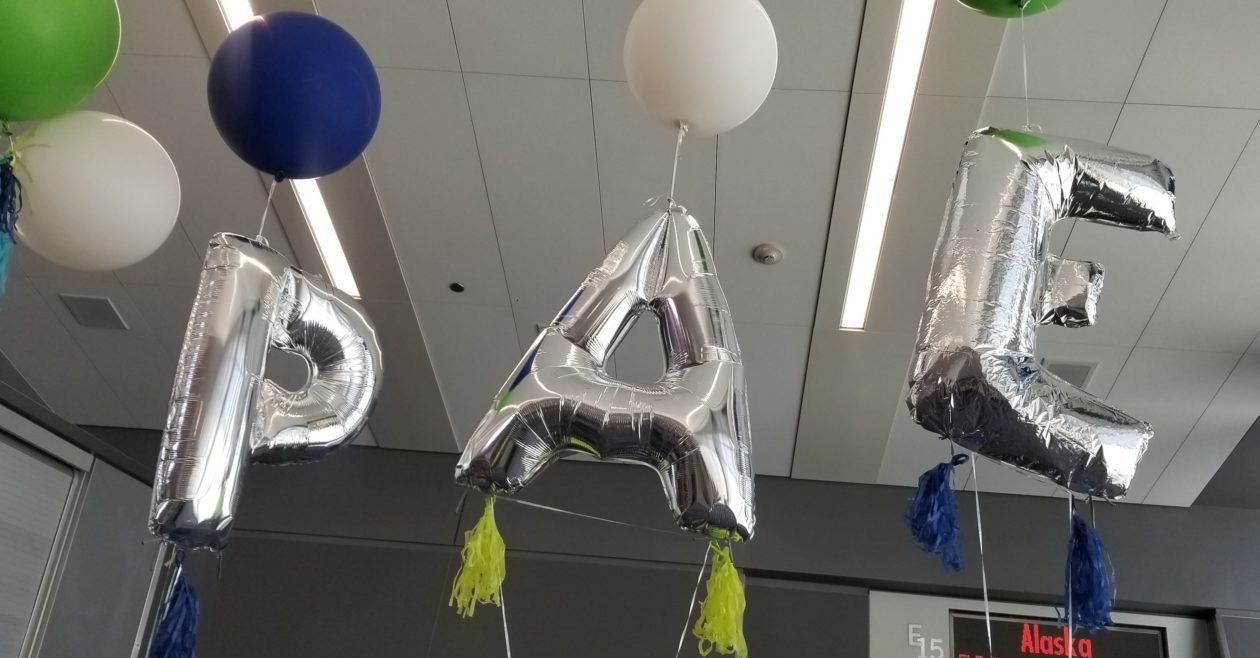 If today’s opening-day activities are any indicator, the terminal could be a tourist attraction in its own right: Comfy chairs and couches are spread throughout the passenger lounge, with a wine bar on one side, a clear view of the Olympic Mountains visible through full-length windows on the other side, and a fireplace at the end of the hall.

“It’s a fantastic airport, clean, smooth, easy, and I think, above all, it’s homey,” said Keith Hansen, who was taking this morning’s inaugural flight to Portland. “You don’t feel like you’re in a sterile terminal. You feel like you’re at home.”

“This is really going to be a big deal,” said Kurt Beecher Dammeier, who founded Beecher’s Handmade Cheese in Seattle — and has a cafe at Sea-Tac that’s similar to the one going up at Paine Field. “It’s kind of like having a major-league sports team. Having a second airport defines you as a major metro area. … We love Sea-Tac, and competition is always a good thing.”

Today’s grand opening seems certain to put Paine Field alongside Sea-Tac in the minds of air travelers when they think of the Seattle area, just as they put Midway alongside O’Hare when they think of Chicago. And that could well bring a big shift in civic perspective, even for the folks in the neighborhood.

“I’ve always referred to Seattle as the southern gateway to Snohomish County,” County Executive Dave Somers joked. “I can’t do that anymore. We have our own gateway.”