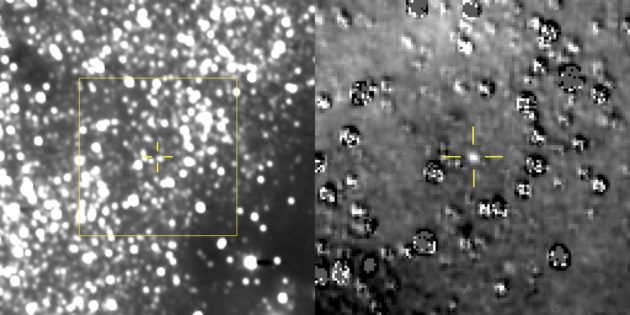 The next few months are due to bring two amazing interplanetary encounters: a rendezvous with an asteroid and a flyby past a mysterious icy object beyond Pluto on the solar system’s edge. Over the past few days, we’ve gotten our first fleeting peeks at both targets, and the view will only get better from now on.

Today, the icy object known as Ultima Thule had its turn in the spotlight, roughly 4 billion miles from Earth. NASA’s New Horizons probe is scheduled to zoom past and take close-up pictures on the night of Dec. 31-Jan. 1, but right now it’s still more than 100 million miles away.

It’s been more than three years since New Horizons made its memorable flyby of dwarf planet Pluto, but the set of 48 images captured on Aug. 16 demonstrate that the probe’s Long Range Reconnaissance Imager, or LORRI, is up to snuff.

Processing the imagery was a challenge. Researchers artificially subtracted the light from background stars to help Ultima Thule stand out, close to the location in the sky where they expected to find it.

“The image field is extremely rich with background stars, which makes it difficult to detect faint objects,” Hal Weaver, New Horizons project scientist and LORRI principal investigator from the Johns Hopkins Applied Physics Laboratory, said in a news release. “It really is like finding a needle in a haystack. In these first images, Ultima appears only as a bump on the side of a background star that’s roughly 17 times brighter, but Ultima will be getting brighter – and easier to see – as the spacecraft gets closer.”

Last week, NASA showed off the first pictures of a blip that’s closer at hand, the asteroid Bennu. The OSIRIS-REx spacecraft has already traveled about 1.1 billion miles since its launch in 2016, and it’s only about 1.4 million miles away from an encounter that’s set for Dec. 3.

“Now that OSIRIS-REx is close enough to observe Bennu, the mission team will spend the next few months learning as much as possible about Bennu’s size, shape, surface features, and surroundings before the spacecraft arrives at the asteroid,” Dante Lauretta, OSIRIS-REx principal investigator at the University of Arizona, said in a news release issued Friday. “After spending so long planning for this moment, I can’t wait to see what Bennu reveals to us.”

As OSIRIS-REx closes in, it will study Bennu’s surface composition in greater detail and position itself first for a series of flybys, and then a closer-in orbit. It’s due to touch the surface for sample collection in 2020, and then head back to Earth to drop off the samples over the Utah desert in September 2023.