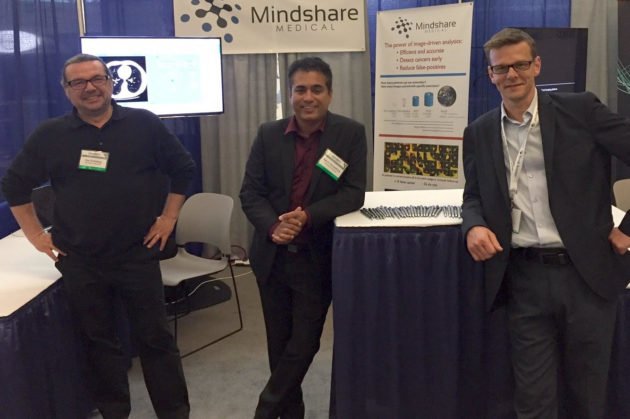 You might think diagnosing cancer is easy: Someone either has a cancerous tumor or they don’t.

In practice, it’s much harder. Telling the difference between a deadly and a harmelss lump is literally “beyond our perception” with current imaging technology, Ilya Goldberg told GeekWire. That’s where he thinks artificial intelligence can step in.

Goldberg is a longtime biologist and machine learning expert, and he is the co-founder and CTO of Mindshare Medical. The startup is developing artificial intelligence tools that can diagnose cancer using imaging data that is invisible to the human eye.

On Thursday, Mindshare announced its image analysis product has been cleared to launch in Canadian hospitals, its first foray into the marketplace. The company is also pursuing clearance in the E.U. and the U.S. and has been testing the technology in private trials for several years.

The pair started working on the tech behind Mindhsare, along with co-founder and COO Samir Chowdhury, after spending years in academic research. All three founders realized that imaging was a hugely important part of medicine, but that it wasn’t working as well as it could.

“At this stage, imaging is the primary way of screening” cancer and other diseases Calhoun said — but humans aren’t particularly good at analyzing these images. “Different people will get different answers and we’re not very good at describing them, either in a quantitative or a qualitative way.”

During his time as an academic, Goldberg tackled this problem by developing AI technology that could identify images of tumors simply by comparing it to other images from different patients, picking up on elements undetectable to the human eye.

“It’s not like we’re missing something that we could normally see if somebody draws our attention to it. It’s literally stuff we can’t latch onto,” Goldberg said.

“I can think maybe in five dimensions in a good day. We’re talking about dozens or hundreds of dimensions,” Calhoun added.

The ability to more quickly diagnose cancerous tumors could be a game-changer for patients. Today, if a doctor notices an unusual lump on a scan or image, the patient will be told to come back in a few months to have another scan or a biopsy.

“Come back in 6 months is always the wrong answer,” Goldberg said. For patients who do have cancer, that time could mean the difference between quick, easy treatment and a prolonged battle against the disease.

For patients who do not have cancer, the delay and further procedures cause unneccesary anxiety, money and often physical pain.

Mindshare Medical has six employees, most of whom are based out of its headquarters at a WeWork location in Seattle. The company has raised $4.1 million to date.