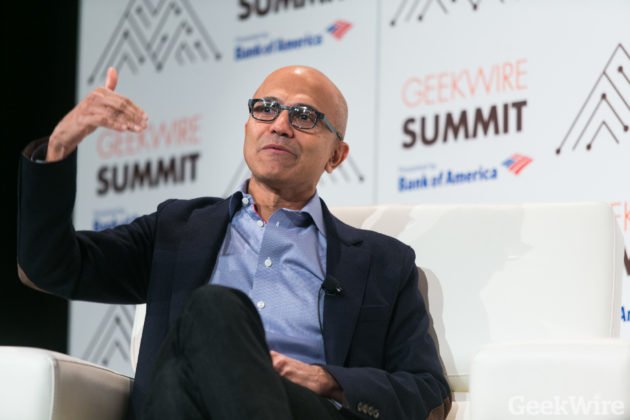 Microsoft will close out a record-setting fiscal year for the company today, reporting earnings for its fourth quarter.

RELATED: Microsoft posts $110B in revenue for the year, cruising past Wall Street expectations again

Microsoft stock has shattered record after record in recent months, eclipsing $100 per share for the first time in June and rising 43 percent between June 30, 2017 — the day its fiscal year ends — and the same time this year. Microsoft’s market cap hit $800 billion for the first time just last week, and the tech giant trails only Google parent company Alphabet, Amazon and Apple as the most valuable U.S. companies.

The cloud has been at the heart of Microsoft’s rise over the last year, during which it hit its self-imposed goal to reach a $20 billion-a-year run-rate for its commercial cloud software, which includes Azure, Office 365 Commercial, Dynamics 365, and a few other things. One deal that won’t show up on this quarter, but is evidence of the strategy laid out by Azure’s Jason Zander in an interview with GeekWire earlier this year to court retail customers wary of Amazon, is the five-year deal Microsoft signed with Walmart on Monday night. Other major deals in the quarter include travel giant Sabre and a group of U.S. intelligence agencies.

We’re in the time of the year when Microsoft tends to spring big changes and layoff announcements on observers. Microsoft already announced one major reorganization this year and reports abound about a small round of recent sales layoffs.

Analysts surveyed in advance by Yahoo Finance expect Microsoft to post earnings of $1.08 on $29.2 billion in revenue. Microsoft hasn’t failed to meet or exceed Wall Street’s expectations since April 2016.

What else we’ll be watching

There are a lot of goodies buried deep in Microsoft’s earnings reports related to its various businesses. Here are a couple of trends we’ll be following.

The biggest news of the quarter was Microsoft’s $7.5 billion acquisition of GitHub. Microsoft made a couple other acquisitions in the last few months, scooping up San Francisco startup Bonsai to bolster its machine learning and artificial intelligence offerings and edtech startup Flipgrid.

Microsoft pledged to spend $5 billion on Internet of Things projects over the next four years and another $25 million over five years for its AI for Accessibility initiative.

A couple big events fell in the most recent quarter. At the Microsoft Build developer conference in May, the company announced a new partnership with drone maker DJI, showed off the very first integrations between its digital assistant Cortana and its Amazon counterpart Alexa and doubled down on its IoT vision.

At E3 in June, Microsoft announced it had acquired four game studios and created a new one. The company also revealed that it is working on the next generation Xbox console, and a new entry into the vaunted Halo franchise is on the way.

Microsoft is constantly making changes Office 365, and this quarter the core programs got a facelift. Microsoft also deepened ties with Adobe, integrated the company’s document signing and PDF services further into Office.