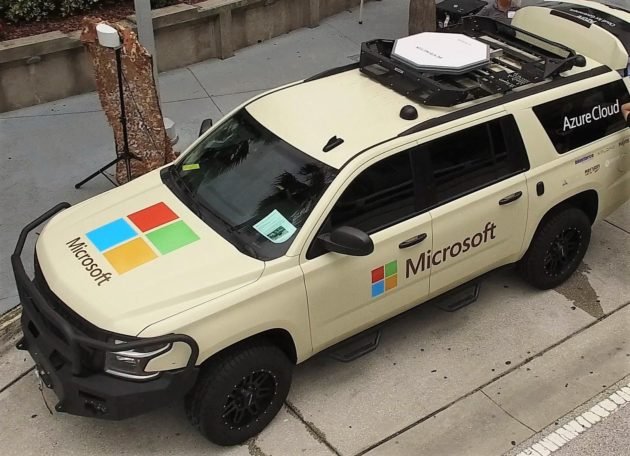 REDMOND, Wash. — The vehicles sitting in the parking lot here at the headquarters of Kymeta Corp., a flat-panel antenna startup backed by Microsoft co-founder Bill Gates, are a car fan’s dream. But Microsoft’s Scott Montgomery says you have to look under the hood. And under the roof.

“The vehicles themselves are literally just four wheels and an engine to get the platform where we need it to go,” Montgomery, who’s a senior industry solution manager at Redmond-based Microsoft, told GeekWire.

The platform is a combination of hardware, software and cloud computing connections that can turn a sport-utility vehicle into a mobile communications hub for police officers, firefighters or disaster response teams, complete with industrial-strength data servers and satellite links.

Kymeta, Microsoft and other vendors organized today’s parking-lot demo to show journalists, officials and VIPs how their platforms can work together to address future worst-case scenarios, such as the West Coast earthquake threat known as the Really Big One.

Mike Ryan, a King County emergency management coordinator, said a catastrophic earthquake could knock out terrestrial links as well as power grids, leaving satellite-connected vehicles like the ones on display in the lot as the only reliable links for disaster workers in the field.

“The goal is a connected car … the sooner, the better,” Ryan said.

Kymeta has been working on satellite-based, connected-car technology for years, in league with automotive partners such as Toyota. The company’s KyWay antenna system is integrated into the two converted Chevy SUVs that Microsoft is offering as prototypes for police and tactical teams.

The vehicles also feature Microsoft Azure Edge servers that are capable of taking in data from cameras and sensors, processing that data and sending what needs to be sent to the cloud.

In a worst-case scenario, the data transfer could be done via Kymeta’s stop-sign-sized, flat-panel satellite antennas. But the system is set up to switch seamlessly between satellite links and terrestrial cellular service.

“This is not a satellite-equipped vehicle. This is not a cellular-equipped vehicle. This is a vehicle that’s equipped on backhaul no matter what it is,” said Ben Posthuma, a senior solutions engineer at Kymeta. “The idea is that the vehicle has enough intelligence built into it that it knows what backhaul to use. … The operator doesn’t need to know how they connect. It just does it for them.”

Posthuma said there’s not yet any firm timetable for wide deployment of the system demonstrated on Microsoft’s connected vehicles. But Kymeta, Microsoft and other players in the connected-car market are working hard to get their products into a wide variety of vehicles — starting with emergency response units like the ones that were tested last year in Puerto Rico, and eventually including the family car. 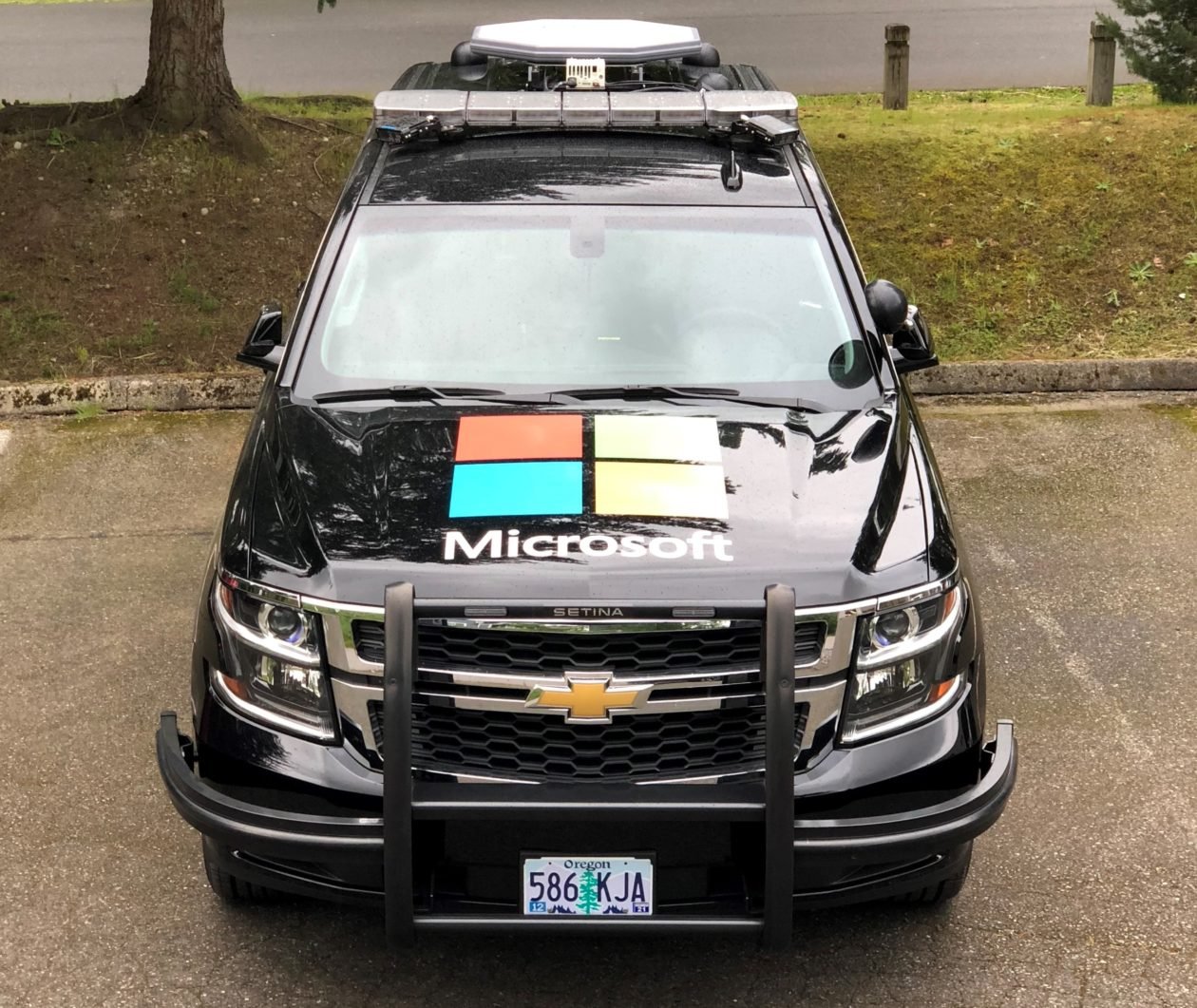 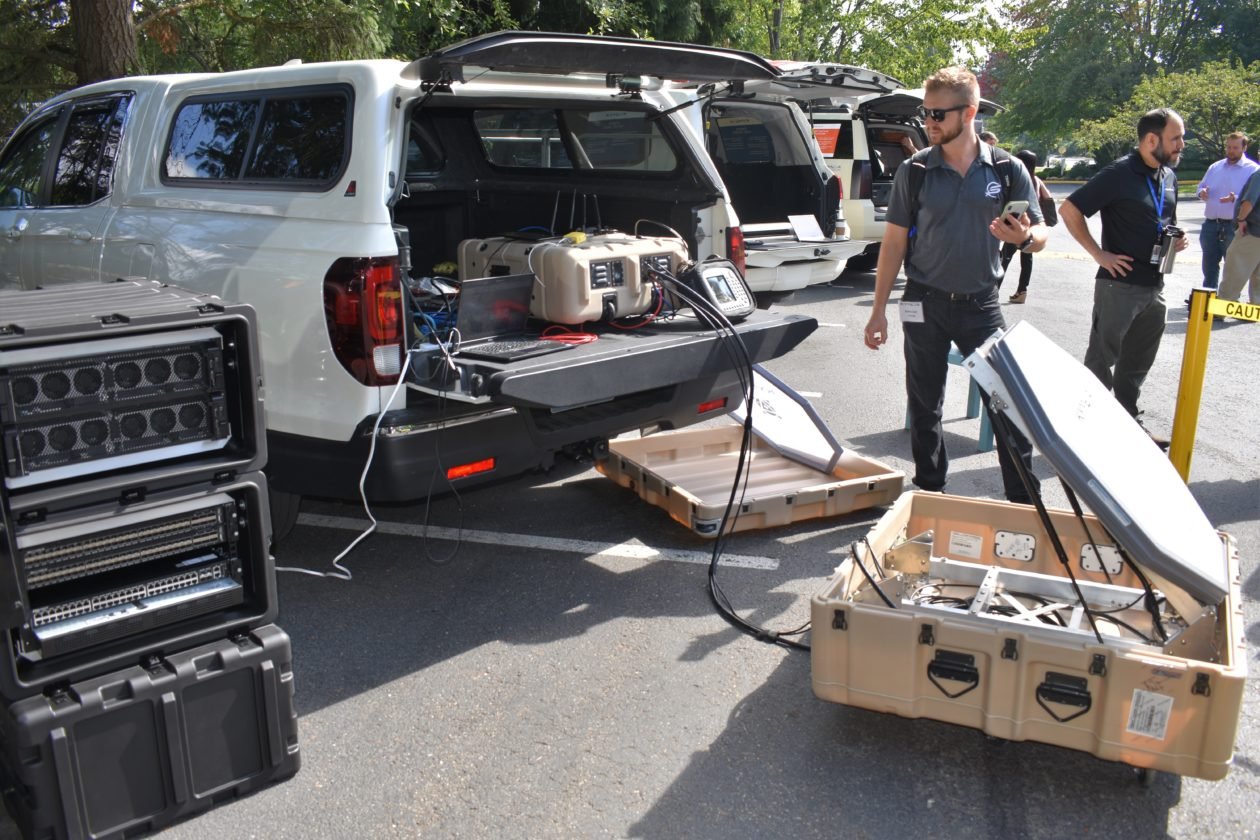 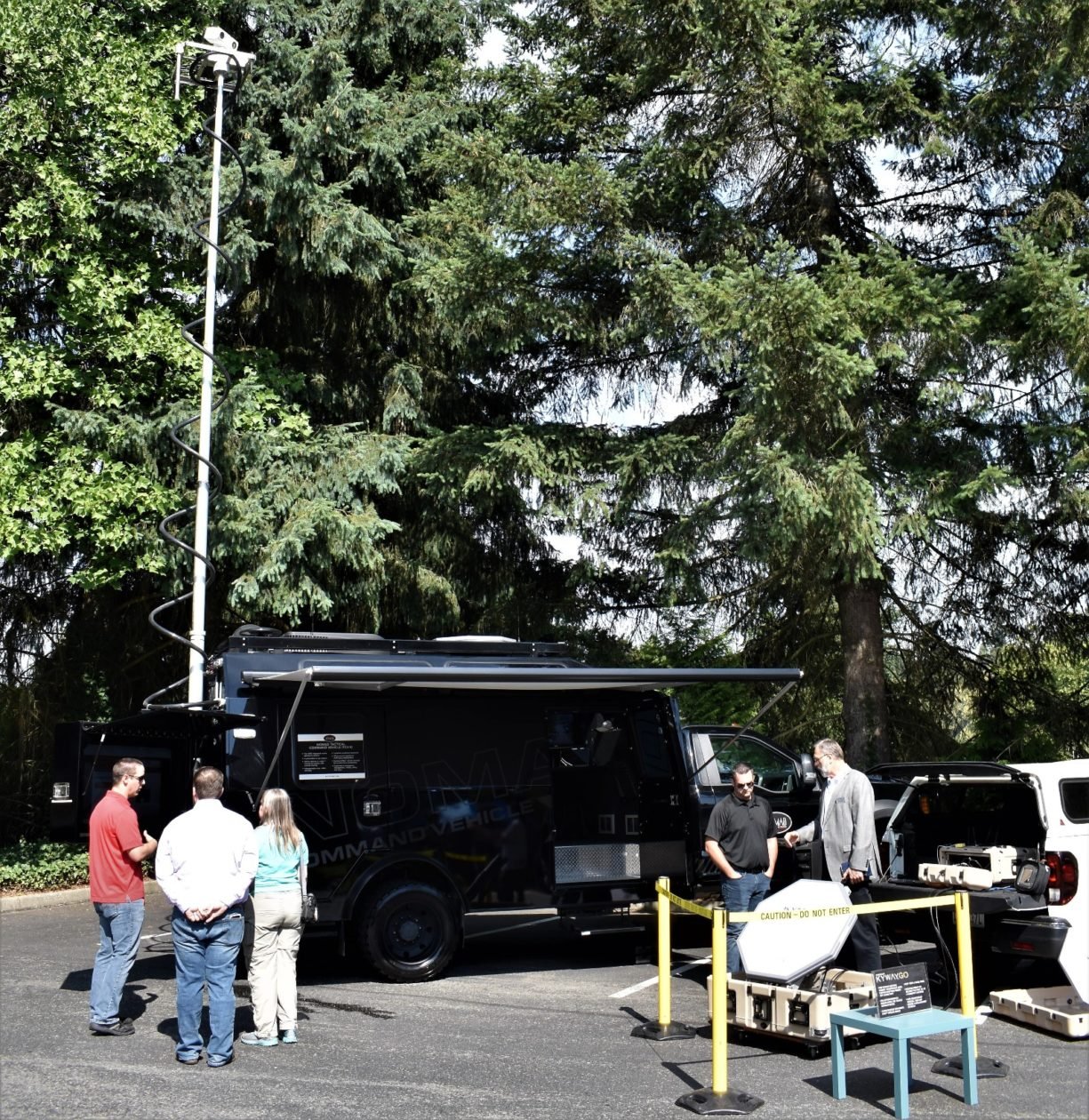 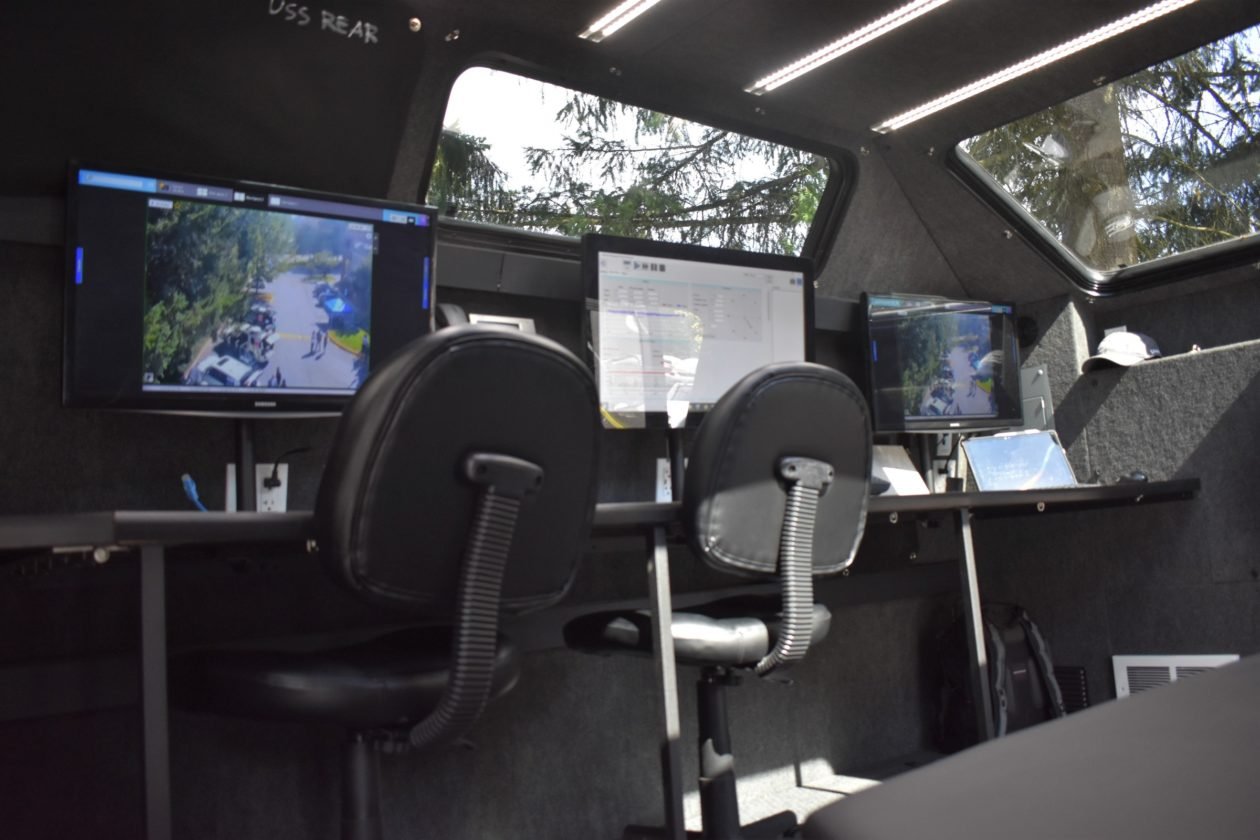 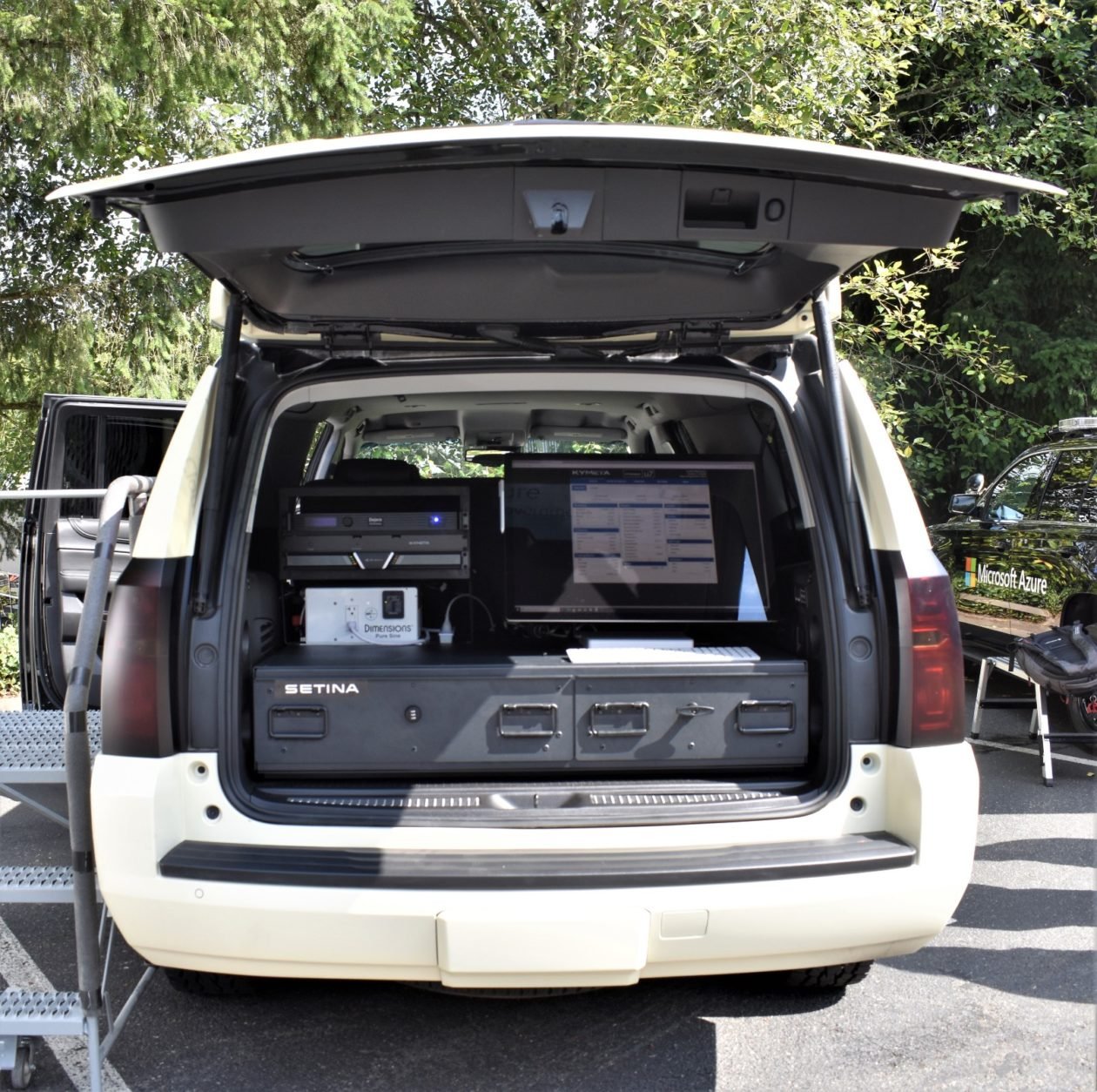 Today, Nomad GCS showed how Kymeta antennas could be incorporated into its Tactical Command Vehicle, or TCV-X, a van that’s equipped with a mobile command center high-tech enough for a Hollywood movie.

Kymeta antennas are due to be installed into a fleet of six TCV-X vehicles ordered by DC Water to keep tabs on the water system in the nation’s capital, said Joseph Sullivan, director of IT services at Nomad GCS.

“Communication-wise, we can take in a variety of different connection methods, from fiber connection to satellite,” Sullivan said. “We try to really outfit it so that as a user of this truck, you don’t have to worry about picking one of these connections. It’s going to pick the best connection.”

Sullivan said connectivity is a top concern for Nomad’s customers. “At the football game, if the cellphone tower didn’t go down, if I still had connectivity, I could do this. … Well, Kymeta really brings that to the table when there’s a need to have connectivity regardless of the terrestrial or cellular landscape,” he said.

It’s not strictly necessary to have the communication system integrated into the vehicle before it rolls off the lot. Kymeta and Microsoft demonstrated a rig that could be packed into the bed of a garden-variety pickup truck and set up onsite.

The system includes a KyWay antenna placed on the ground, a terminal and other equipment spread out in the truck bed — and Microsoft’s Rugged Azure Stack, a portable computer server that’s about the size of a concert speaker when assembled.

Yet another car on the lot demonstrated where Kymeta wants to end up in the connected-car market: It’s a Toyota Land Cruiser with a KyWay antenna that’s built into the roof, cellphone and Wi-Fi antennas built into the spoiler, electronics boxes that are built into the floor, and a cooling system that takes advantage of the car’s air conditioning.

From the outside, you’d never know it’s a satellite-connected data platform.

“VIPs like this,” Posthuma explained. “You can’t be going around in a vehicle that’s outfitted to the nines: It looks very suspicious. If you have something like this, nobody sees it as different from a regular Land Cruiser.”