It’s Heartening To See How, In Kerala’s Darkest Hour, Everyone Is Coming Together To Help 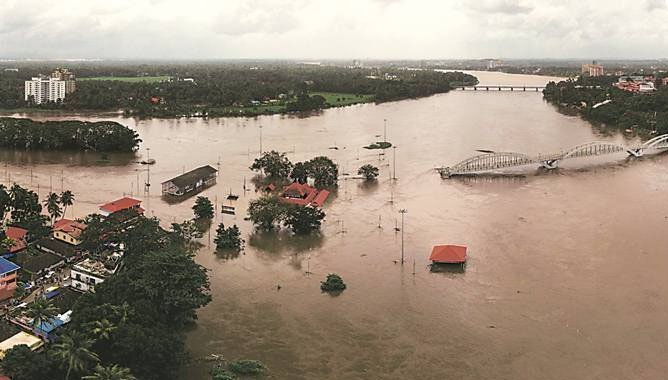 It’s Heartening To See How, In Kerala’s Darkest Hour, Everyone Is Coming Together To Help

Kerala is facing the worst flood in 94 years. Incessant rains have caused havoc in the state claiming hundreds of lives.

In such a scenario, help from each and every quarter counts. This is how people are helping the flood victims in their own little yet brave ways.

1. A blanket merchant from Maharashtra donated his entire stock of blankets to the Kerala flood victims.

28-year-old Vishnu Kachhawa, a migrant labourer, went to Kerala to sell 50 blankets. He donated the entire stock of blankets to the Distrcit Collector when he got to know about the calamity in the state.

Meet #Vishnu. He is a blanket merchant from Maharashtra. He came back to Kerala with 50 blanket to sell. But once he knew about the calamities this guy didn’t have to think twice he donated his entire stock of blankets to the district collector. #KeralaFloodRelief pic.twitter.com/fcz7MTE5LL

2. A restaurant will donate all of its lunch-buffet revenues from Thursday through Saturday to assist people in Kerala.

Coconut Lagoon, an award-winning restaurant on St. Laurent Boulevard, is all set to donate its three-day revenues to those affected by the floods in Kerala. Its owner, Joe Thottungal, a native of Kerala said:

It’s never happened (as badly) so far, the mudslides and torrential rains and flooding.

Kerala Food Safety Commissioner MG Rajamanikyam, who is also the special officer dealing with Disaster Management, and Wayanad sub-collector NSK Umesh were seen unloading a truck at the relief camp of Wayanad.

People are lauding the two officers for swinging into action rather than just giving orders.

4. A rescue operation officer risked his own life to save a child’s life.

Kanhaiya Kumar, a rescue operation officer, ran across the submerged bridge with a child suffering from high fever. He had little time and didn’t mind braving the flood waters holding the child in his arms.

And this video I think defines the rescue efforts in Kerala. A rescue official runs with a child just as the water starts gushing over the Cheruthoni dam. pic.twitter.com/dbOMw5UYt2

5. Soldiers of the Madras Regiment rescued a 45 day-old infant from drowning.

A 45 days old infant being rescued by soldiers of 19th battalion Madras Regiment. The infant and mother have been shifted from their partially submerged house to a relief camp in Manjaly, Ernakulam. #KeralaFlood @adgpi pic.twitter.com/4qqFRNgtv7

7. This woman is arranging free drinking water for people in and around Kochi.

Arranging drinking water (well water) in tanker Lorry for free of cost in Kochi city and within 50 Kms during this Floodtime . If anyone requires please contact Gireesh: +917025603270#KeralaFloodRelief #KeralaFloods

8. Malayalam news channels are acting as helplines instead of broadcasting ads.

9. Indian Air Force is doing a commendable job in the transportation of relief material and Army personnel.

The Air Force is also airlifting those stranded in the flood.

10. Local fishermen are coming forward and helping the army in rescue operations.

About 130 fishermen have joined in the state police and the Indian Army in rescuing people stranded in the flood waters. They have even given their boats for the purpose.

Kochi-based siblings Harron and Diya broke open their piggy bank collection of Rs 2,210 to donate it to the Chief Minister’s distress relief fund.

12. A Madrasa in Kozhikode district of Kerala has turned itself into the largest relief camp.

This madrasa in Kozhikode district of Kerala is the largest relief camp in the district. Even in this cataclysm, humanity thrives in Kerala. We are together in this battle for survival. #KeralaFloods pic.twitter.com/QThJ1MsLXa

These actions are just a proof that there’s a little ray of hope even when there’s none.