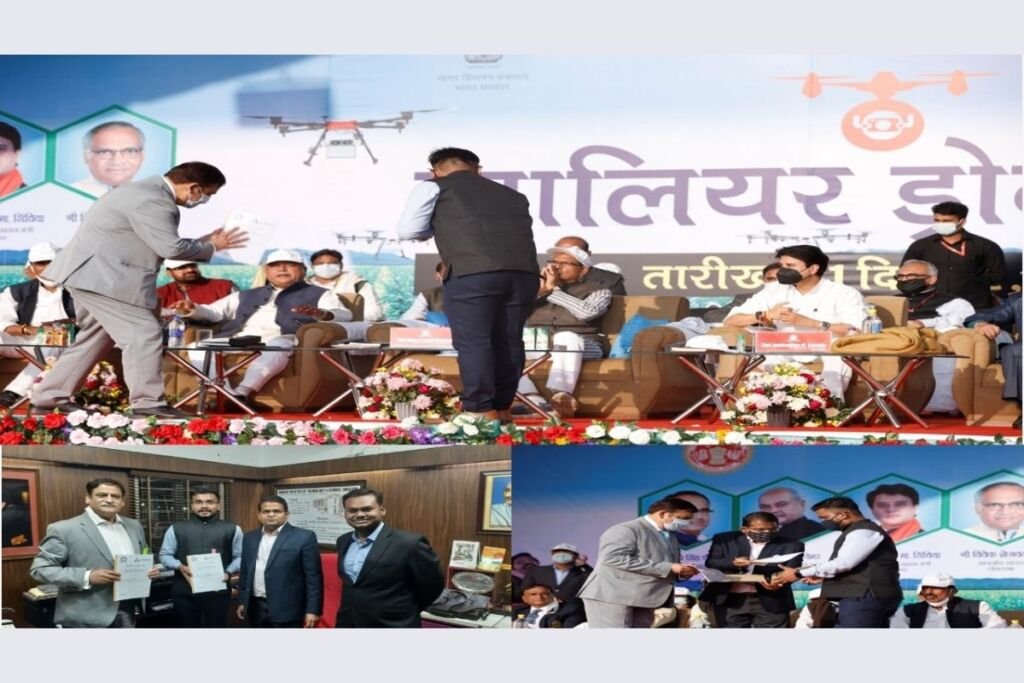 Gwalior (Madhya Pradesh) [India], January 4: IG Drones, India’s leading enterprise drone solution provider, signed an MoU with MITS Gwalior, one of the most reputed technological institutions of Madhya Pradesh. The MoU signing ceremony was held at the first drone fair of India – the grand ‘Gwalior Drone Mela’ organized by the Ministry of Civil Aviation in collaboration with the Federation of Indian Chambers of Commerce and Industries (FICCI) and MITS Gwalior.

Drones are undoubtedly the need of the hour. Gone are the days when the presence of powerful weapons used to define the technological prowess of a nation; now, it’s all about the advanced mini copters.

Addressing the youth present at the Drone Mela, MP Chief Minister said that Madhya Pradesh will soon be emerging as a leading state by using drone technology in the field of development and welfare.

Union Civil Aviation Minister Jyotiraditya Scindia said that drone technology has brought new opportunities for development for the youth. He also informed that five Drone Schools would be opened in Gwalior, Bhopal, Indore, Jabalpur and Satna. “Through these schools, training in drone technology will be given in order to generate more employment opportunities for them,” says Scindia.

India’s drone industry is catching up to that of other countries and gaining significant traction. According to 6Wresearch, the Indian UAV market is expected to develop at a CAGR of 18% in revenue from 2017 to 23.

IG Drones’ collaboration with MITS Gwalior marks a huge step ahead towards upskilling the youth. Under this collaboration, IG Drones will set up a Drone Center of Excellence at MITS Gwalior, where quality education related to Drone Technology will be imparted, preparing them for the future as India becomes the Drone Hub. This will not only make the youth self-sufficient but also ensure the rampant use of drones in every field, starting from designing projects to creating world-class infrastructure.

“Our association with IG Drones will be truly beneficial. It will not just enhance the technical knowledge and analytical mindset of our students, but will also play a pivotal role in the development of the entire Vindhyanchal region.” says the Director of MITS.

The Chief Executive Officer of IG Drones, Mr. Bodhisattva Sanghapriya, was also present in the program. “The Center of Excellence will be powered by a High-End workstation along with Industry Standard relevant software to give a firsthand experience of drone flying and field training with safety gears. We also aim at providing performance-based placement support to the students whose skills & expertise will help in the envisioned ecosystem,” says he.

Scindia rightly called the drone technology ‘revolutionary’ and stated that it was an ideal means to ‘turn poverty into prosperity.’

“Its Prime Minister Narendra Modi’s vision to promote the use of technology to bring change in the lives of the people. Hence, proving to be revolutionary in all aspects, drone technology’s usage must be promoted in every field from defence to agriculture to healthcare,” he said.

The Union Minister for Agriculture and Farmers Welfare Narendra Singh Tomar said that the drone technology is proving to be revolutionary for the farmers, giving a green signal to its usage in every field. The advent of the new technological era with the help of drones & setting up the first Drone CoE in the state of Madhya Pradesh will help the rural farmers in the entire Vindhyanchal region

IG Drones COE is present across India and doing revolutionary changes in the field of drone technology skilling and working towards the roadmap to make India the drone hub.

IG Drones COE – It is an educational arm of India’s leading drone enterprise solution provider, IG Drones headquarters at Delhi. IG Drones COE aims to train and upskill the youth for the future of drone technology to make them industry ready and empower India’s drone ecosystem with advanced drone technology. Creating a drone ecosystem, currently, it has been set up in different states in partnerships with various skill development wings & Academia’s. IG Drones has offices across 7 locations and has executed 220+ projects across 26+ states in India in 13 different industries.