Hunt Club, a senior talent recruiting platform powered by AI, today announced that it raised $40 million in a Series B round co-led by WestCap and Sator Grove. In an interview with TechCrunch, CEO Nick Cromydas said that the new capital will be put toward further developing the platform while growing Hunt Club’s national footprint.

Before starting Hunt Club, Cromydas ran New Coast Ventures, a venture studio headquartered in Chicago. While there, a friend of Cromydas’s — an executive recruiter — complained to Cromydas about challenges in the recruiting industry. After investigating the field, Cromydas says he noticed a trend of company founders allocating an outsized chunk of capital to hiring leadership talent — often with software that simply wasn’t up to the task.

“Traditional legacy recruitment firms rely on one recruiter’s book of business, limiting the geographic reach and diversity pool that they can reach through traditional recruiting tactics … Largely due to the fact that the industry still relies on an individual recruiter’s relationships, traditional firms risk losing a large portion of their candidate pool if a recruiter leaves the firm,” Cromydas told TechCrunch via email. “Hunt Club was born to improve the talent partner experience by combining referrals, network effects and technology to help their customers hire incredible talent.”

So how is Hunt Club differentiated from the other recruiting solutions out there? That’s a fair question. After all, it’s a crowded field, with startups like Workstream, Ashby and Circular.io putting their own unique spins on the recruitment process. Last year, Dover raised $20 million for its platform that helps recruiters juggle candidate pools to source suitable job candidates automatically. More recently, Kula, which automates tasks like sending introductory messages, landed $12 million in VC money.

What Hunt Club has going for it are three things, Cromydas says: an automated recruitment process, candidate-matching AI algorithms and a robust social graph. It’s a fully managed experience; Hunt Club acts like a recruitment firm, assigning a dedicated team to work with customers to understand the roles that they’re trying to fill. 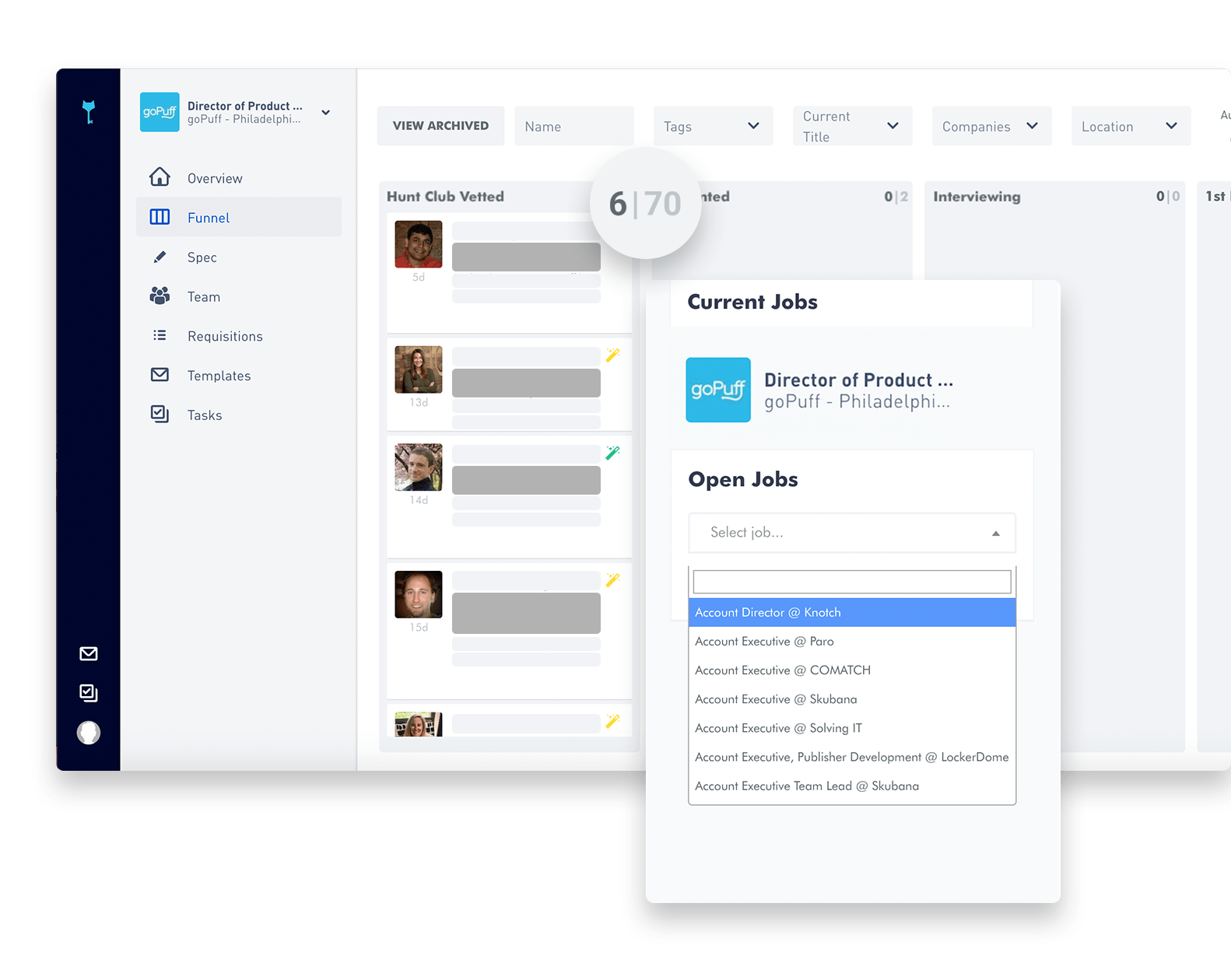 A screenshot of the Hunt Club recruiting dashboard, where candidates appear once they’re narrowed down by matching algorithms. Image Credits: Hunt Club

When a company kicks off a candidate search on the platform, Hunt Club scans an in-house database of over 7 million job seekers for matches and identifies contacts in the company’s network who know the best-fit candidates. The company’s matching algorithm attempts to understand the strength of relationships between candidates, analyzing data points on people and companies to put opportunities in front of between 80 and 100 prospective employees.

Hunt Club also automatically pings the aforementioned contacts, putting recruiters in touch with both them and the eligible candidates. Contacts in the network are drawn from a list of about 20,000 vetted business and industry experts, Cromydas says, who make warm introductions to senior-level talent that’d otherwise be hard to reach.

Over multiple screening rounds and introductions, Hunt Club whittles the initial crop of 80 to 100 candidates down to 5 to 7. Clients only see this final selection.

“Hunt Club’s technology aims to automate as much of the recruiting process as possible, such as candidate sourcing, funnel management, communications and scheduling,” Cromydas said. “The platform automatically enriches talent profiles with people and company data from over 20 sources, and builds custom workflows to engage them … By reducing the candidate volume — the majority of Hunt Club jobs are not posted on external job boards — and focusing on high-quality referrals and trusted network recruiting, Hunt Club sources the most relevant candidates with the highest propensity for cultural and skill fit.”

Hunt Club says that it’s worked with over 1,000 companies, including Gopuff, Upwork and Circle K, placing over 150 roles for Gopuff alone. Cromydas wouldn’t reveal detailed revenue figures, but said that revenue has grown 156% year-over-year from 2021 to 2022.

In the coming months, Cromydas says that Hunt Club will double down on product R&D, aiming to provide more granular insights about candidates to clients. The goal is to reach a $100 million run rate within the next 15 to 18 months as Hunt Club’s headcount surpasses 200 people.

“The pandemic has had a significant lasting impact on the way companies operate and the way that they hire — creating strong tailwinds for Hunt Club,” Cromydas said. “The recruiting landscape today spans from a group of legacy and relationship-driven firms on one side — Egon Zehnder, Korn Ferry and Russell Reynolds, among others — to tech-only driven platforms such as LinkedIn, Hired and Paro. Hunt Club has created a new category of executive talent search, filling an important gap in the middle where traditional and boutique recruiting firms have fallen behind.”