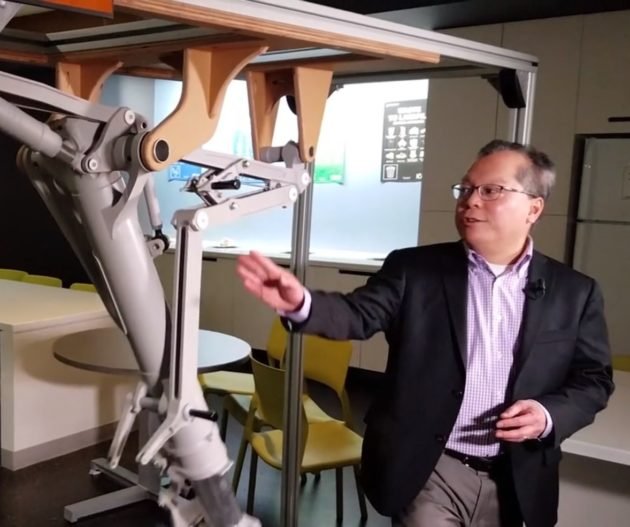 When Boeing’s customers said they wanted a stretched-out 737 MAX jet, there was one big problem: The 737’s landing gear was too short to handle it.

Fortunately, Boeing’s engineers came to the rescue, with a stretched-out landing gear to match the fuselage of what’s now known as the 737 MAX 10.

The way the engineers resolved the issue, well more than a year ago, is a testament to how Boeing uses technology to accommodate market demands, even if those demands seem unmeetable at first glance.

“We always like to look at how we can address market demand with the technology and engineering solutions that would be required,” Gary Hamatani, chief project engineer for Boeing’s 737 MAX program, told GeekWire this week.

Hamatani explained that the challenge had to do with simple geometry as well as the complex requirements for a new breed of 737 MAX.

To satisfy the needs of Boeing’s customers — and stay competitive with the jetmaker’s European archrival, Airbus — the fuselage had to be 66 inches longer than the MAX 9 fuselage. That would accommodate up to 188 passengers in a two-class layout, and up to 230 in a single-class layout.

Could it be done? “We had lots of constraints,” Hamatani said.

If the 737 MAX 9’s landing gear was used, the pilots would have to make a longer, more gentle takeoff than they were typically trained for. Otherwise, the tail would scrape the runway as the jet rose, like a car bottoming out when it hits a bump in the road.

That wasn’t an attractive solution, because the whole idea behind offering different variants of the 737 MAX — the 7, the 8, the 9 and now the 10 — was that pilots would be able to carry over their training from one variant to another.

Engineers shifted their attention to a hardware solution: lengthening the landing gear by 9 inches. But that plan raised another issue. The standard 737 MAX wheel wells wouldn’t be big enough to accommodate the longer landing gear.

That was a problem, because Boeing wanted to keep the design differences between the variants of the 737 MAX below 5 percent.

“Keeping that 95 percent commonality was one of the imperatives that soon became self-evident to us,” Hamatani said. “We couldn’t make a new airplane that broke that family tree of the MAX.”

To minimize the design changes, the engineering team simply added a spring-loaded lever to extend the telescoping landing gear, plus a “shrink link” mechanism that pulls the extension inward when it needs to be folded back up.

And to power the movement, the engineers took advantage of a retraction actuator that was already in the design for the other members of the 737 MAX family.

“We use the same part on the MAX 10,” Hamatani said. “That’s a pretty strong testament to how the team was able to creatively solve this problem, with the constraint of keeping it in the family.”

Half-scale, 3-D-printed models were used to validate the landing gear mechanism, and it’s included in the firm design configuration for the MAX 10.

Boeing’s engineering teams are now well into the detailed design process for the entire MAX 10. “Currently, we’re 70 percent complete on the engineering design release,” Hamatani said. “Long-lead production, in which the landing gear is included, has started.”

The Boeing-designed landing gear will be produced by one of the company’s longtime suppliers, UTC Aerospace Systems, headquartered in North Carolina.

Hamatani is already looking forward to the first 737 MAX 10 delivery in the 2020 time frame. And he’s looking back with pride at what Boeing’s engineers have done over the past couple of years to lay the groundwork for that milestone.

“They’ve just knocked it out of the park to date,” Hamatani said.