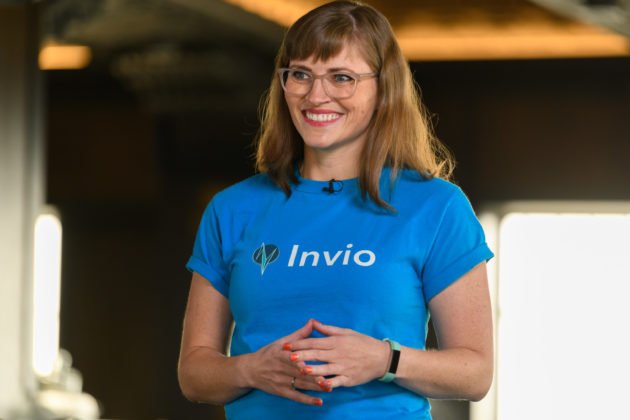 We’re back for another episode of GeekWire’s Elevator Pitch, a new show where entrepreneurs pitch their cutting-edge ideas.

In the latest episode, sponsored by Smartsheet, we travel to the iconic Smith Tower, which was constructed in 1914 and for decades held the title of the tallest building west of the Mississippi River. Our entrepreneurs get just 48 seconds to make their pitch as they head to the top of the Smith Tower.

Watch the fifth episode above, and vote on your favorite pitch below.

In today’s episode, we hear from three startup entrepreneurs who are building products in the health tech arena.

Our presenters are: Cassie Wallender, the co-founder and chief product officer at Invio, an enterprise software startup that helps speed up clinical trials at biotech and pharma companies; Michael Wasser, the CEO of BloomAPI, a three-year-old startup that streamlines health care communications; and Dr. Haneen Abu-Remaileh, the co-founder and CEO of Locumunity, a new marketplace to connect job-seeking physicians with opportunities at medical facilities.

Who do you think presented the best pitch?

Twenty seven entrepreneurs are competing in this unique startup pitch competition. But only one will truly make it to the top. Go here to watch past episodes.

Four more episodes will follow, and we’ll be back to showcase three new entrepreneurs as they rise to the top of the Smith Tower. In early October, winning entrepreneurs from past episodes will present live onstage in front of more than 900 business and tech leaders at the 2018 GeekWire Summit.

Longtime GeekWire readers may recall the original Elevator Pitch, since we launched a similar concept at the Space Needle back in 2012. This time, we’re back with a new crop of entrepreneurs and judges.

A big thanks to Smartsheet for sponsoring The Elevator Pitch. Also, thanks to Smith Tower, Stefan Scherperel and his video production team at Fueled Creative and GeekWire’s Cara Kuhlman and Stefania Hajnosz, who have assisted in the coordination of this series.

Thanks for watching, and be sure to subscribe to GeekWire’s YouTube channel to catch every episode, as well as our latest reports on what’s shaking in tech.