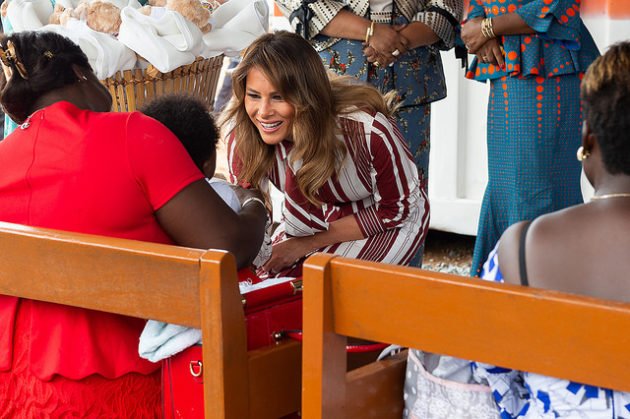 REDMOND, Wash. — Melania Trump is visiting Microsoft’s headquarters Monday as part of her “Be Best” campaign, promoting the well-being of children online and offline.

The first lady is stopping by the software giant to learn about its tools for online safety and accessibility. Microsoft employees plan to demonstrate for Trump Xbox’s parental controls and the Xbox Adaptive Controller, which is customizable for gamers with a wide range of abilities.

Trump is on a three-state tour tied to her Be Best campaign. She visited an elementary school in Tulsa, Okla., Monday morning before the Microsoft stop. On Tuesday, she’ll head to Las Vegas to participate in a town hall on the opioid crisis.

The goal of her campaign is to help children tackle the major issues of today with a focus on “well-being, social media use, and opioid abuse,” according to The White House.

Trump sparked controversy by announcing she would focus on cyberbullying as first lady. Her husband, President Donald Trump, has a habit of criticizing and name-calling adversaries on Twitter.

But Melania Trump charged ahead, formally unveiling her Be Best platform at an event in Washington, D.C., in early 2018. Executives from Microsoft, Amazon, Google, and other tech giants attended the launch event.

Monday’s visit is a continuation of a conversation between the first lady and Microsoft that began in July 2018. Trump visited Microsoft’s policy center in Washington, D.C., last summer to meet with students on the company’s Council for Digital Good, a small group of young people who provide ideas and feedback for Microsoft’s online safety work.

Online safety is an area of focus for Microsoft. In 2018, the company partnered with cyberbullying experts to host workshops at its retail stores throughout North America. Microsoft has a suite of tools to help families keep children safe online.

Stay tuned to GeekWire for updates from the First Lady’s visit to Microsoft.