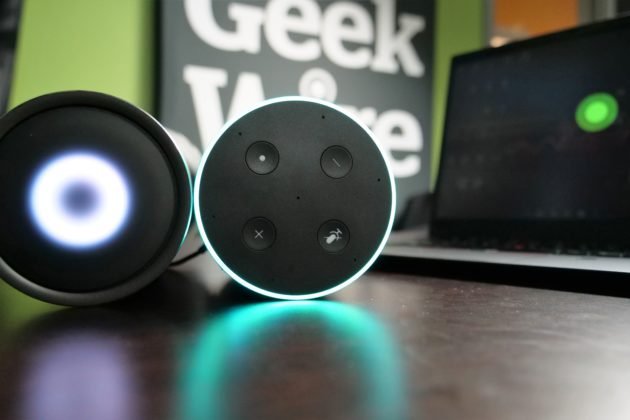 Just like that, we heard the famous theme song and voices of announcer Johnny Gilbert and host Alex Trebek on our Microsoft Cortana-powered Harman Kardon smart speaker, allowing us to play the audio version of the game show through a virtual portal to Amazon’s Alexa virtual assistant.

This ability for Cortana to access many of Alexa’s third-party skills is one of the most promising aspects of the integration between the virtual assistants, which debuted this week as a public preview. If skills are the equivalent of apps, Amazon has effectively given away the store to Microsoft through this new partnership.

Alexa also benefits from the integration. Going the other direction, on our Amazon Echo Spot, we were able to ask Alexa to open Cortana to read our Outlook.com emails and talk us through the next appointments on our calendar.

But when we tried to play our Alexa Flash Briefing through a Microsoft-powered device, we were disappointed.

“Sorry, this devices does not support Flash Briefing,” Alexa responded on a Cortana-enabled Windows PC. “What else can I help you with?”

Those are some of the experiences we’ve had in our initial testing of the new integration of Alexa and Cortana. It’s been nearly a year in the making, but the promise of the digital assistant detente between cross-town rivals Amazon and Microsoft is finally here, and we’ve been trying out a variety of scenarios at home and in the office since the preview was released on Wednesday.

Amazon Alexa is now available on Windows 10 PCs as well as Cortana-enabled Harman Kardon Invoke speakers, while Cortana works on Amazon Echo devices. It’s important to remember that this is just Day One, as Amazon likes to say  — or actually day three, to be completely accurate — of what both companies say will become a much deeper partnership. The integrations between the two digital assistants are limited to start but give a hint of what could come someday.

Before embarking on any major tech adventure there’s one important hurdle to clear: the set-up.

For us, things kicked off well, but we quickly got caught in a rather humorous Cortana loop when we tried to use the Microsoft assistant on an Echo Spot in close proximity to a Windows PC.

We also hit a roadblock when initially trying to enable Alexa on the Invoke speaker. Pro tip: you must first sign in to your Amazon account on your phone or PC and enable the Cortana skill if you’re using one of these Cortana-enabled speakers.

Here are a few of our initial observations of the experience:

In some ways, it feels like this integration has begun from the outside in. Cortana-powered devices get access to a lot of the third-party skills that make Alexa stand out, but not some of the core features you’d expect to be a crucial part of the first integrations. Alexa devices become more productive with the addition of several important business capabilities, but a lot of those skills seem redundant with existing Alexa features such as the ability to access calendars from Office 365 and other services.

In this stage of the partnership, it seems like the people who would benefit most are heavy users of Microsoft products who also have an Echo speaker. Cortana’s ability to read emails and other business skills come into play here, as they add some pretty important capabilities to the market-leading smart speaker. Invoke speakers owners are also big winners, since they are getting a digital assistant double-feature with addition of Alexa, making their speaker a lot smarter.

If we had to grade the earliest iteration of this partnership, it would be incomplete, since the companies are just getting started. The smart speaker and digital assistant markets themselves are in their infancy. And there are still a lot of things to smooth out as digital assistants learn to talk with each other and leverage each other’s skills.

Microsoft and Amazon acknowledge that this is just the start, which is why they rolled out the integration as a preview, asking for feedback. At this point, given the effort of set-up, the clunky commands and a limited set of integrations, we probably won’t make much use of Alexa via Cortana, or Cortana via Alexa.

However, it’s clear that this could be an important first step for the digital assistant market, potentially reshaping how we interact with these new voices in our lives.