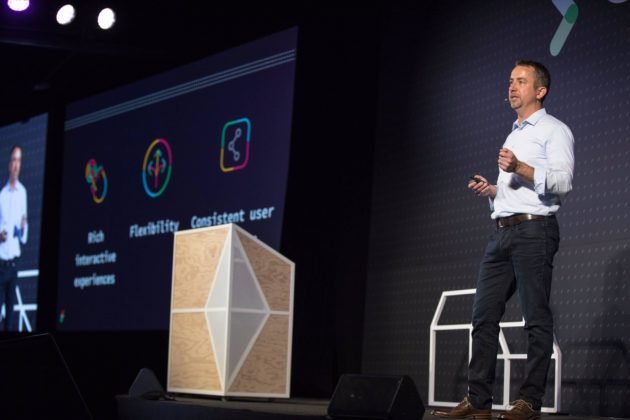 Slack is facing plenty of competition from some of the biggest tech companies on earth. In fact, Microsoft just recognized Slack as a competitor in its annual regulatory filing. But one of Slack’s newest executives doesn’t seem too concerned about the challenge.

Brian Elliott, general manager of Slack Platform, says the company is focused on the concept of a “collaboration hub” — a single place where staff gets work done virtually. And unlike some of its top competitors, most notably Microsoft and its Teams productivity tool, Slack is focused on its one major offering, and that’s it.

One thing that does rile up Elliott is the insinuation that Slack is just a chat app.

“I think that people still don’t get the fact that at the base we are a collaboration hub,” Elliott said. “I think it still gets pigeonholed too much as a chat tool, where people think about it as the chat app between me and a couple other people on my team. If you talk to people who are heavy Slack users and see what they do, you get that it’s actually a primary way in which people get their work done.”

Elliott sat down with GeekWire during a recent trip to Seattle, where he said the company won’t be opening an office any time soon. Elliott joined Slack last December. He said he was attracted to the company because he loves the product, and the prospect of making the work day easier for people is his idea of “living the dream”.

He came from Google, where he spent four years working on projects such as Google Express. Today, he oversees the team that builds third-party integrations with Slack.

Slack has more than 1,500 third-party integrations, including tie-ins with tech giants like Concur and Salesforce as well as offerings from competitors like Microsoft’s OneDrive and Google’s G Suite. Elliott believes Slack offers the best developer tools and deeper integrations with more apps and services than the competition, enabling it to offer a platform open to everyone, including its rivals.

“Our job is to make it easy and seamless for people to integrate all of those and have it feel relatively native to the experience,” Elliott said.

One of the best examples of seamless third-party integration, according to Elliott, is Concur. Concur is the Bellevue, Wash.-based expense management platform that was acquired by SAP in 2014 for $8.3 billion.

Elliott says to approve an expense report he used to get an email, and then he would have to click a link and find the right tab to approve. With the Slack integration, Elliott says he gets a notification with three simple commands: approve, deny or get more context within Concur.

Making actions like this easier is a small thing on its own, but a couple minutes saved here and there really adds up, Elliott argues.

“Think about all the different things you do like that,” Elliott said. “If you save five to 10 minutes a day, assume that happens with notifications 10 times a day, every day of the year. That’s a huge productivity gain.”

Slack today has more than 1,000 employees working out of 10 offices in eight countries around the world. It has raised $841 million in its history, including a $250 million round last year that put the company’s valuation at more than $5 billion.

Slack boasts 8 million daily active users as of May, 3 million of which are paid. The company says more than 500,000 organizations use its product — compared to 200,000 for Microsoft Teams — and 65 percent of Fortune 100 companies are Slack users.

Microsoft Teams turned up the heat on Slack last month when it introduced a free version, expanding the reach of its self-described “hub for teamwork” beyond the Office 365 ecosystem. Microsoft made its Slack challenge clear by offering a side-by-side comparison of features between the two products, boasting about Teams’ superior search capabilities and greater language availability. Microsoft has the long-term advantage of being able to offer Teams to its base of more than 135 million Office 365 business users.

Slack doesn’t appear worried about the challenge, going all the way back to when Microsoft Teams launched and Slack took out a newspaper ad to congratulate its new competitor and offer a few pieces of advice. Elliott is confident that all the third-party integrations and other features make Slack stand out from its rivals.