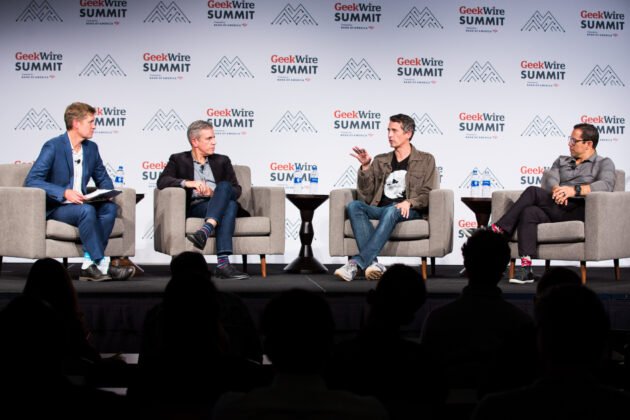 Manny Medina may be the head of a billion-dollar startup, but when asked what mythical creature represents the company, it’s not a unicorn — it’s the mythical flying horse Pegasus.

“The moment Pegasus was born, he flew into thunder and lightning without any fear,” said Medina, the CEO of sales automation platform Outreach, at the 2019 GeekWire Summit. “As a leader, that’s my nature and the nature of the company as a whole. We run into fires. And we invite others to run into fires with us.”

Medina spoke alongside fellow Seattle-based “unicorn” leaders Dan Lewis, CEO of Convoy, and Eugenio Pace, CEO of Auth0. In a wide-ranging discussion, the executives shared their views on how to build teams, find your values, and scale a company.

For Pace, attracting the best talent goes hand in hand with having a mission that is understandable and resonates with people. “[The mission] has to be meaningful, even if it’s at a small scale, from the very beginning,” said Pace, whose company runs an identity and authentication platform.

That doesn’t mean the mission is easy. Pace recalled the famous — and apocryphal — advertisement by explorer Ernest Shackleton that sought people for a mission that involved a “hazardous journey, small wages, bitter cold … honor and recognition in case of success.”

Lewis echoed this sentiment. “You have to recognize that when you’re creating a new company, it’s a journey. And the people that you want to attract are excited not just about the job that they get to do, but about the story that they get to be part of,” he said.

At Convoy, that mission comes down to reducing waste and emissions in the trucking industry while improving wages and lifestyle of truckers.

How to grow (without breaking things)

For the CEOs, the old tech mantra of moving fast and breaking things doesn’t resonate.

When Outreach hit its first phase of rapid growth, Medina said his greatest fear was what the company might do to break the product. “We sell to enterprise [companies],” he said. “I can’t break things.”

“You need to deliver on the promises you make,” Medina added.

Lewis worries that as companies grow, the share of people who want to “shake the world up” naturally shrinks. To keep the startup energy alive, he seeks out people who can “scale themselves” by hiring the right people.

“You have to learn how to both scale, find the right people who can scale, but create an environment where you don’t lose the ability to take risks and knock down walls. Otherwise, you’ll end up stagnating,” he said.

No high-flying startup is complete without a defined set of values, and Seattle’s latest crop of unicorns is no exception.

After an initially unsuccessful attempt to define Auth0’s values, Pace said his company tried again and honed in on three things that really mattered to his company:

The notion of “having your back” has become a core value for Outreach.

“Having your back is a value that allows us to go out there and be … at the edge of the company’s abilities, fail, and feel like the company has you, your team has your back,” Medina said. “It allows us to actually deliver on the promise of innovation and moving fast.”

At Convoy, the company instills in its employees a desire to “know why.”

“It’s never okay to do something just because somebody says,” Lewis said. “You have to know the context.”