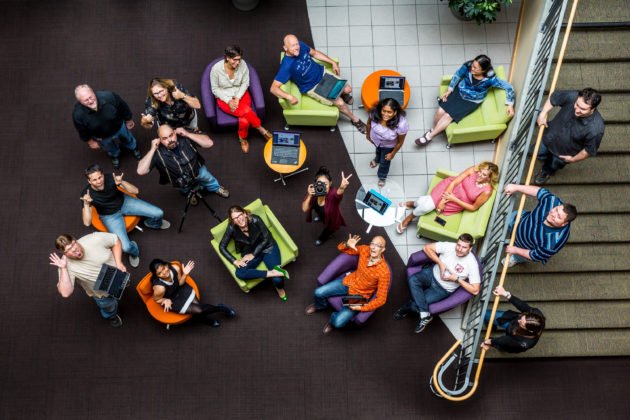 The idea of a hackathon at any company is to harness the energy and creativity of employees to find new solutions to problems and potentially new products for consumers. As it opens its One Week Hackathon Monday morning, Microsoft is releasing something new and inspiring — a book chronicling tech projects aimed at accessibility which originated as hacks.

“The Ability Hacks” shares the stories of two Microsoft teams whose innovative ideas turned into solutions used today around the world by people with disabilities.

The Ability Eye Gaze hack team developed what would become Eye Control in Windows 10. Inspired in 2014 by the story and needs of former NFL player Steve Gleason, who was living with the neuromuscular disease amyotrophic lateral sclerosis (ALS), the team came up with the Eye Gaze Wheelchair. It allowed Gleason to operate his wheelchair with only the movement of his eyes as he looked at controls on his Surface.

Among over 3,000 projects from teams across the company, judges and Microsoft CEO Satya Nadella named the Eye Gaze Wheelchair the grand prize winner of the 2014 hackathon.

The following year, the Learning Tools Hack team bested hundreds of other teams and thousands of hackers with a solution which led to Learning Tools in OneNote, Word, Outlook and Edge. The free tools are designed to help people improve reading, writing and comprehension regardless of age or ability.

“The Ability Hacks” was written by Greg Shaw, who co-authored Nadella’s “Hit Refresh,” and includes a foreword by Corporate Vice President Peter Lee and an afterword by Chief Accessibility Officer Jenny Lay-Flurrie. The work, the book, and this week are all especially important to Lay-Flurrie as Microsoft continues to exhibit its commitment to accessibility and inclusion.

“It still is probably the best week of my career here. It’s the most fun,” Lay-Flurrie told GeekWire. “I’m sitting here right now, knowing that I’m walking in [Monday] with at least 130 hacks for the ability hack, so probably 800-1,000 folks working on disability. I think it’s just been a brilliant focus on humans, in so many ways. It just allows folks to wallow in problems or solutions or how to weave technologies together that are going to have a real human impact, and I think that that’s what grounds people to it.”

Lay-Flurrie is especially proud of what was achieved by the Eye Gaze team four years ago. She recalled having nine projects and about 75 people lined up with a focus on ability hacks. Then the email landed from Gleason and there was a 10th project.

This week there will be teams across divisions at Microsoft traversing roles, disciplines, geographic boundaries and time zones. Lay-Flurrie said the projects which bring people with disabilities and their perspective in right from the inception of the idea are the ones that will be successful. And the new book gets that by sharing stories which embodied that understanding.

“These two hacks are kind of gold dust to hackers,” Lay-Flurrie. “People are always curious on those stories, so we’re hoping by just sharing it will promote more — not just ability hacks, which selfishly I want to see — but more people hacking, innovating, taking an idea that they think might be slightly bonkers and seeing what they can do to make it a reality.”

And while creating an eventual product for the software giant — the Xbox adaptive controller was a hack — is certainly a nice goal to set, the benefit that the hackathon has on the culture of Microsoft is especially relevant.

“The inaccessible hack is whack” read big stickers on white boards near desks last year. Simple descriptions encouraged people to make accessible hacks, accessible videos, accessible content. The language teams are using is closely examined. And teams and individuals are married together to take advantage of common interests and to harness the value they can get from one another.

“I see a massive cultural and educational and networking benefit that’s so rich with these hack projects where people walk away with baseline understanding of disability, if nothing else — and accessibility,” Lay-Flurrie said. “For me it’s a win win. Even if we don’t get that beautiful genius project that I know is going to revolutionize an area, I see folks walking back to their areas, whether it’s developer or marketer, with enriched knowledge of inclusion and how to take that forward.”

Long days and sleepless nights are the norm for teams working around the world this week. Tents set up on Microsoft’s Redmond, Wash., campus have signs that read, “Hack now, sleep later.”

Hackathon is nearly upon us! Tents are getting tables and chairs. Get your sleep people, next week is gonna be a hacky week! #hackathon #abilityhack #happydance pic.twitter.com/BDwH5ftQ5J

Last year, a large percentage of the hacks relied on artificial intelligence, machine learning and the huge database infrastructure that employees have access to. Lay-Flurrie won’t be surprised this week if there’s a ton more of that. She also had her eye on other buzzworthy stuff in the days ahead of the hackathon.

“I’m a musician in a past life. I would never claim to be good any more, but there are folks coming in who want to see what they can do with technology and music and I can’t wait to dig into those,” she said. “The Eye Gaze team has got some fun stuff, to the point that they’ve asked me if I’ve got a kayak they can borrow. I have no idea where that’s gonna go, but I will be bringing in a kayak to see what they do with it.

“The Ability Hacks” is also available on PDF and EPUB