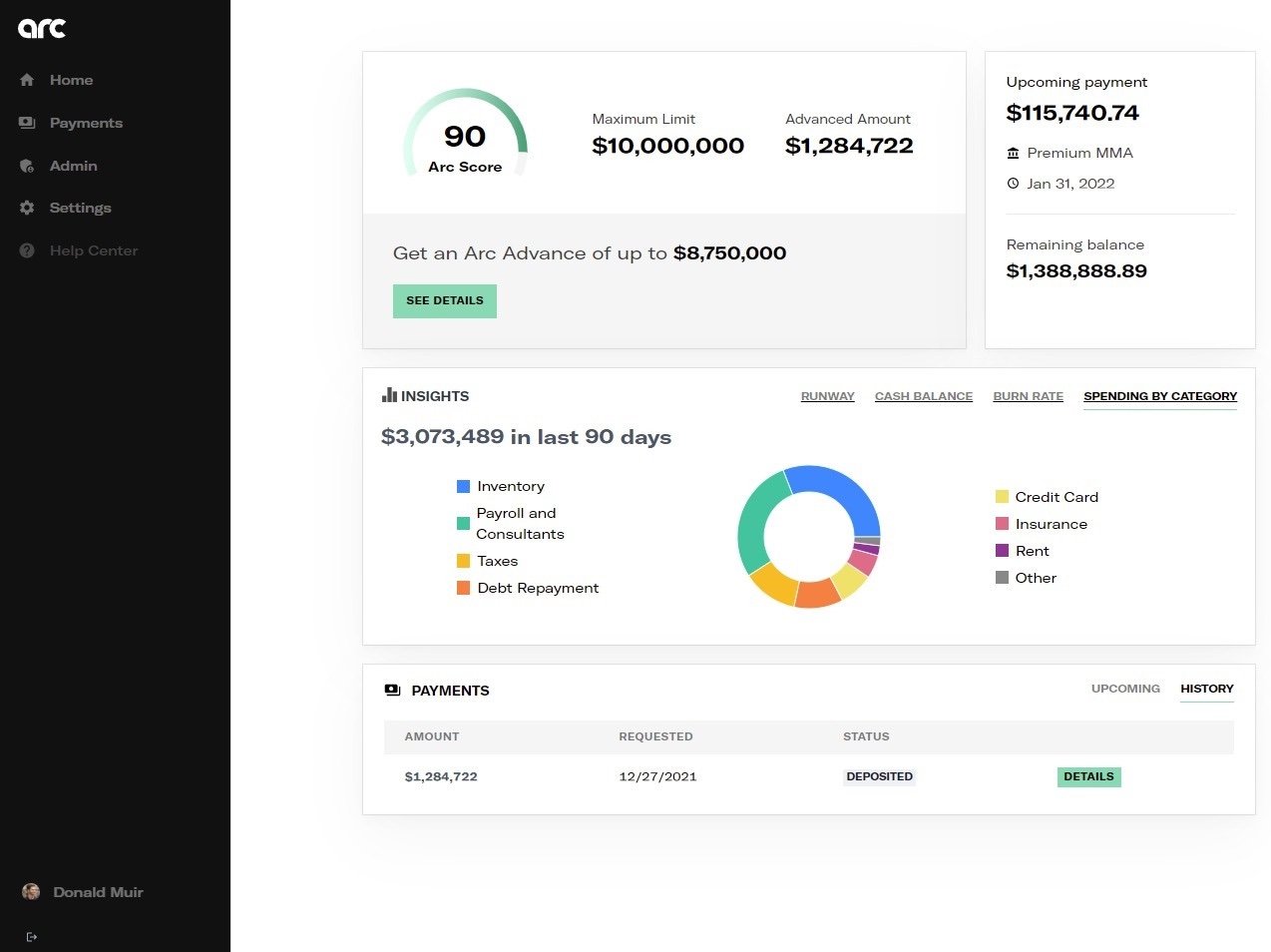 There’s financial technology (fintech) companies out there targeting all sorts of different segments of the population, as well as companies at various stages of growth.

Coming out of stealth today with $150 million in debt financing and $11 million in seed funding, Arc is building what it describes as “a community of premium software companies” that gives SaaS startups a way to borrow, save and spend “all on a single tech platform.” And it’s doing it as part of a partnership with Stripe, one of the world’s largest, and most valuable private fintechs.

Put simply, Arc wants to help SaaS companies grow through alternative financing methods so that they don’t have to turn to venture capitalists to fund growth at the price of diluting their ownership. Those same founders can also avoid the “restrictive covenants, guarantees, and insolvency risk associated with raising debt” if they use Arc, CEO and co-founder Don Muir said.

“Early-stage SaaS startups face the infamous cash-for-growth tradeoff — they are the most in need of funding yet are also in their most vulnerable state to raise capital in that they experience the highest dilution for each dollar raised,” Muir said. “This is exacerbated by the timing mismatch between monthly cash receipts from subscription software revenues and the upfront capital outlay to acquire new customers.”

Muir, Nick Lombardo (president) and Raven Jiang (CTO) founded Arc in January of 2021 and incorporated the company in April. The trio founded Arc out of Muir’s living room in Menlo Park during their last year at the Stanford Graduate School of Business when the campus had gone into lockdown due to the COVID-19 pandemic. Prior to business school, Lombardo and Muir worked in private equity and investment banking in New York, collectively raising tens of billions of dollars of capital to finance mature, late-stage companies. It was during that time, Muir says, the pair experienced firsthand the shortcomings of traditional capital raising — namely, the “slow, offline, and transactional nature” of the deal process.

“An army of investment bankers, credit analysts and lawyers will spend months toiling in data rooms and building static models in Excel to close a financing transaction that ultimately costs a company millions of dollars, before taking into account the opportunity cost of management’s time,” Muir said.

After meeting at Stanford, the trio came up with the concept behind Arc and then teamed up with Y Combinator to meet with hundreds of software founders in the San Francisco Bay Area. Arc was an early member of YC’s Winter 2022 batch, which commenced earlier this week.

“We quickly realized that they shared a common pain point — startup funding is costly and distracting. Even in a zero interest rate environment, dilution is extraordinarily expensive for startup founders. At the same time, offline and bureaucratic banks with outdated underwriting policies and limited bandwidth are structurally unable to serve earlier-stage opportunities,” Muir explained. “Even premium recurring revenue software startups are neglected by traditional lenders. We founded Arc to give founders an alternative to the status quo. We’re on a mission to help startups grow — with technology and without dilution.”

Since the company launched its introductory product — Arc Advance — last summer, more than 100 startups have signed up for the Arc platform. To date, the majority of its customers have been VC-backed B2B SaaS companies seeking to accelerate their growth spend while also prolonging their runway before raising additional equity. So far, VCs have been a strong customer acquisition channel for Arc, noted Lombardo, who pointed to the fact that Arc’s largest partnership today is with Y Combinator, which is promoting Arc across its portfolio of thousands of software companies. Arc is also partnering with traditional capital providers, including VCs, banks and venture debt lenders. In fact, a large portion of its customers are VC-backed and seek capital from Arc “as an efficient way to smooth funding needs between episodic VC rounds,” Lombardo told TechCrunch. “

For example, he said, “A Series A SaaS company is raising $1 million each quarter from Arc before its Series B late this year in order to accelerate spend — driving outsized headcount and revenue growth and resulting in a higher Series B valuation. In this example, the Series A investor also benefits financially from the reduced dilution and higher valuation that Arc’s capital unlocks.”

Also among Arc’s customers are bootstrapped companies outside of Silicon Valley, Lombardo added.

In coming months, the startup plans to release “a full suite” of financial tools designed “to empower SaaS founders to scale their businesses efficiently and retain control.”

How it’s different and the same

Arc differs from traditional financial institutions that might deploy an army of analysts to manually underwrite transactions, its founders say, in that it uses technology to algorithmically price the risk inherent in startup financing.

More specifically, the company is running backend API integrations from companies like Plaid so that it can underwrite credit risk through real-time access to a startup’s financial data. It’s using machine learning “to drastically improve interpretation of the financial information it receives compared to manual analysis alone.” And finally, by leveraging Stripe’s banking-as-a-service technology, Arc’s customers can store and spend their funding from Arc “on a single platform designed for software companies,” the startup says. 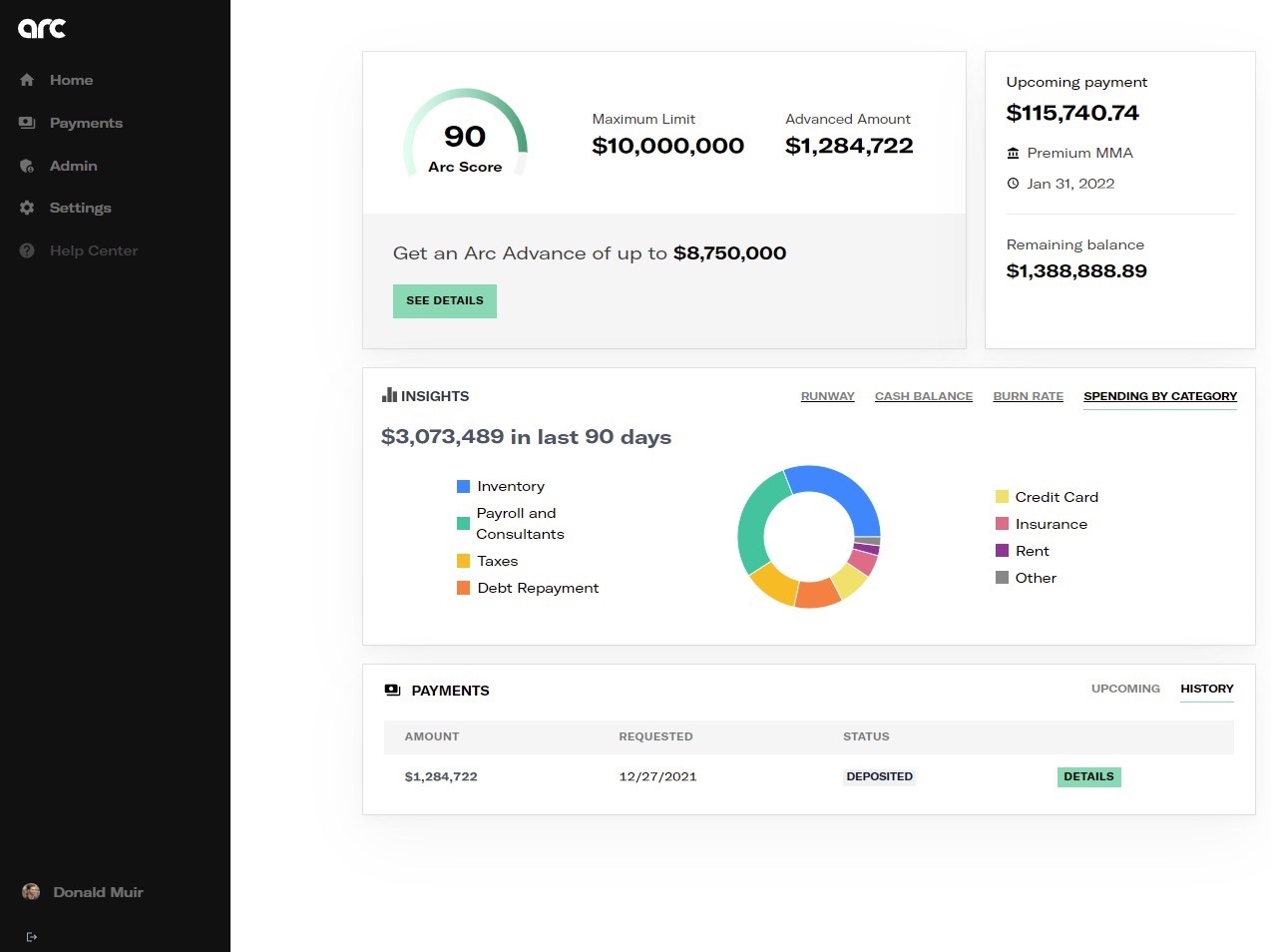 To be clear, Arc is not the first company to want to help SaaS companies grow without dilution. Buzzy fintech Pipe was founded in September 2019 with the mission of giving SaaS companies a way to get their revenue upfront by pairing them with investors on a marketplace that pays a discounted rate for the annual value of those contracts. (Pipe describes its buy-side participants as “a vetted group of financial institutions and banks.”) The goal of that platform is to offer companies with recurring revenue streams access to capital so they don’t dilute their ownership by accepting external capital or get forced to take out loans.

One thing that Arc and Pipe have in common? Both allow founders to borrow against the future revenue of their company to grow without diluting their capital.

For its part, Arc emphasizes that its model is different from competitors even if missions might be similar.

“We aren’t a marketplace where we sell customer contracts on a Bloomberg Terminal-like platform. Instead, we build a more comprehensive relationship with our customers to help them grow over the long term,” the company says. “This approach lends to a recurring and full-service relationship with customers instead of an episodic financial transaction. It also enables Arc to be more flexible on terms and more hands on with customers. Arc backs SaaS founders for the long term and is building a vertically integrated product suite to serve their finance needs, end-to-end.”

“Whereas competitors have prioritized horizontal expansion, Arc has doubled down on SaaS,” he told TechCrunch. “Our vertical focus allows Arc to serve the unique working capital needs and predictable, recurring revenue attributes of this premium customer profile.”

This vertical industry focus also presents a SaaS startup with “a unique opportunity to generate network effects” with other SaaS companies through offerings that “benefit all members,” including financial benchmarking insights and community deals, Muir said.

NFX founder James Currier, who led the fund’s investment in Arc, has joined the startup’s board of directors in conjunction with the financing.

Y Combinator General Partner Jared Friedman likens Arc to more mature fintechs such as Stripe and Brex, saying that the company “has created a fintech product with mass appeal for startups.”

And that appeal was another draw for NFX.

“Arc’s vertical focus in SaaS prioritizes the SaaS founder rather than the buy-side investor and lets them build network effects into their software to benefit community members,” Currier said.

Over the last six months, Arc has grown the team from three co-founders to 15 employees, including senior software engineers coming from Google and LinkedIn, and finance and strategy folks hailing from Brex, Silicon Valley Bank and BCG. The company plans to double the team size in the first quarter of 2022, with a focus on engineering, data science, underwriting and sales.