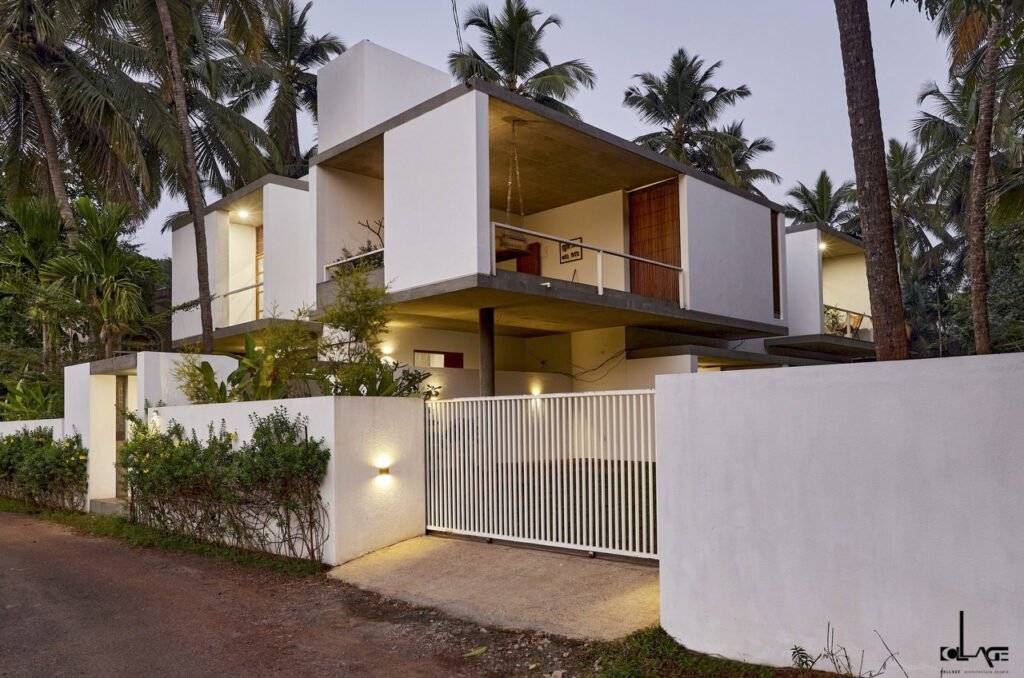 Aayi House is the Marathi term for mother. Aayi is an attempt to create a timeless-looking Goan home, built as a tribute to the client’s parents. The project embodies the brief of being contemporary and minimalistic while being in harmony with the countryside context of the site. The site is a corner plot bound by a village road on one side and a main road on the other wherein nestled in the top left corner of the plot, amidst a lush clump of coconut trees, lies the development.

The house is a South-West facing structure with a building on the North on the neighboring property and one on the East, within the property. Aayi sits effortlessly on a fourth of the lush green farmland with its clean design weaving beautifully into its surroundings.

While one axis is bound by courts, the other begins at the double-heighted central court, from the stairwell, and flows into the similarly double-heighted living space, finally opening onto a deck that introduces us to the garden.

This double-height living space along with the central court seems to form the heart of the home, connected to all the spaces and being an extension to the living room, becoming a multi-purpose gathering area for the inhabitants.

The upper level is more private with two juxtaposed bedrooms, connected by a bridge overlooking the gathering space below and flanked on either side by the family lounge and the covered terrace-cum-bar area. The roof is twice crowned with self-rotating exhaust turbines to create a stack effect, allowing hot air to escape and keeping the internal ecosystem cool. Similarly, the rooms have been outfitted with French windows topped by louvers to also facilitate ventilation.

Since the site faces South-West, we have adorned the structure with sprawling overhung verandahs, including interjecting pockets of landscape to create spaces that are breathable and breezy while also protecting the inhabitants from the torrid sun.

Further, to harmonize the structure with the buildings it is straddled by, we have played with skylit courts to create an internal micro-climate while also maintaining privacy. One of the courts forms the central node of the structure while sitting on two perpendicular axes that run through the entire space laterally thereby creating a sense of fluidity and interconnectedness on the inside while melding effortlessly with the outside.

The house is a two-storied structure with the ground floor comprising three courts which represent a marriage of tradition with contemporary design. The entrance begins with the warm embrace of a traditional Tulsi court leading onto the central court which is a double-height space with a connecting bridge on the upper level, whereas the third court is a brush with nature and a more private space comprising a water body. These three courts, running along one axis, represent a transitivity of spaces through the house as it opens up towards the center and narrows at the ends.

Apart from the clean spatial design which embodies passive-cooling techniques, we have delved into minute nuances of creative inspiration like the acrylic tubes on the roof to allow for perforated intermittence of light reminiscent of stars.

Aayi is a personification of our mothers, with her many shades – the pastel interiors and the warm wooden furniture melding with the versatile whites and greys, which then speak to the green landscape, creating a visual sense of completeness.