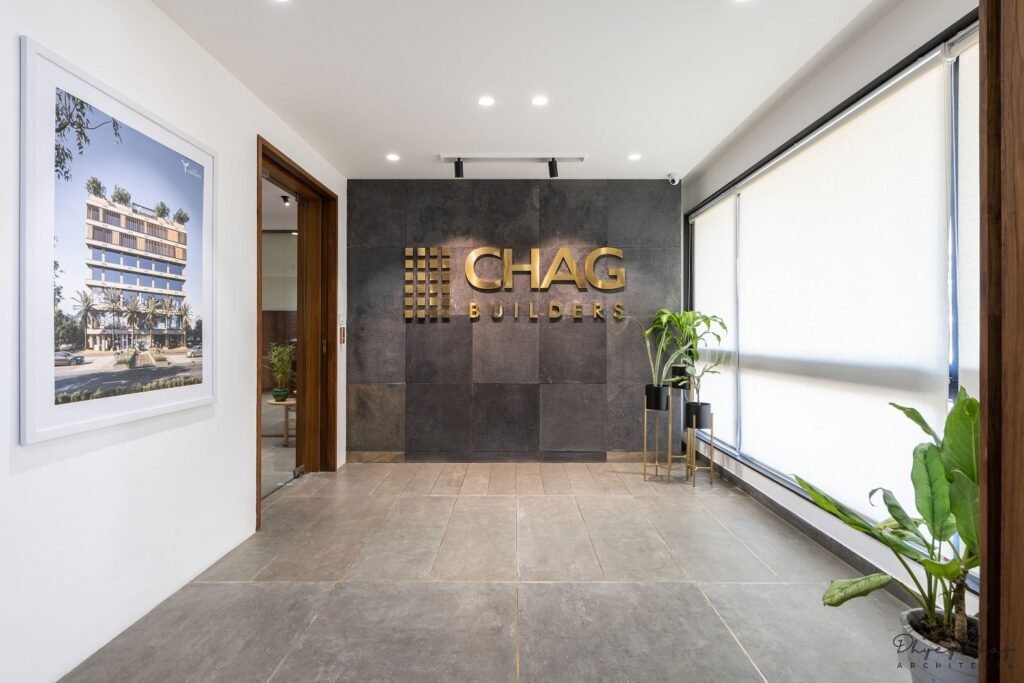 The brief was to design workspaces with the idea of thresholds that mediated movement from one type of spatial status to another such that they seem isolated spatially but they remained visually connected. We also wanted the material palette to be simple and timeless which would blend well with the customized furniture describing the client’s intent and business.

As the project was being built in Jamnagar, a small town situated in the western part of India, the major issue that we were faced with was material procurement. Another challenge was to locate skilled laborers who could work with those materials. Instead, we brought on board some native craftsmen and this collaboration resulted in the exclusivity of certain elements of our furniture design. The cupboards also have embroidered cloth with a protective finish which balanced out the monotonous blend of our textured materials.

The entire office is designed completely as per Vastu (Indian Traditional technique of architecture and placement) as it was one of the major requirements of the client. The entrance foyer is defined by a wall with Kadappa stone, the wall is placed adjacent to the window in such a way that the light highlights the inherent texture of the stone and it further guides one to the reception hallway which introduces office through its stark material palette and glass at places that defines certain areas visually.

The fluted wood panel on the wall opens towards the main chamber that has a long Grey table and a lounge area with a contrasting Blue wall breaking all the monotony alongside a dark flooring that handles major footfall and dealings. The conference room with a cast in situ table and exposed brick wall gives an idea of being in a raw, builder’s space, and this appeal is purely for aesthetics. The accounts office has a cornered glass which lets you have a peek into the entire office and shows for a small staff work desk that opens up in the hallway.

The entire office space has two openings for light ventilation, one at the entrance and the main chamber while the other is exactly opposite to its opening in the In- House Chartered Accountant’s chamber.  This chamber is designed in a very subtle material palette with a hue of blue on one wall alongside sleek furniture in it. The corner of this office is dedicated to the In-House Architect’s Studio (Dhyey Chag Architects) which has a bold blue flooring but subdued hues of fabric on furniture reflecting the beautiful blend of native craft with a minimalist approach in design through wooden hues infusion with brass.

Material selection played the most important role in the entire design where we have used the materials that are raw and most commonly seen while a project is in the construction stage, keeping the intent of the business of the client into consideration. We used Kadappa stone on the entrance display board along with brass inlay in grey-toned tiles. We have used exposed brick, steel, wood, RCC in furniture and on walls such that it compliments as a material and texture palette. We’ve used blue color as a complementary feature in order to balance out the muted tones of greys and textures.

The primary focus for us was to fulfill the spatial requirements but at the same time, we wanted the spaces to interact with each other unlike in a typical office setting which separates departments very boldly. Since this was a builder’s office, we wanted that to reflect in furniture pieces as well, it spoke of their value and culture. Every furniture piece was customized fully and was raw in its live view.

It was a challenge as to how values could be developed and transformed into objects but after understanding the user, the inspiration became an industrial setting most often sighted by the clients.