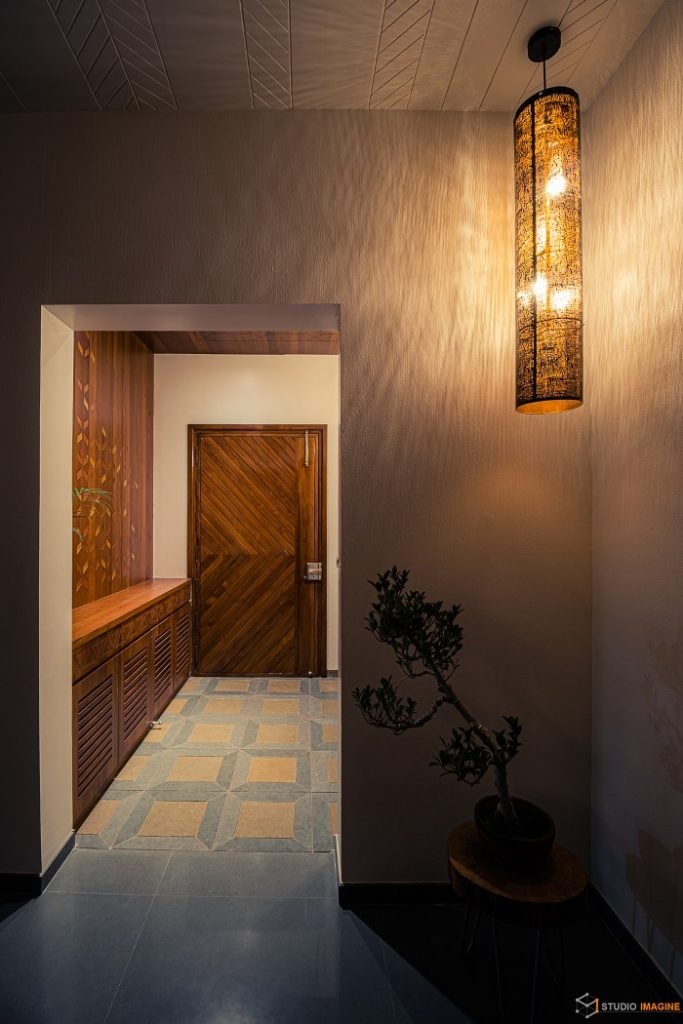 Indian Traditional materials were opted for this blissful home with its offbeat characteristics- in line with its contemporary designing! Apart from these pre-requisites, the client insisted on imposing the traditional Vaastu principles for his dream abode. The Vadodara based firm, Studio Imagine, proudly delivered this Vaastu home that is epically serene and eternal. No wonder they named it ‘Shubhani’. The guiding principles demanded margins along all sides of the plot which in turn, aided this functional unit with its breezy and vibrant vibes- permitting the goodness of nature to seep in. Wider front greens and a lavish covered parking space accentuate this dwelling with the much-needed amenities.

The house opens along the north-westside into a vestibule to encounter a prolific wooden detailing. A space that immediately instills a sense of transition from outdoors to indoors get crafted here. Apart from the heartful wooden detailing, a yellow Kota stone gets inlaid with the green leather finished Kota stone in repetition for the floor.This foreshows the Indian touch that the house is fused with thoroughly.

The living space is a unique fusion of a present-day setup establishing a modern appeal with its traditional elemental detailing and furnishing. The open play layout structures visual connection across all the adjoining spaces- dining, puja, and kitchen- adhering a sense of oneness in this spacious expanse. The highlighter TV wall is paneled with sober wood to spread itself to the ceiling, dominating the space with its rawness. It attains its expressive persona with the amalgamation of rough-cut teak wood and veneer sheets.

A fulfilling turquoise for the sofa adds unique tranquility here. What acts as a cynosure is the wooden Jullah with traditional brass hangings and the teak wood composition on the wall justifying the concept of the design. Although, the chief element of the design is the irreplaceable natural light that plays along with these spaces.

The dining is yet another richly designed space with an adequate room for the natural light to play its part. The floor varies from the other spaces to demarcate the Brahmasthana (according to Vaastu principles) with a floor pattern in leather finish Kota to mirror with the hanging light on the upper floor ceiling. A sedate table centers the space composed using teak wood and epoxy raisin. The turquoise chairs efficiently delight the space with its charm.

The Puja room doesn’t lag in making its presence felt either. The two-shutter door is done in dark polish with traditional paintings and inlays. The main temple wall is beautifully done in Pichwai art with stunning colors; to aptly get framed by wooden arches-an an eloquent space and yet so simplistic.

Predominantly white! The open kitchen dwells in its monotony with whites to only allow a yellow for an open niche. This modest setup is enhanced with the Indian traditional tiles- Galicha, to slightly fancy the aristocracy of the space. The wooden logs from the existing trees on site are reused for the breakfast table.

A deep wooden cantilevered staircase acts as a design element in itself, ornamenting the stair-well with its classic attributes; adjoining a hand-wash area in raw wood. The family seating on the upper level is an artistic composition with a peripheral seating painted in vintage style to uphold the character with its dominant fabric seat. A small arched niche attains the thematic blue serving as an artwork in itself.

The master bedroom is minimalistic with wooden flooring and veneer furnishings. An overpowering Yellow Jaisalmer stone is used for the bed back with a custom-made light fixture. The wooden shapes are fixed in the yellow stone cut-outs to also incorporate an aesthetic element in here.

The daughter’s bedroom is a down-to-earth compilation acquiring ample natural light. A maple pink textured wall along with an M.S. Jalli accentuates the bed wall in here. The teak wood furnishing and its minimal designing adjourn the room with its soulful essence.

Indeed, a reposing character was chosen for the grandparents’ bedroom with its white texture wall not only enhancing the reflectivity but also the voluminous aspect of the space. A stand-alone teak wood wardrobe unit is stationed with its nominal inlay to aspire the users in their daily regime.

This intended fusion of contemporary designing with traditional elements is highly energizing.With a poised and tranquilizing attire that the house drenches in, it becomes nothing but like a day-dream come true.

The post A Vaastu Home with Its Modern-Traditional Elements | Studio Imagine appeared first on The Architects Diary.