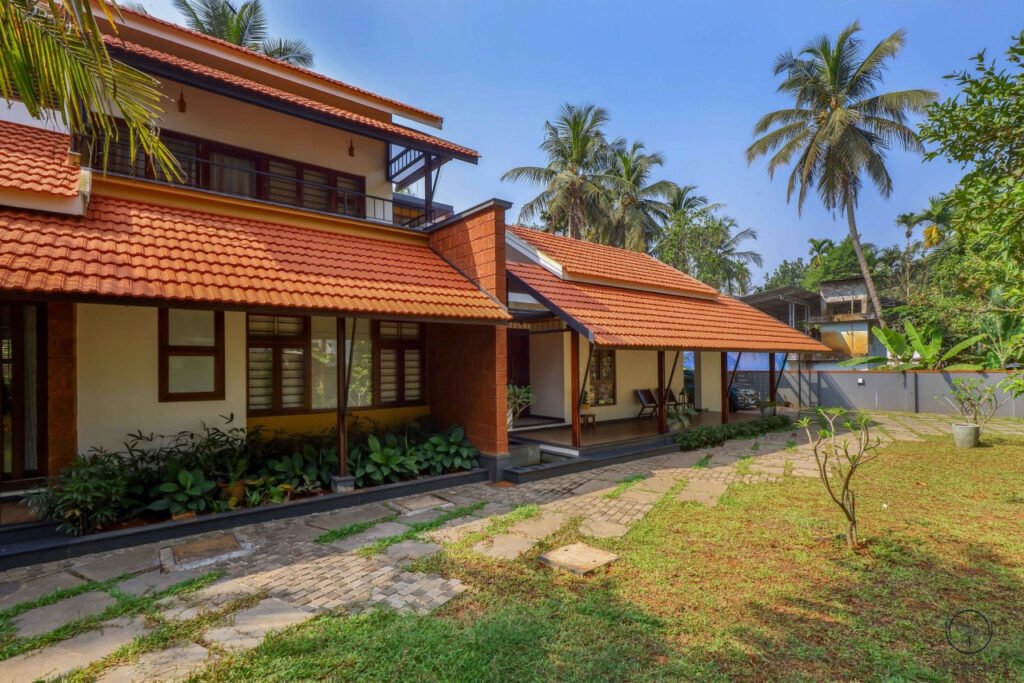 In the city of dreams, Kozhikode, just tucked away from the chaos, in a friendly neighbourhood with homes all around, was 17 cents of land. On a rather broad site, a linear planning was a conscious attempt to huddle all built spaces together making for a cozy abode while leaving much of land as green frontage.

A couple, where the husband is an NRI visiting the family once very year and the wife a faculty at the Government Arts & Science College, an hour’s drive from home, came to us wanting a space for themselves and their 3 little munchkins- 2 boys and a girl, all studying in lower primary school.

In the discussion for what their dreams should manifest like, we saw a contrast. When the husband talked of minimal aesthetics, just enough spaces and interior treatment, the wife spoke of traditional detailing and ethnic reminiscence. The husband being a banker by profession and the wife being a dancer by passion, it is quite a combination we had struck on. Now we need to get them home. How do we?

However regarding their home’s overall appeal they were as synced as can be. They wanted a very contextual aesthetics that blended in and kept true to its sense of place. Low maintenance was mandatory.

Tackling this scenario, the obvious approach ahead was to keep both, equally live in the canvas. We struck a balance by designing a residence having minimal aesthetics amalgamated with stark traditional details here and there such that both exist.

However one would instigate the other and the much contrast may not give each of them a sense of harmony. So conceptually we approached to strike a middle ground between the two. Minimal yet traditional flavours. Breezy, clutter free yet tasteful.

The linear planning helped tuck the private spaces away from the front landscape, keeping all common areas with a wide view to the front landscape and adjacent garden pockets. A modern interpretation of the contextual aesthetics was attempted in the home’s design details.

Full wide wall openings look out to much open spaces negated the otherwise humble space dimensions. The linear connect between the common areas and private rooms sought to be a gallery of sorts with a wall set for family photos and likewise.

Local materials like the teracotta roof tiles, jalis and the exposed laterite stone walls grounded the built form in a way its existence lay, one with the ground.

The subtleness in the predominant colour palette and occasional pops in an ethnic tone and certain accents using wood details, ethnic prints on fabrics, etc. brought the minimal and the traditional together in harmony. Breezy will still artistry.

The entire front yard walked into the common areas of the house, gracing the insides blissfully with ambient natural lighting and much breezy air movement.

Much to the delight of the couple who dreamt their own contrasting visualisations of their home to be embraced this abode with quite contentment as a place they both can be.

The post A Residence Having Minimal Aesthetics Amalgamated With Stark Traditional Details | SATKRIYA appeared first on The Architects Diary.