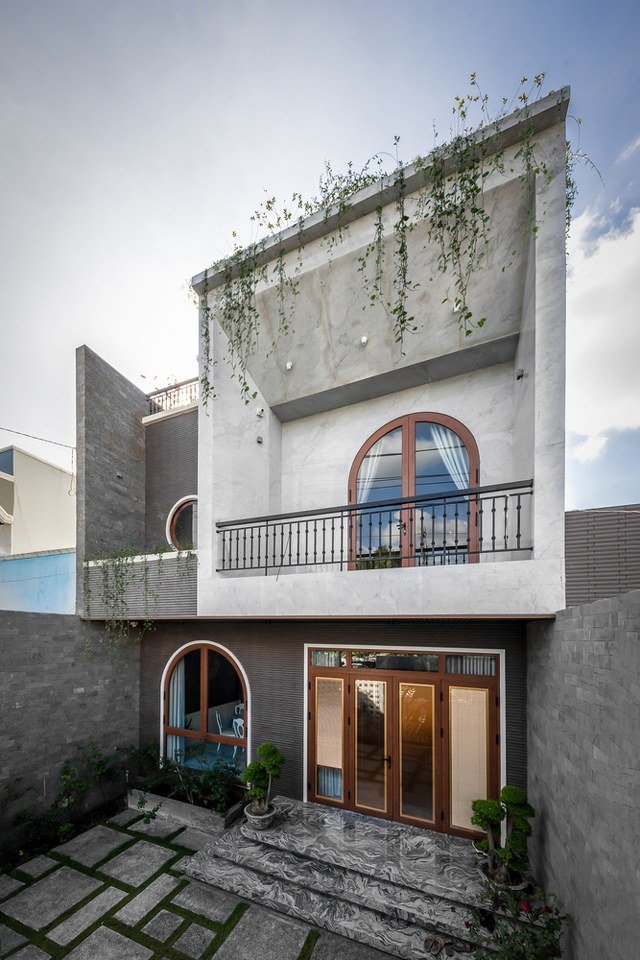 3Become1 House is located in Soc Trang, a small city in the Mekong Delta region, with a diversity of nature, culture, and people. This place also preserves many typical architectural marks, intersecting Vietnamese, Chinese, Khmer ethnic groups through many different periods.

Architecture – 3become1 house is renovated from three separate tube houses to become a unification and satisfies all functional requirements of the owner. Before the renovation, this house had many limitations: small bedrooms, lack of natural lighting, swelter, wet and degraded bathroom, long and dark corridors, and no garden or landscape. The facade of the house before the renovation was not similar, which had not created an emphasis on shape and color even though it is located on a large and busy road surface.

The existing front yard was covered, located close to the road, and quite high compared to the sidewalk so the architect had lowered the floor while removing the roof to return the garden court. This has created a setback space and limited the noise pollution, dust from outside and this garden also absorbs and reduces the solar heat.

The entire foundation and columns are retained to limit the impact on the structure of the house. The walls between the old houses were removed, bringing large and connected spaces, fully meeting the long-term needs of the owner. The redundant staircase is replaced with a large skylight which is enough for natural light to diffuse into every corner of the house and the trees inside can still grow naturally. Based on the natural lighting, the house does not have to use electric lights during the day to reduce and save energy consumption.

The new facade is a perfect combination between modernity and tradition. The gable roof and curved arches evoke familiar memories of the old houses and still retain the harmony of architectural form with neighboring houses. Old baked bricks are reused to bring a revival of traditional values and the red brick color and zigzag tile pattern help the house be identified from a distance and create a very unique personality for the house. The breeze blocks are arranged in suitable positions to receive natural light and ventilation, but still keep the privacy of the owner and help the house “breathe” by itself.

Interior – The interior of the house is designed with a modern style mixed with traditional Asian features. The ground floor is a completely open space, filled with natural light, including the kitchen, the family tea table, the living room. Partitions are not used, to create intimacy, coziness, and the connection of family members.

Old items bearing many memories of the owner are also used and in harmony with the new interior. Modern living room, highlighted by a raw concrete wall decorated with a picture made of real lotus leaves, evoking a familiar feeling of the countryside of the Mekong River Delta. The details are inspired by the traditional culture of the Khmer whose population accounts for more than 31% of the Soc Trang population.