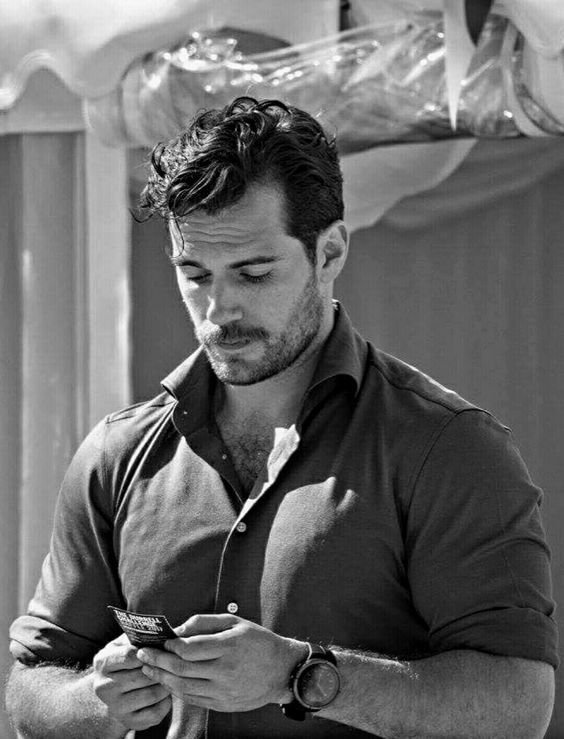 The Man of Steel, Henry Cavill don’t need no introducing. This absolute papacito is one hell of an actor, gentleman and dog person (worth mentioning, eh?).

Pop yo popcorns, for you’re in for a treat, if this gem is your favourite.

Don’t taste the white chocolate, they said. BE the white chocolate. And thus, I became. See this and more in the latest edition of The Rake magazine. Before you run out and discover the wonders contained therein however, I’d like to thank the most eloquent Editor of the magazine and writer of the article, Tom Chamberlin. The pourer of white chocolate herself (read: stylist), Jo Grzeszczuk. The very talented photographer, Kalle Gustafsson. And also a special thanks to Mark’s club in London for the second to none setting. @therakeonline @tfchamberlin @grzeszczuk @Kalle_gustafsson @marksclubmayfair

Hold our curly fries, we came here for Henry’s curls.

Henry Cavill, ladies and gentleman, for the heart. View 2-3 pictures everyday, for a healthy heart. Beware though, overdose of this charm is fatal.

Warm up phase for Superman training started today! Posting this pic to set myself a minimum goal…and force myself to actually keep going haha! @gritandteeth

Did you know, Cavill was labelled “unluckiest man in Hollywood” by Empire magazine for his unsuccessful auditions in 2006’s Superman Returns and as Cedric Diggory in Harry Potter and the Goblet of Fire (2005)?

G’day to those that are down under! Thought I might drop this here because its one of a few photos you might find, alongside some words from me and about me (yay and yay), in this month’s GQ Australia! To those that are up over, despite having been to Australia a number of times, I have never had a, or indeed seen a, shrimp on a barbie (BBQ), go figure. Not sure it’s even a thing. #GQAustralia #NoShrimpsOnTheBarbie @GQAustralia @BuzzWhiteStudio @LivHarding

He worked hard to get in suitable shape according to his movies.

For The Count of Monte Cristo, he lost twenty-one pounds. Annd, for Man of Steel, he started consuming 5,000-6,000 calories a day to keep up with the workouts.

Come, we clap for you, you hardworking hunk.

Yesterday I was running around a bit so I missed the chance to post about Endangered Species Day! Better late than never though eh! This a picture of me holding a critically endangered Ploughshare Tortoise. While at Durrell Zoo over the weekend I had the opportunity to get close to this little guy and make friends. Turns out he likes tickles…who knew? Check out www.Durrell.org to learn more about these beautiful little guys and gals. #DurrellZoo #EndangeredSpeciesDay #PloughshareTortoise

Now that the Bear and I are reunited I felt that it was time for a renewal of oaths to each other via some good old fashioned grooming. These shots are taken at 20mins in, 30mins, 60mins and 90mins…..still got some work to do . #PackMates #AmericanAkita #50PoundsLighter #Kal N.B.(nota bene) Kal didn’t groom me…he has many talents but opposable thumbs is not one of them. Edit: I removed the hair between 30,60 and 90mins! So it’s 3 times as much as you see in the last photo!

Henry got this pupper during the pre-production for Batman v Superman.

We see our future in this picture.

While I am not American, my faithful bear is not only American in name but was indeed born in Arkansas so I figured it only proper that he have a Thanksgiving treat! Pretty sure a full turkey might have been a bit much so I went with a chicken…. Happy Thanksgiving to you all! P.S I did not actually eat any of the raw chicken…I was just there for moral support. Kids…don’t eat raw chicken. #HappyThanksgiving #AmericanAkita

For some of the re-shoots for Justice League, Henry’s mustache couldn’t be shaved off for he grew it for his forthcoming role in Mission: Impossible; hence it had to be removed by CGI.

Only, recently Mission: Impossible – Fallout director Christopher McQuarrie admitted that the moustache did not serve any real purpose.

Nope. Henry had a full beard on his previous film (Nomis) and presented that look to me the day before we started shooting. We went with it on a whim. https://t.co/ImxGcXG74e

And they burn hearts and the remedy is, also, ironically these eyes.

And inclines us to sin.

Whatever he is posing to read is our fave from now on, undoubtedly.

Sunshine smile that lights up its surroundings.

Not many people know about Henry’s role as Charles Brandon, in  Showtime’s The Tudors.

He looked splendid as a Lord in Tudor dynasty. Absolute royalty.

If you haven’t watch this show, then do so now, you’ll fall in love with Henry all over again.

We love you, too.

Now this royalty can rule our hearts forever, without question.

One last for this hombre man.

You know what to do now, right? Come let’s binge-watch everything this Man of Steel has starred in.